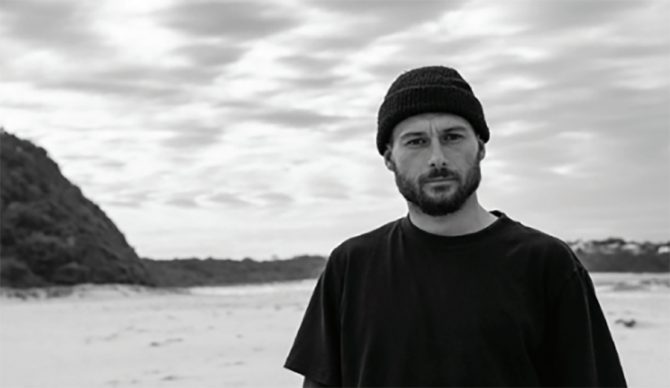 Dion Agius, ahead of the curve. Photo: Courtesy Standard Procedure

There are few people in the world like Dion Agius. A true renaissance man in this day and age, the professional surfer/filmmaker/innovative businessman may be a jack of all trades, but he’s far from a master of none. He’s won comps, dropped mind-bending surf edits from both behind and in front of the lens, and launched successful business ventures such as Epokhe Eyewear, Octopus Traction, and most recently, Standard Procedure sunscreen. Starting a business venture during a pandemic might sound difficult, but for Dion it’s been a challenge worth tackling.

How’s it going down on your end of the globe? Any good waves recently?

This time of year is pretty bad for us actually. It starts to get pretty small and shit-windy in the summertime. Where I live in Tassie is not too bad because you get some little swells normally but I’m up in Byron Bay at the moment and it’s pretty flat. It’s warm and hot, the water’s amazing but yeah, it’s pretty inconsistent this time of year. But the start of the year like autumn into winter was one of the best we’ve had so far. So I can’t really complain. I spent three months traveling around New South Wales and it was just cooking. You couldn’t go to Queensland or Victoria but as long as you were in New South Wales there was so many spots to get good surf.

So you were on the mainland most of the pandemic?

Yeah, Tassie had closed its borders and if I went home I would have to do two weeks quarantine in a hotel so I was like fuck, I’m just gonna wait until they’re done and the borders are back open so I didn’t go back while it was really good but when I did go back in the beginning of the summer we got some pretty good days and some pretty massive ones where you just go in there and have a go at a couple and then watch the guys that were really gnarly do their stuff out there. They’re insane.

I’m back in Byron now. We’ve got an Epokhe office in Byron, and it’s nice to be able to do things on site especially because that whole business has been pretty nuts coming into summer. So probably wrap up a couple more weeks here and then head back home to Tassie and get a couple of weeks of just chillin’.

So you’ve already had Epokhe going, but you just launched your sunscreen brand, Standard Procedure. How has that been going?

Standard Procedure’s just starting out honestly, I guess you could put the official launch down to like probably a month ago now. I really wasn’t sure what was gonna happen with the pandemic and everything. I don’t know if you guys have had the same thing, but It’s been crazy, because we came out of lockdown and there was this crazy side effect that all a sudden, everyone just wanted to travel within Australia. So all these people are going to the little coastal towns all around Australia to kind of get out of the house or wherever they’ve been. And the byproduct of that has been all the little retailers in those regions or local surf shops have just been going crazy. And that’s just so good, because a lot of those smaller retailers got absolutely smoked During the lockdown and all the fires we had earlier in the year as well.

The South Coast region of New South Wales got completely fucked by the fires. So it’s been amazing for those retailers to have this kind of light on the other side of it all. We were obviously really scared when the pandemic went down for Epokhe. Zepha Jackson and I were working on Standard Procedure, but just as we were getting set to go to market the shutdowns lifted so I feel like we got into the business stream right as it started flowing again. Four-six months ago when we were kind of in the starting period it was a bit scary. And we definitely wouldn’t have imagined that six months later we’d be in a position where it would have a really strong start. A lot of uncertainty, But it’s been such a nice time to launch which is really weird to say, but yeah, surely the demand is big enough. So we got really lucky with that.

That actually makes a lot of sense. Up here the surf industry has been blowing up, too. I’m pretty tight with a surf shop here and like you’re saying, demand is crazy, but we can’t even keep stuff on the shelves now. There’s all sorts of crazy supply chain issues, for example neoprene is just impossible to find. Have you been dealing with anything like that or has it been smooth sailing?

There’s kind of two parts to it. With Epokhe we had some big orders that were out of juice for summer but obviously it’s a big period. The main thing we have noticed is shipping is pretty difficult at the moment. We’ve been doing most of our shipping on boats because there’s barely air freight, which we used to do a lot to get stuff in quick. That’s one thing that I’ve been stoked on with Standard Procedure. We’re all Australian made. It’s made on the Sunshine Coast, with my business partner Zepha’s family business, and so there’s absolutely no shipping issues. So yeah, two different ball games, but we’ve been lucky enough that both businesses haven’t suffered too much. The one thing on the design aspect with Epokhe is when I’m working on frames and bringing those to market, the time period of that critical path to getting those out has extended because factories are running at 70 percent. For forward orders and next year’s stuff I’m having to get everything signed off on a lot sooner. So that when it takes a couple months longer to get them back from the factory they’re still on time. There’s a shuffling there. But on Standard Procedure, having everything locally produced by people I know personally has been awesome and we’ve been able to easily keep up with the increased demand from everyone wanting sunscreen because they’re out in the sun.

Crazy how rebound from the pandemic has come about. And now local manufacturers suddenly have this leg up of not having to rely on the supply chain. It’s pretty cool and kind of inspiring.

Yeah, it really is, and it’s probably a big reality check for a lot of people looking at supply methods, shipping and things like that. Definitely the local aspect of the business is a huge advantage at the moment.

That’s great to hear. Can you tell us more about Standard Procedure?

Yeah, so Zepha, my business partner, comes from a family of sunscreen makers. They started their business 35 years ago and Zepha grew up on the road with her parents selling sunscreen on the Sunshine Coast. It took off, and now they have a pretty big operation up there. They supply a lot of products to the Australian government for schools, the Skin Cancer Council, groups like that.

Zepha has been wanting to start her own brand so she sent me a bunch of products, like, “Hey, can you test this sunscreen for me? It’s a formula my parents have been perfecting over like 30 years.” I started using it and was like, holy shit, this is really good stuff. So she was stoked to hear that, and told me her idea, which was Standard Procedure, and asked me if I wanted to partner with her on it. She’s got all the backend sorted and I do the marketing and frontend which is kind of more my world because backend numbers and business makes my head just fucking spin off its axis and that’s where Zepha is a total guru.

So it ended up being an epic symbiotic partnership. That was six or seven months ago. It’s been a really fast turnaround but being a family business, we were able to be pretty nimble. We wanted to get something out this summer so we started making product, tweaking as we went, and ended up with the sunscreen that we’ve got now. Obviously I’m a bit biased but it’s probably the best sunscreen I’ve ever used. It’s got all the good stuff that you that you want in it and nothing that you don’t. And the response from everyone that we’ve given it to and retailers has been super positive. I never would have thought that there was a gap in the market for another sunscreen but I think the fact that it’s Australian made, reef friendly, and the packaging is retro and kind of fun are major plusses and people seem to be digging it. And obviously when you get a positive response from people for something you’ve been working your ass off on, that’s super fun and rewarding.

Probably kind of tough but how would you describe Standard Procedure sunscreen?

I used to be sponsored by a mineral-based sunscreen company and to be honest, just for lack of a better way to put it, it didn’t really work. Going out surfing and shooting we’re in the water for three hours at a time in the blazing sun in Australia and it just didn’t hold up. And that was really disheartening, representing a company whose product I didn’t believe in, so that was a big consideration for me because I don’t want to go down that road again. I only want to work on something if I’m 100 percent sold on it. And that’s the difference with our product. It fuckin’ works. Super water resistant, non greasy -– which obviously is pretty important not to have it running into your eyes or all over your hands and slipping off your rails. It’s fragrance free and best of all it doesn’t leave any weird white residue so you don’t get out and go to a coffee shop with a ghost face. It’s just a good honest product. And working with the family that produces it means that we can be super competitive on the pricing as well.

You think it’s gonna be coming to the states anytime soon?

Well, it’s funny because there’s a few hurdles that have to be crossed for the different regulations in the U.S., but because Zepha’s family’s dealt with that before, we’ll be able to go to the U.S. pretty soon which is lucky because I know that a bunch of Australian brands haven’t been able to. We’re just trying to find a distributor over there at the moment, and we’re really hoping to get over there by the U.S. summer.