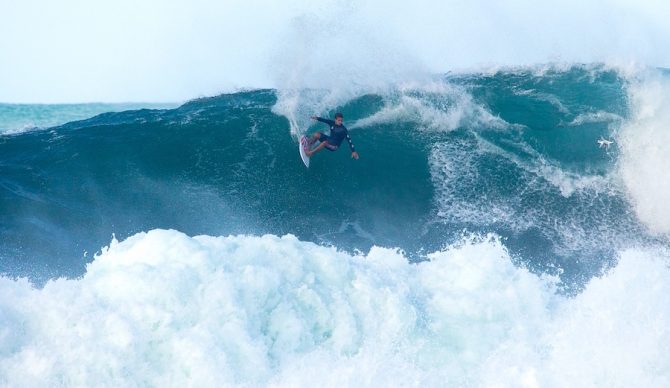 Every Tuesday (Tubesday if you’re on the North Shore), we, the surf-hungry masses, have a chance to weigh in on the decision making of those far more qualified than us (actual surf competition judges) to decide what the best waves of the week are. And we the people demand to be entertained. Voting is entertaining.

Not only that, but when it comes to voting for the Vans Triple Crown clips, voting is easy. Just head on over to the digital entries page on vanstriplecrownofsurfing.com, peruse the entries and choose your favorites by going to the clip page and clicking the “Vote” button. But be methodical! You can only vote for one male and one female entry per voting period, and once you’ve cast your vote, it’s cast.

Last voting day (December 28) came and went pretty uneventfully. There hadn’t been much in the way of wave-action on the North Shore, so the handful of clips that were up for consideration were mostly ridden on progressive craft. Some small tubes at Pipe, as well as some runners at Sunset and even a noseride or two at Haleiwa courtesy of John Michael Van Hohenstein. The two that came out on top in the judges eyes were two waves on progressive craft at Pipe. Zoë Mcdougall’s wave (above, shot by Artem Savitckii) on a 5’3″ Carson Meyer twin fin got a score of 12.5, and Kū’i’o’okalani Young scored a 14.8 on his 6’0″ Akila Aipa Twin + trailer in the wave below shot by Peter King.

This week, there’s more waves to choose from, namely a fine selection of decently-sized Pipeline cuts, both on progressive craft and more “traditional” potato-chip thrusters. That being said, as far as waves that will actually win the contest go, I have my eyes on the swell coming through this week. Thursday and Friday could be very good days at Pipeline. I’m sure we’ll be seeing a ton of action go down in real time, and a ton of rad clips start cropping up over the weekend for next Tuesday’s voting. Stay tuned!