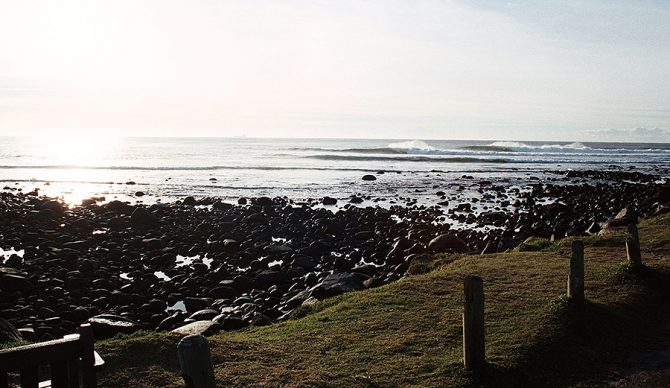 One of the perks of my short-lived career as a construction project manager based in Hell (aka Johannesburg, South Africa) was getting to travel to coastal regions and maintain some sort of status as a surfer. Some of the other perks included a colorful assortment of ulcers, cancers and nervous conditions accumulated in the soft tissues of my body.

Take the gig, for example, to finish and hand over a furniture store in the “Hemingways Mall” in East London, aka “Slummies” or sometimes, Slumtown. Living in Jo’burg, every wave I managed to score at the time was a great wave. Eastern Cape surfers don’t know how good they have it. After one of the most memorable sessions of my life—banging, six foot, chunky runners down the point, eight guys out—at the crown jewel spot in Slummies, Nahoon Reef, I exchanged a few obligatory grunts with some locals on the beach.

“Ja, had some cookers, you just have to pick them,” I answered.

“Nah, brah. Too crowded. Sections not linking up,” is what I heard in return. Generally, one doesn’t argue with locals, so I just carried on de-suiting and watching what I thought were smoking good waves run down the point. The local didn’t even bother to get out of his 4×4 and soon was gone.

Anyway, after work one day and just before dark, I made it down to the Nahoon Reef parking lot for a quick surf check. This particular trip just happened to coincide with the first proper swell of the winter season. It was the type of swell that shows up all purple and pink on the synoptic charts and has surfers the length and breadth of the county frothing at the mouth. So there I was, parked in the Nahoon parking lot on the eve of this mega-swell checking my email when I was startled by a young man who materialized right beside my window.

“Oom [uncle], please help me, Oom,” he begged. “They robbed me, Oom. Please can you take me home to Gonubie?”

Being South Africa, the first reaction one has to an individual suddenly approaching their driver’s-side window, especially if the window is open and an iPad in plain sight, is to scream “Oh, please help me, Jesus!,” to deploy the driver’s-side flamethrowers that now come standard in every South African-manufactured vehicle, reach for the nine mil. under your seat and start making peace with your maker.

But this was different. The young man approaching me was about twenty years old at my first guess, wearing workman blues with the right side of his face covered in blood. His eyes were wide open in terror, his T-shirt was torn from neck to navel, he was smeared with beach sand and his knuckles were blood-smeared too. My first sense, sadly, was to be suspicious. “Oom, please, please help me,” he begged.

“Ok,” I said, “get in the car.” I opened the passenger side door. He moved around and sat down, hunched forward in the seat, trembling. I handed him a bottle of water. “Take slow sips,” I said, “try to breathe deeply, slowly.” He nodded and took the bottle, raised it to his mouth to sip and could barely do so from how hard his hands were trembling.

“They put me in a taxi, Oom,” he told me. “They have had me since three. They got my phone.” It was about five then.

“Hendrick,” he said, fighting back tears. “They got me just after work. They pulled my shirt over my head and pulled me into a taxi. I think it was about five of them.”

“No, Oom, not them,” Hendrick, said, shaking his head. “I’ll give you my girlfriend’s number.” I dialed the number and while it was ringing I handed Hendrick my phone. When his girlfriend answered, Hendrick broke down in tears. “They robbed me, babe,” he said. I could sense an argument. “Please, please, babe,” Hendrick said, “I can’t talk about this now, please just come.” There was further talk before Hendrick handed me back the phone, “Please can you take me to Gonubie. It will take too long for them to get here, because of the traffic,” he said.

I took back the phone and told Hendrick we’d work something out. “What is your girlfriend’s name?” I asked, calling the number back.

“Cindy,” Hendrick replied. I called and told Cindy, who broke down in tears, my name. “I’m with Hendrick,” I said. “He is OK, but in a state of shock.” I told her to get her mother and come out to where we were and I that I would wait and we would work something out. Then I called the police—which took some effort as no-one answered the phone at the East London police station. Eventually I got through to the equivalent of 911 and painstakingly tried to describe where we were and what had happened.

Then Hendrick and I waited. I asked him a lot of questions about what had happened. He had left his workplace, which was a Mercedes Benz workshop, downtown somewhere neighboring a place apparently as evil as Hades, or maybe even Hillbrow, known as Oxford Street. The black lady in the car next to us who had by then come over to us to help, told us: “Oxford Street is dangerous. I was mugged there. Stabbed five times,” she indicated her left shoulder. “I was with my daughter. They would have raped her if we hadn’t got away.” That’s all she said about that and her eyes misted over. “It doesn’t matter who you are,” she said.

Hendrick had missed his lift home, so he’d texted Cindy that he would get a metered taxi home. He walked a short distance down Oxford Street then took his phone out of his pocket. “I was on the phone to the taxi company and suddenly there were two guys next to me. They put a gun into my side and said, ‘Drop the call.’ So I dropped the call dead. They said, ‘Who was it?’ And I told them it was the taxi company. ‘Did you tell anyone to come here?’ they asked and I told them no. They grabbed the phone—it’s a Galaxy S3—and they asked what the passcode was, which is the letter of my girlfriend’s name—C. They cocked the gun against my side and so I told them, and they got my phone.”

They pushed Hendrick into the mini-van taxi, pulled his T-shirt over his face, pushed him down on his back onto one of the seats and tied him down with the seat belts. Then they searched him, somehow missing the wallet in his back pocket. They drove from place to place; Hendrick couldn’t work out where or in what direction they went and he said no-one spoke. After about an hour two of them pulled him out of the taxi and he found that they were at a deserted beach. One of them held a knife to the back of Hendrick’s neck and told him to walk. They walked him some distance along the beach until they came to a bushy area.

“They told me to walk into the bushes, Oom,” Hendrick said. “Then I shouted, ‘There is someone there!’ and when they looked, I managed to hit one of them.”

“Did you drop him?” I asked. “It looks like it, seeing how your fist is swollen.” Three knuckles of Hendrick’s right hand were red and swollen into one, the size of a golf ball.

“He stayed down,” Hendrick said. “Oom, I’m actually provincial in kick boxing…” He trailed off and fought back tears again. “I got away from the other one. He started running, then I ran. I don’t know where I was. Then I got here.”

“I know it sounds dodgy,” I said, “but I have some medication with me, proper anti-anxiety stuff.”

“No, thanks,” he said. I am nineteen years old and I have had a heart attack already.”

“Are you OK, my bru? Seriously, should I call an ambulance, are you having palpitations?” I asked.

“Are you sure? Be sure,” I said. “Maybe you should take a stay in hospital. They’ll give you some good drugs there, bru!” Hendrick laughed and I knew he was going to be OK.

A short while after that Cindy and her mother pulled up Hendrick started trembling harder than ever. “Please tell her first, she is going to fight with me, please talk to her first, Oom.” I really, really wanted to ask Hendrick then to stop calling me Oom—do I really look that old?—but I thought I’d wait for a chance for that a bit later. I walked over to Cindy and her mom arriving in the car and told Cindy, “Hendrick is OK, but he is in a serious state of shock, take it easy on him.” Cindy nodded and we all went to my hired car where Hendrick was.

Hendrick broke down as Cindy approached and when she reached him she took his head in her hands said something like, “I’m sorry this happened to you, BUT WHY DID YOU LIE TO ME? YOU TOLD ME YOU WERE IN THE METERED TAXI CAB ALREADY! Please can I have a moment with him,” Cindy asked us. Hendrick begged Cindy off and she dropped it and asked him if he had his heart medication on him. Then the police arrived. Cindy and I and her mom moved off slightly so Hendrick could give his statement to the constables.

“He doesn’t listen!” Cindy replied. “I’ve told him, I don’t know how many times, he has to arrange a lift before and now look at all this. My phone is stolen and all the inconvenience for everybody!” I made some comment to Cindy and her mom; something about this society of ours being sick and it’s sad that this is just how it is now. “We should be able to take out a cell phone and call a taxi and not feel like it was our fault for nearly being murdered for that,” I said. I reminded them that he was lucky to be alive, that the phone was nothing in comparison, and Hendrick was very brave. You could see Cindy’s mom knew what I was talking about. Her husband is a lieutenant colonel in the police, she said, and she is an attorney. So she knew a thing or two about crime.

By then the constables had finished with Hendrick’s statement and it was decided where to go for the paperwork along with sorting the details of the getting serial number of the cell phone for the case and the insurance and so on. We all shook hands and said thank you to each other and went our separate ways. That big swell never did arrive the next day, the direction, or something or other was wrong, but there’d be another one, another day, I was sure.