Wetsuits Are Nasty, and Patagonia’s Attempting To Clean Them Up 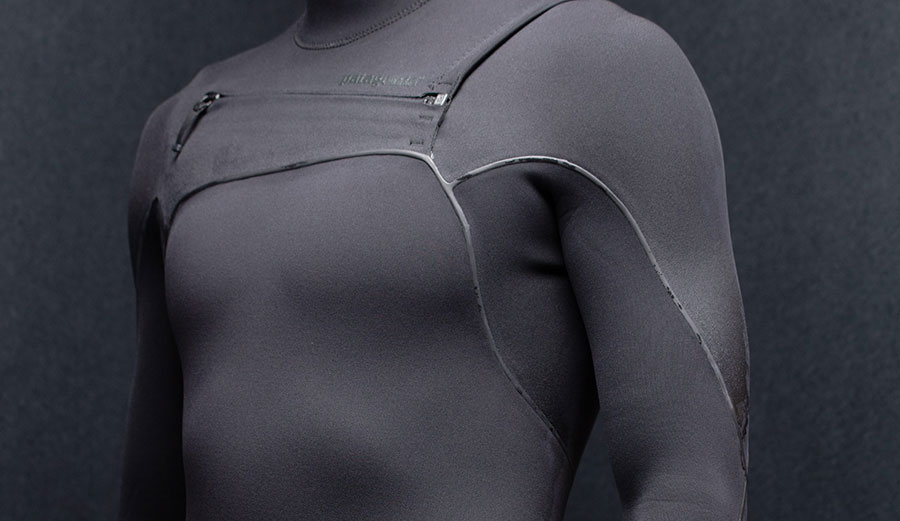 Unless you were born with the karmic grace of Hawaiian ancestry, it is likely that you squeeze into a neoprene tuxedo before descending into the magical blue-green briny deep. You know what I am talking about—that smelly black morass, semi-dry lump of love that keeps you warm and snugly while being tossed around the waves. The piece of gear no sane California surfer goes without—the wetsuit.

Let’s talk about what your wetsuit is made from. Rubber? Neoprene? Latex? Aren’t they all the same? Generally, there are two types of rubber—natural rubber that comes from a tree and synthetic rubber derived from petrochemical sources.

The first use of rubber is thought to have been by those loco Olmecs, who centuries later passed on their knowledge of natural rubber from the Hevea tree in 1600 BCE to the ancient Mayans. They boiled the harvested rubber to make a ball for their Mesoamerican ballgame, which was similar to racquetball. Word on the anthropological street is that if you lost during one of those games you were slated for decapitation and served up for sacrifice, Pablo Escobar style. It sucked to be a loser. Luckily, nobody is going to cut your head off for surfing—unless perhaps you paddle out at Lunada Bay.

Traditionally, your mainstream wetsuit is not made from natural tree rubber—it’s neoprene. Neoprene was invented by a DuPont scientist in 1930 after attending a chemistry lecture from a priest at the University of Notre Dame. Divine intervention? I won’t get into the chemical details of producing neoprene, but as you can imagine it’s not like growing tomatoes in your organic garden.

The process of producing neoprene is called vulcanisation. It involves mixing petrochemicals with additives such as sulfur and other curing agents, then heating and pressurizing the wicked environmental witch’s brew into large, thick sheets of neoprene. Patagonia’s wetsuit development manager Hub Hubbard knows how toxic the process is and put it straight when he said, “neoprene is nasty stuff.”

A handful of companies use a material called geoprene, which is derived from limestone. Though it isn’t oil, limestone is still mined from mountains using heavy machinery and energy-intensive extraction methods. In order to process the limestone into sheets of fabric, the limestone is crushed and heated at very high temperatures and introduced to chemicals to produce acetylene, which is the basis for limestone-derived polychlorene.

Once the rubber is cut into the thickness required for your wetsuit, nylon or polyester fabric is glued onto the rubber. This fabric makes the rubber part of the suit soft against your skin and also allows for screen printing logos and words like Rip Curl or O’Neill. More glue is added to connect all the different pieces and then at the end, the seams are sewn and taped. Add a zipper or two and a few strips of velcro and voilà—you got your wettie.

Ready to move to Hawaii where you’ll never need to wear another petrochemical suit? Don’t book your ticket yet, because our friends at Patagonia just turned the wetsuit industry on its head. This fall they are releasing, in their words, “the world’s first and only neoprene-free wetsuits made with natural rubber from sources that are Forest Stewardship Council® certified by the Rainforest Alliance.”

Certified stewards, alliances, and councils—oh my. But do they work?

Steve Jobs once said, “Be a yardstick of quality. Some people aren’t used to an environment where excellence is expected.” Regrettably, if you have to buy a new wetsuit next year, or if it falls apart as the winter swells march in, then it isn’t sustainable nor functional—eco products must perform as well as their counterparts and provide equal or better functionality over their dirty oily friends.

Don’t get me wrong–I have great respect for Patagonia and what they are trying to do. They claim in their press release on their new wetsuits that “using natural rubber reduces the CO2 emitted in wetsuit manufacturing by up to 80 percent.” In the meantime, before we start holding hands and singing kumbaya, we need to really understand what is happening here. Using natural rubber à la Olmec style is a huge leap forward, but there is still factory processing going on—and how about the glue?

Additionally alarming, Patagonia states that they are sourcing the wetsuit material in Guatemala. Does that mean they are extracting the natural rubber in Central America and shipping it to Asia for manufacturing? Then shipping it back across the ocean to us as consumers once it’s been produced? This seems like an extremely large carbon footprint to move all that material and product around the world.

I know it’s not perfect and Patagonia isn’t making any claims of saving the world one wetsuit at a time. I really hope this starts a new trend that attempts to steer our wetsuit industry away from petrochemicals. Patagonia’s new natural rubber wetsuit is definitely aligned with their mission statement to “inspire and implement solutions to the environmental crisis.” Regardless of the hurdles yet to be overcome, I’ll be purchasing one this winter in solidarity of their movement towards cleaner products, and so should you.

See more from Derek Dodds on Instagram@wavetribe and on Wavetribe.com