What Now? The ASP After Kelly 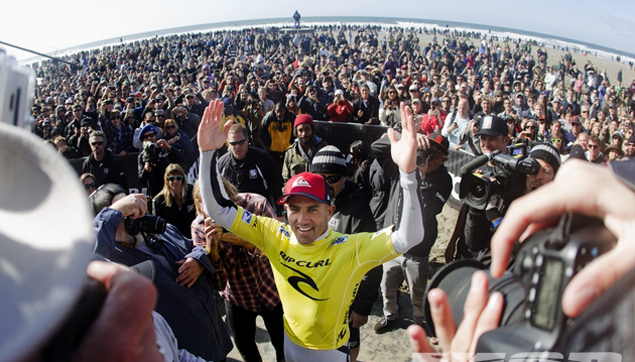 Kelly Slater’s once-in-a-generation talent has strengthened the ASP’s claim that it objectively recognizes the best competitive surfer on the planet – even if it hasn't mastered arithmetic. So what happens without him? Photo: ASP/Kirstin

For a weird moment at the beginning of Kelly’s (premature, we now know) round three, pseudo title-winning heat, I actually thought that he was Dan Ross. I had left the media tent and headed down the beach to watch the event with some friends.  We were a bit too far away from the contest scaffolding to hear the announcers clearly and we didn’t have the best sightline.  We had somehow gotten it into our heads that Slater was in white and Ross in red.  We heard Ross’s first score, a 7.7, and then watched as the surfer in red, at that time still thinking it was Ross, destroyed a left on his backhand.  Ross, it seemed, was absolutely schralping; surfing out of his mind.  We all looked at each other with a “what now?” expression on our faces.  At this point, all of San Francisco expected to watch Kelly be crowned champion on our beach, the unlikeliest place on earth for a surfing championship coronation.  It was supposed to be a rare bit of surfing history in our city.  I sprinted to the contest center, expecting to write about the disappointment in Kelly’s camp and the joy of the unsung Dan Ross, slayer of giants.

I pushed my way through a rabble of fans and hangers on, flashing my green media wristband to access to the belly of the beast.  At this point, I was still sensing a massive upset, wondering if a Ross victory would breathe fire into the rest of the contest, or usher in a letdown of massive proportions.  Once I got into the tent I quickly realized my mistake, felt like an ass, and watched history in the making after all (historic for entirely different reasons).  But when Slater hoisted the ASP trophy for the 11th time, drank champagne, then struggled to find words to fit the moment, the “What now?” thoughts came roaring back.  Eleven World Titles?  Ten didn’t seem altogether possible either, but now, with his 11th, Kelly has embarked on a championship journey to the absurd.

At some point, the ASP and its fans are going to have to come to terms with a pro surfing circuit sans Kelly Slater.  For many of us, in fact for any surfer under 35, there has never been a World Tour without him.  During his competitive absences, we crowned a couple over-due talents in Occy and Sunny Garcia, and the affable CJ Hobgood.  When Andy Irons rose up and started to set the competitive world on fire, Slater answered the call and provided one half of the best professional surfing rivalry since Curren and Occy.  Kelly has either been the official champion, or the best surfer on the planet regardless of ASP rating points, since 1992, the year I first started surfing.  His competitive longevity is unmatched in sporting history.

One could make a strong argument (although Bobby Martinez may feel otherwise) that Slater is the best surfer on earth.  When he wins the World Title, it confirms what any casual surfing fan as well as the wonkiest surf historian already intrinsically knows—Kelly is the best.  It suggests that the ASP judging criteria works, that the system is fair, that the best performer is properly recognized.  Say what you will about the subjectivity of a panel of human judges; few surfers would disagree that Slater has deserved each and every ASP trophy he has won.

When a team wins a Super Bowl, a World Series, or a Stanley Cup, their title run is the result of a million breaks falling their way, in addition to the team’s pure talent.  Championship teams, in other words, are buoyed by fortune: the ball bounces one way and not another, an umpire calls a ball instead of a strike, star players remain injury-free, whatever.  Talent matters, but so does random luck.  Slater’s once-in-a-generation talent, seemingly free from the vagaries of chance, has strengthened the ASP’s claim that it objectively recognizes the best competitive surfer on the planet, even if it hasn’t mastered arithmetic.

So what happens without him?  There has been grumbling about judging criteria, and plans for alternate pro surfing tours for years, but with the best surfer in the world attaching his name to the ASP World Tour, it remains the biggest show in town.  Maybe Kelly goes on to win a 12th, a 13th, a 20th.  Maybe he finally backs away.  But the day of reckoning will come: The  ASP World Tour without the greatest champion the sport has ever known.

A post-Slater ASP will be increasingly forced to confront its critics and perform some serious soul searching.  It survived Kelly’s absence in the early 2000s, and it can do so again, but without his transcendental force anchoring the organization, rival tour start-ups could have a much easier time picking off top names from the talent pool.  More elite surfers than ever have shunned the tour in favor of photo trips and retail lifestyle hawking, and these free spirits may either be ripe for the plucking by an alternate tour format, or be an inspiration to the next generation to shun competitive surfing altogether.

Slater’s most recent title has bought a little more time, but leaves the basic equation unchanged.  Kelly makes the ASP what it is.  What now indeed.