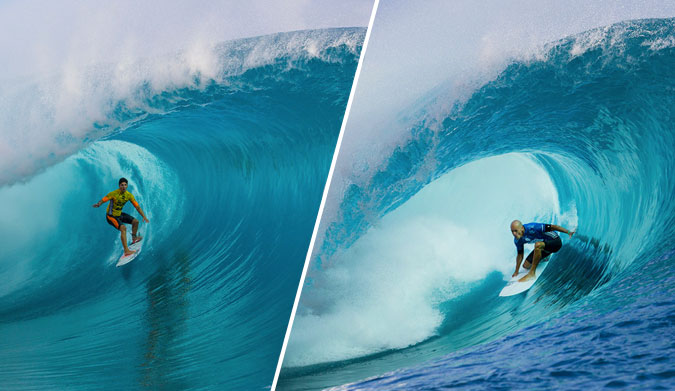 The world’s eyes were on the final of the ASP’s Billabong Pro Tahiti. The 42-year-old veteran Kelly Slater battled the young star Gabriel Medina in all-time Teahupoo conditions. It was said during the broadcast that when Kelly won his first world title, Gab wasn’t even born. And now, twenty years later, together they charged massive Teahupoo monsters that will stand the test of time in pro surfing’s history.

That final heat meant much more than the pretty hat and the glass trophy. Medina was aiming not only to win the event, but also the world title. On the other hand, Slater was surfing to defend his honorable four previous wins at Teahupoo, and the 11 world titles under his belt.

The Tahiti event was a perfect example of experience versus courage. I remember watching Kelly’s surfing on old films, back in the day when he still had hair on his head. And on the other side, there’s Gab, who’s not even old enough to drink. So what was the real battle about? The experience built up over the years against the courage of a young hero.

For us mortal surfers, I believe, experience is knowing your homebreak like the palm of your hand, while courage is charging at a spot you’re only visiting for a couple of days.

Life can be the same way for us non-pro surfers. Sometimes we face challenging situations, either on the water or in our day-to-day life. It’s a constant battle where the experience we have accumulated over the years tells us to play it safe and be confident in our game. And yet, despite the experience, courage comes along and dares us to fearlessly take on bigger waves (challenges) without looking back and going all in.

My dad once told me that experience is like a light that burns you as it lights up the way in a dark tunnel. And I believe that courage is running straight ahead without the fear of bumping into anything, trusting that the light ahead will light up the rest of the way.

As Medina teared up for his post-heat interview, it reminded all of us that he is also a sensitive human with feelings and dreams of his own, he taught all of us old and young surfers a lesson. Courage can sometimes overcome experience.

It’s sort of like when you’re applying for a job you are not qualified for, and you figure that since you have nothing to lose, you might as well act bold. Gab had a job interview for the title. He’s got the performance, the charisma and the ambition to become a world champion. Do you think he can pull it off ? Would you give him the job ?