What You Should Know About Surfing (Literally) Making You Sick 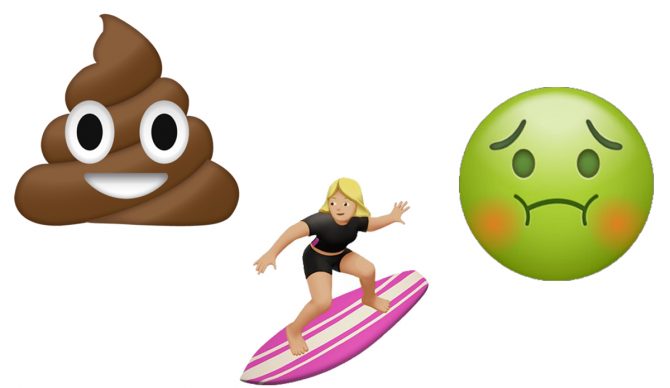 …it happens to the best of us.

Have you ever gotten sick after a surf session or a day at the beach?  Water pollution near many local surf spots can cause numerous illnesses and even long-term health issues such as the one experienced by Chris Schumacher, who acquired a soil-borne bacterial infection from storm runoff while surfing and almost lost his eye.

Polluted waters often contain many different disease-causing organisms (commonly referred to as pathogens) and surfers and swimmers are affected by both sewage-polluted water, which contains enteric pathogens (pathogens that live in human and animal digestive systems), and pathogens carried by urban runoff. The contraction of waterborne illnesses from these pathogens is often spread by the presence of these organisms in the water and inadvertent ingestion of the fecal or otherwise contaminated water. This can give a whole new meaning to having a “sick” surfing session.

Polluted beach water has been known to cause gastrointestinal illnesses such as the stomach flu, diarrhea, and vomiting, skin rashes, pinkeye, ear infections, meningitis, hepatitis A, encephalitis, staph infections (such as MRSA), parasitic illnesses caused cryptosporidiosis and leptospirosis, and even bizarre disease such as skin lesions. Viruses are often the cause of swimming-associated diseases and typically result in the majority of cases of gastroenteritis (“stomach flu”), hepatitis A, respiratory illnesses, infections of the ear, nose, and throat. Gastroenteritis, which may also be caused by waterborne bacteria, can cause symptoms such as vomiting, diarrhea, stomach aches, nausea, headaches, and febrile (feverish) symptoms. Other types of microbial disease that can be contracted by watermen/women and beachgoers include salmonellosis, shigellosis, infection caused by E. coli as well as other infections caused by amoeba, protozoa, and parasites in recreational waters which can cause giardiasis, cryptosporidiosis, amoebic dysentery, skin rashes, and pink eye. Urban runoff provides a whole new dimension as well through a “toxic cocktail” of herbicides, pesticides, heavy metals, and other pollutants that may not be regulated or monitored by your public health department and they also cause health effects that are not fully understood.

Epidemiological studies, such as The Beaches Study have found that “bathing in temperate recreational waters with known point sources of faecal contamination (such as domestic sewage or storm-drain runoff) has been associated with an increased risk for transmission of infectious diseases (including gastroenteritis, and febrile, respiratory, skin, eye and ear illnesses).” Individuals who enjoy high-exposure activities, aka surfers, are at greater risk of acquiring an infection since they are typically in the water for extended periods of time, have a higher number of head immersions, and subsequently, ingest more water that the average beachgoer.

According to an intense systematic review and meta-analysis published in the International Journal of Epidemiology on February 28, 2018 there is an 86% increased risk (odds ratio of 1.86) of experiencing symptoms of illness from waterborne pathogens from recreational activities in marine waters. The study, which was the first systematic review to evaluate evidence on the increased risk of acquiring illnesses from bathing in seawater compared with non-bathers found that bathers in coastal waters have a greater risk of experiencing a variety of illnesses from being in the water. So, if you get sick after surfing, there is a solid chance that it was from polluted water.

Many states and local municipalities have established ocean water monitoring programs, but these testing programs only consist of infrequent or limited testing testing during times of high usage which may include total coliform, fecal coliform, and enterococcus at marine beaches and E coli in fresh water. Testing for viruses, hydrocarbons, herbicides and pesticides, fertilizers, heavy metals, and other pollutants is rarely performed. Traditionally, the monitoring of microbial water quality for coastal waters used for recreational purposes (ie. beaches) has been regulated by measuring the concentrations of indicator microbes related to enteric pathogens that are found in the water. These microbes are typically found in human feces in high concentrations and are typically not pathogenic themselves, but indicate the presence of pathogenic bacteria.

While the these kinds of initiatives are essential for ensuring public health, the funding for water quality testing at the governmental level is constantly under threat (budgets for these programs in the state of Florida alone have been cut by over 40% in recent years), often inefficient, are full of data gaps to fully inform and protect the public, and rarely collect enough information about where and when individuals are getting sick from contact with polluted water and sewage discharge. In combination with widespread budget cuts, the costs of conducting water quality monitoring programs restricts the ability for the agencies responsible for monitoring beaches to testing at limited number of locations during periods of high use. As a result, the work that is being done to protect the health of the public at these locations by monitoring fecal indicator organisms (FIOs), often on a one day per week/month basis, is highly ineffective given the spatial and temporal fluctuations that occur naturally in coastal marine areas and the results are unlikely to capture high levels of pollution that occur between the government’s sampling. Studies have even shown that at beaches with good water quality and low numbers of indicator bacteria, bathers were still at an increased risk of experiencing gastrointestinal illness, respiratory infections, and eye and ear infections. In addition to that, acquired illnesses are rarely reported as the average time for recreational bathers to the onset of symptoms was six to seven days for gastrointestinal illness, four days for skin illnesses, five to six days for eye-illnesses, and three to four days for ear illnesses according to the Beaches Study.

As a result, local chapters of the Surfrider Foundation have been starting Blue Water Task Force (BWTF) Programs – which are essentially volunteer-run, water testing, education and advocacy programs focused on improving local water quality and alerting the local community about water pollution and discharge events that make it unsafe to surf. Surfrider chapters have been using this program to alert citizens and local officials about water quality problems and work toward solutions.

In places such as Miami, the Surfrider Foundation Miami Chapter became concerned enough about the local water quality to build a lab and to is now testing local beaches weekly by collecting water samples from the local beaches and surfing areas to augment the infrequent testing conducted by the City and the Florida Healthy Beaches Program. Results are then shared with the local community as the main goal of the BWTF is to fill in data gaps, improving the public’s knowledge of the safety of their beach water. BWTF water testing programs, such as the one in Miami, do this by measuring bacteria levels at marine beaches and comparing them to federal and state water quality standards established by the EPA to protect public health in recreational waters.

To prevent getting sick, the EPA recommends that you:
-Avoid swimming near stormwater or other pipes.
-Observe any beach closure, advisory, or safety hazards signs.
-In areas that are not monitored regularly, choose swimming sites in less developed areas with good water circulation, such as beaches at the ocean.
-Avoid swimming or surfing at beaches where you can see discharge pipes or at urban beaches after a heavy rainfall.

Additionally, the Surfrider Foundation, along with a number of county and state health departments, advised the public never to swim or surf within 3 days (72 hours) after a rain. During these periods, the coastal waters are polluted with urban runoff and may also contain sewage from leaking sewer pipes, overflowing sewer manholes, and combined sewer outfalls (CSOs). In most places, especially heavily urbanized areas like Southern California, New York, and Miami, ocean water quality after a rain typically has high concentrations of bacteria and may also have high concentrations of pesticides, herbicides, fertilizers, heavy metals, and petroleum products. Unfortunately, many locations do not post physical notifications or signages after rain and communication about water pollution can be delayed up to a week after it has been identified. The Surfrider Foundation’s website states that the Orange County Health Care Agency has been quoted as saying, “We just assume all surfers know that the water is polluted after it rains.” It’s always a good idea to check with your local Blue Water Task Force (many have automatic water quality alerts that you can sign up for) and/or public health department before heading out into the water.

Note: If you feel you have gotten sick after exposure to polluted ocean water, you can report it at Surfrider’s Ocean Illness Reporting Tool.