The funny thing about paradigm shifts is that they rarely take place in the physical world. They are, instead, a change in the perception of that world, an unblocking of the collective mind, or drawing into the focus of the vision that allows people to see for the first time, with crystal clarity, something that already exists. It is not the world that moves with such shifts, it is the soul that is shaken to its very core.

The last two days at the San Sebastian film festival have shaken me. They have clarified something that I have long suspected but been unable to put to words. I had to see it, on a big screen, and with a theatre full of other witnesses. Now that I have, it seems ridiculous that I wasn’t able to see it before. What I witnessed was the indelible proof that one of the great myths of modern surfing – the supposed performance gap between male and female surfers – is false; there is go gap, perhaps never was. It is we who have been mistaken, who have warped the notion of what constitutes “good surfing” into a series of images designed to look good on t-shirts and magazine spreads. Being wrong never felt so exciting.

It took two films and two women to convince me. The first was Jason Baffa’s jaunt through Italy, Bella Vita, the second was Andrew Kidman’s tribute to Morning of the Earth, Spirit of Akasha. Neither is a “women’s surf film,” but both directors did something unexpected: In the core of their films they slipped in female surfers whose performances prove, in a way that is simultaneously elegant and undeniable, that they can surf with a style and verve as yet unattained by their male counterparts.

Bella Vita is about Chris Del Moro, an impressive presence in his own right, and features a too-short appearance by the Floridian transplant to Australia, Lauren Hill. For those unfamiliar with her, she is a freesurfer who is a scion of that lineage of virtuoso female longboarders that runs directly through Rell Sunn and Cori Schumacher. The trip through Italy sees her surrounded by a smattering of male pros, including Dave Rastovich, Leonardo Fiorvanti, and the brothers Coffin, not to mention more types of short board than you can readily identify. Among the storm of high performance surfing, Hill’s waves linger stubbornly in the mind as a calm eye of perfect poise and composure. What become clear through comparison is an overriding grimness to the way the men attack their waves, which is to say, the way most modern pros surf. It’s stellar surfing – Rasta in particular is always stellar surfing — but the dour cuts of the bottom turn to lip smack, the violence of the fin-blow, the punishing of the open face with the vicious cut back all belie a seriousness of approach that somehow seems ill-suited to those of us who aren’t getting paid to ride waves. It speaks of the incessant drive for magazine covers and video spots as well as the unending arms race to define “high performance.”  It’s radical but often feels short on joie de vivre. Lauren, or the other hand, glides across waist-high wave faces as if she is out on a Friday evening passeggiatta, the tilt of her shoulders and the slight arc of the knee evoking Botticelli’s Birth of Venus. That image flirts with the sexual, but it’s meant more to conjure an image of the divine that somehow captures the ethos of the film far better any number of high performance antics by the boys.

When I asked Baffa about it, he said “I was excited to have the film evolve in a way in which it wasn’t going be a ‘girls’ surf sequence’ or a ‘guys’ surf sequence.’ Instead, it’s just a group of friends having fun together, which I think speaks to the larger themes of the film and larger themes of surfing. To be able to weave her thoughts and experiences into their wider experience as a group gives the audience this broader perspective on the journey those guys had.”

Then there was Gilmore. Her section in Spirit of Akasha is a redux of the Michael Peterson’s famous section from Morning of the Earth. In it, she rides a leashless single fin shaped by Dave Parmenter on the long right peelers of Greenmount. She links board and wave the way a jazz trumpeter improvises over a scale with that nearly magical mix of technical genius and God-given intuition. It’s her first session on the board.

Kidman purposefully follows Gilmore’s scene with one of Mick Fanning riding another single fin. It is also his first session on the board, but the similarities end there. Fanning looks like a man at odds with his vehicle. The board wants to draw a very particular type of line on the wave face but he insists that it draw another. By dint of athleticism, determination and perhaps pure grit, he subjugates the board and forces it into a series of staccato lip smashes. Each is awesome but curiously inert, impressive, but sort of horrible to watch. Fanning looks like cowboy breaking a wild horse.

Gilmore’s section, on the other hand, plays like a single, uninterrupted aria. When it’s done, the viewer is left with a peculiar amnesia. Something singularly enchanting and beautiful has just transpired, but what it was, and especially why it was so fantastic, have no more rational explanation than the feeling of surfing itself. The difficulty of Fanning’s turns is apparent and even commodifiable; the vision of Gilmore swooping across a Greenmount drainer at full trim is, on the other hand, something very close to art. Just like the aura of a painting by Chagall, or a well-danced pas de deux it is a very slippery thing to capture with mere words.

Kidman also drew a dance comparison when I asked him about the scene. “If you think of surfing as some sort of expression, as a dance, or whatever it is, there are certain subtleties that women – just because they are women – have,” he said. “This is just a personal thing, but I don’t think I’ve seen surfing as graceful as Michael Peterson’s, since he did it. I just haven’t seen it. And when I saw Stephanie surfing I had this idea that she could do it, that her grace on a surfboard could get up there with where Michael was.”

When I asked if he thought she had achieved the vision that he started with and he looked mildly insulted. “Fuck yeah.”

If surfing were a pure sport, like boxing or football, it would be possible to say that women will never equal men in performance. But outside of the very niche world of competitive wave riding, much of surfing remains closer to performance art than it does athletic competition. Gilmore would still have trouble besting Fanning in a heat dictated by the judging rules of the WCT, but she is, in my mind, a superior artist in the water any day of the week. There is no gender gap in performance art, and if we apply those standards to wave riding, there is also no gender gap in surfing. We, the male and in some cases, female pundits have spent so much time asking why top women surfers like Gilmore can’t quite surf like Mick Fanning that we have been missing an equally important question: Why can’t Mick Fanning surf like Stephanie Gilmore? 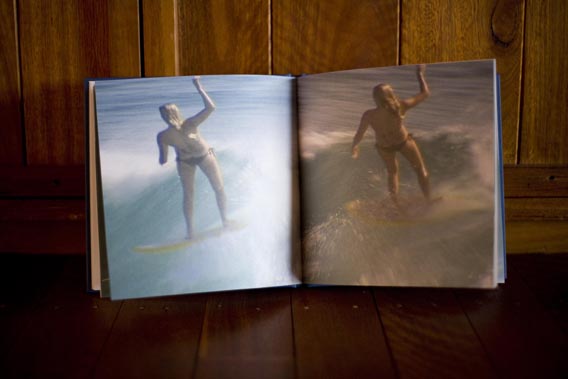