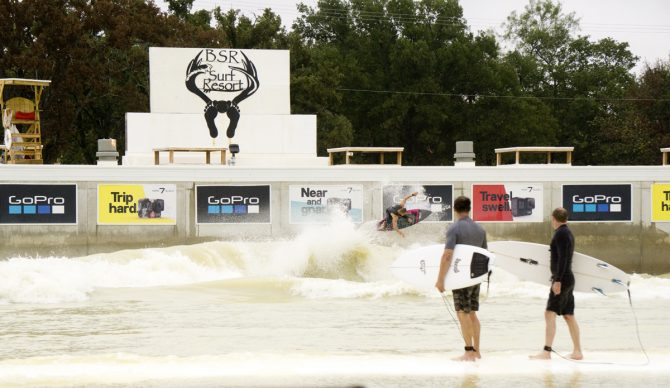 Technically, this is the dream, isn’t it? Photo: Sean Jansen

Like any other surf trip with good waves and good company, spirits rise along with the level of surfing as a session in solitude makes everybody feel like they’ve found paradise. I never expected to have this feeling in central Texas, hundreds of miles from the sea, but with the quick flight barely tickling my bank account, I had to see what all the hype was about. Ten friends, one house, and a 13-hour session with nonstop waves. In chlorine.

The humidity hit much like the powerful offshore spray coming from a Nicaraguan a-frame when I got off the plane. But again, this was Texas and Central American offshores were far, far away. Stepping onto the deck of the pool, where I’d imagine sand would be on a natural coast, the smell of chlorine wafted through the air and the water lay still with a fog dancing on the surface. I scratched my head in confusion of what to do. Do I wax my board? Do I put on sunscreen? Should I trunk it or do I need neoprene?

A churning sound came from behind the concrete wall of the pool and a slow ripple quickly grew into a machine-like wave, no pun intended. We all screamed at the top of our lungs watching that first four-wave set roll through. Boards couldn’t be waxed fast enough and spring suits seemed to take forever to put on while the speakers blasted Metallica to set the mood.

The first hour in and a friend of mine had already clocked 35 rides on his wave-tracking watch. Another friend was surfing for just the third time ever and even he managed to get barreled, thanks to the wave controller who switched setups at our demand — just a simple wave of the arms and voila, the point-like wave was changed into the wedge of our dreams with a simple drop and the easiest entry into a tube you’ve ever seen. Once said-barreled friend realized what he’d just done, he immediately ran out of the water to go slug a quick beer.

Of course, this kind of perfection comes with a price. The wave or waves you request may be perfect for whichever inner grom you wish to unlock, but that doesn’t mean sacrifices aren’t required. The wedge setting sucks all the water off the concrete bottom and heaves it over your head. If you get lipped, you already know exactly where you’re headed. A few butterfly bandages and some super glue later and you’ll paddle straight back out, though. Why wouldn’t you when you cracked open your piggy bank for this experience?

The only hiccup about experiencing this place for the average surfer is its cost. Scoring a day in the pool with just your friends requires a number with four zeros and a comma attached to it. Split with ten buddies and the individual cost moves that comma over, but it’s still there. But think about it for a second. Say you booked a trip to Nicaragua, for example, from California. The flight, the rental car, and a place to stay right on the water adds up just as quick and you’re still left needing to pray for swell and offshore winds. Even then, you can’t pray (or pay) the crowds away. Here in Waco, Texas, however, the only sets to fight for were among friends. The experience is exhausting and everyone in our group went in at several points throughout the day to get water and re-fuel.

Surfing, as we all know and learn, is a selfish sport. When that set comes marching through at your local or even at your dream destination on the other side of the globe, you want it for yourself. Sure, you want your buddies to get theirs too but only if you get yours. If you say otherwise, you’re lying.

The beauty here is that there’s actually enough to go around. Yes, you will have to break the bank for an all-day shred with friends, but it’s worth it. My friend who’d tracked 35 waves on his watch in the first hour lost that same watch in the pool, never to be found again. What do you think his wave count was in that 10-hour day — each and every one offered at his request and without the hassle of a crowded lineup? It’s certainly enough to satiate our regular selfish appetite.

So I beg of all surfers out there to try for themselves, for it will remind you of the inner grom that lies within, whether you’re already the most surf-stoked human on the planet or in need of some laughter and fun with friends. Ten months ago I followed a path in life that took me away from the ocean. My trip to Waco was my first surf since, and I felt everything rush back to me from my days growing up in San Clemente. My stoke returned, all thanks to a bit of chlorine in the middle of Texas.