Why I Love Talking About Surfing 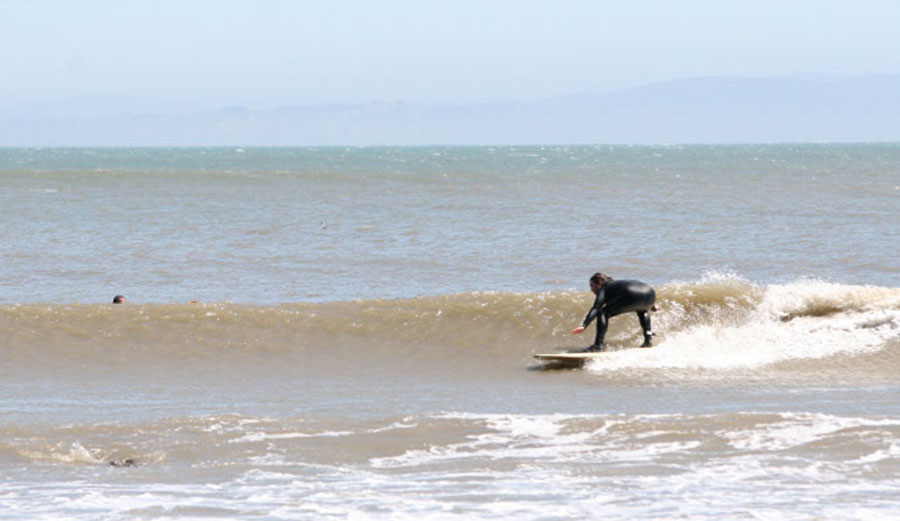 “Dude, I just got so barreled!” he giddily proclaimed as he paddled back to his buddy waiting at the top of the point. It was a mushy, knee-to-thigh-high day and the tide was really starting to swamp things out. His buddy sulked his shoulders in shame and offered up an obligatory, hushed scolding, “Uh, no you didn’t, ’cause it’s not doing that, Ralph.” He shook his head in disgust and looked at the rest of us bobbing on our boards at the all too typically uncrowded Southern California point break, apologetically as if to say: “Look at this fucking kook twat, claiming sack of shit who I am mortified to call my friend. Am I right?”

Yeah, Ralph’s “friend”, you are right for giving into the popular mentality that one should just surf, shut the fuck up about it, and wherever possible, shit on anyone else’s good time! What a guy, helping to teach your less proficient friend how to behave as a surfer, keeping him honest, silent, and sad. And maybe it wasn’t barreling in reality that day (it for sure wasn’t), but to Ralph it was. While stink bugging down the line at approximately 3mph, he had gotten his head wet and he thought he had just had the ultimate experience of being balls deep in a hollow wave. Like a middle schooler’s first over-the-pants hand job, he rushed straight back out to his buddy to claim he’d just rounded all the bases. And just like in middle school, his best buddy was a dream crushing little dick head keeping Ralph’s enthusiasm in check.

You wanna be excited about surfing and talk about it? You wanna share your perceived experience with others? Who the fuck do you think you are? SHUT UP! This seems to be the consensus among humans who ride on environmentally catastrophic materials in the sea while sliding down, across, within, atop of, underneath, betwixt, among, and on temporary water hills. Fuck that I say.

Unlike fishermen, surfers are supposed to downplay everything, curb their enthusiasm, and belittle their own accomplishments. Because it’s cool. Acting all Robert Downey Jaded to the point that people can’t even acknowledge someone asking them how their session was is just so fucking cool. And isn’t that the whole point of surfing? To be cool? How dare we admit to having a good time, to feeling joy? Spewing unchecked excitement into the universe over mediocre waves is perceived to signify that we suck horribly at surfing, and that we are content with a mediocre life. On the other hand, if we shut up, frown, and act like we’re having a damned horrible time, everyone knows we’re a true ripper; that we’ve seen better, and the best peaks will always find their way to us.

But this overlooks the fact that when we speak something, utter it into the ether, we start to believe it. Even if it starts as a lie, it can quickly become truth, to us. What we believe becomes our reality. Just like when Ralph got barreled. Just like what the incredibly aware, bright, compassionate, in-touch, inclusive, selfless Republican party has done with the facts of recent history. It doesn’t matter that it was president George W. who deregulated wall street, slashed taxes for the wealthy, made it rain on the country’s tab in two wars, and shafted homeowners while stroking banks’ shafts. To the GOP, the economic collapse, and every other problem in their lives–including their inability to hold any kind of a meaningful erection–is all the bodysurfing black guy’s fault. Because they’ve said so, that is now their reality. So tell your boys it was 8-10 feet and offshore, even if it was chest high and closed out. Soon you’ll remember it that way too! Embrace your inner fisherman.

In surfing, as in life, there are talkers and there are doers. And in surfing, as in life, it is the talkers who have all the answers and move the ball forward. Talkers are the positive, optimistic change makers. They are the dreamers. They spend their time and energy blowing hot winds of progress, uttering big plans and edited memories out into the void. Talkers are bright eyed and bushy tailed middle schoolers with blue balls. If you ask a talker how it was out there, they’ll say “epic” nearly every time. The world needs talkers.

Then there’s the doers. The realists. The pessimistic buzz kills. The cock blockers. The Hawaiian-scale observing tough guys. Never saying a peep as they rip the waves to shreds violently and with emotional anguish, tears rolling down their cheeks mid air reverse. They are cold, closed, and calculatedly aloof. If you ask a doer how it was out there, they’ll shoot you a glare or downplay it with a little afflicted shrug and whimper, because it was always better yesterday for a doer, so they can’t enjoy the blessings of today. Because they’re so adept at surfing, doers are tapped in to all the suffering in the world. When a doer’s session is over, they’ll likely go back to crying and cutting. Self flagellating any time they accidentally let slip any kind of proclamation of joy when doing anything that they love because they want the universe to keep courting them. They’d have you create space for cancer in your life by negating any joy for the sake of cool.

Fuck that. Not only will talking about surfing allow you to shape your reality, rewrite your memories, rip when you actually suck, and avoid cancer, but talking about surfing helps recruit more people to the dying sport. And let’s face it, this is much needed. It’s so lonely out there, especially in SoCal. Practically no one surfs anymore. It would be nice to occasionally surf among our fellow man, and share the plentiful, consistent waves with other humans. For my money, there’s nothing more pure and relaxing than when there are forty nine chatty Cathys paddling for the same wave. But if everyone keeps their traps shut and just surfs, this sense of community might soon be a thing of the past, a memory we have to create for ourselves. Because of the sad, silent machismo, our beloved obsession is hurting, and will likely soon vanish into obscurity. That’s why I spend all my free time talking about surfing to actively recruit new surfers. We must be proactive with our outreach. We need to let everyone know how fun it is. Let’s keep surfing alive, people!

Note: It’s very fun, sometimes even essential, to have a sense of humor. Read more things I love here.