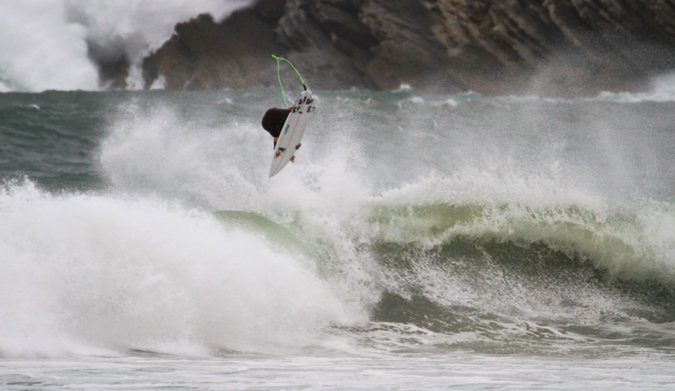 Since Kelly did that monumental air, I’ve followed the coverage on the usual channels and I’m amazed that everybody calls it incorrectly. Many with such certainty, but I don’t know where that comes from. The debate now is whether the last 180 degrees after he lands and turns his board around in the water are part of the air or not. That would be the difference between 540 or 720. Well, it is not. If that would be the case, then this would be a 900.

The real issue lies deeper and goes back way further. And it’s not about the last 180 degrees. It’s about the first. Bear with me.

There have been debates and a race for the first 720 over the last few years, but Kelly just did it, yet no one recognized this. It’s done! The race is over. Kelly Slater landed the first legit 720 in surfing history ever! Its f*#%ing incredible!

So what happened? Everybody called it a 540 and Kelly received praise everywhere. Rightly so, but at the same time he is being discredited. That’s a shame.

I think the reason for it is this: surfers themselves, the commentators and the surf media, have been struggling with naming and understanding tricks for a long time. As a result, some incorrect fundamentals have been established. Especially one: the air reverse. The name stuck and the trick has been performed a gazillion times by every pro and grommet on the planet. It became the staple term for any sort of frontside rotation instead of calling it what it is: a 360 reverse. Whenever a surfer lands backwards (fakie, in skate and snowboard terms), it will end in a reverse since his fins will eventually catch and turn the board around. The reverse is an addendum to the trick name, but it is not included into the degree number of the rotation. This makes Kelly’s air a 720 reverse.

Or have a look at this clip (1:05 mark) and check out the very first two airs:

The first is a classic air reverse, and the second is a frontside 540. How are these called the same? Chippa clearly lands backwards and reverses and John John lands forward and rides out of it. John John, landing forward, clearly did another 180 degrees of rotating while airborne. The third air is a backside 540, by the way. A really nice one too.

My main point is this: why does the surf world not adapt the well-established facts of the skate and snowboard world? This, I believe, would be beneficial. It makes calling tricks easy and establishes mutual respect for our combined heritage. From my point of view, when it comes to naming tricks, a wave has to be understood as a half of a halfpipe (or a mini-ramp when it’s 3 foot), i.e. a quarter ramp.

In vert skating and halfpipe snowboarding, a straight air is by nature a 180. You take off forward, you fly a curve, and you land forward. Any additional rotation added to a straight air is 180 degrees plus that addition. This is most true for vert skateboarding as you go straight up and down. A little less true in snow and even more so for surf, due to slightly angled take offs and landings (a lot of variation here due to the nature of waves). But these slightly lessened angles should not be reason enough to have the air account for 0 degrees nor should it change the fundamental naming principles for that matter. Snowboarders never thought twice about adapting skate terms. Yet surfers do and it creates endless debate and confusion, making us the laughing stock of skaters and snowboarders.

Of course, my viewpoint could be up for debate and apparently Kelly had been in touch with Todd Richards and Tony Hawk right after it, and they should know better than anybody. Kelly’s “it’s an 810” statement, which I believe was meant as a joke to stir up more debate, might be closer to the truth than anyone thinks. Todd and Tony might have been arguing for the 720 rather than the 540. We can only speculate.

But does it make more sense to see a wave as a straight jump ramp, a kicker rather than a quarter ramp? Heck no!

Skateboarding was born from surfing. Skaters created a lot of tricks. Snowboarding was born by skaters and surfers who wanted to take the board to the snow. Then snowboarding adopted all the trick names from skateboarding and evolved quickly. The snowboarders soon surpassed the skaters when it came to spinning because it is easier on a snowboard. This, in turn, influenced skateboarding again (think mega ramp), and both influenced aerial surfing where it is without question the most difficult to do.

I’ve watched, amused, the confusion over naming airs for many years. Snowboarders had some things wrong, but man, surfers have been by far the most clueless in that regard.

I admit I am not an authority on this, but I feel strongly about it because I care about history – the intertwined history of the three crown jewels of board sports. And I care about the mutual respect between them. I came late to surfing as I grew up a landlocked German who spent his teenage years vert skating in the ’80s. My life’s passion became snowboarding and I did quite a bit of halfpipe competition throughout the ’90s. Now I surf and, like us all, I’ve witnessed the progression of tricks.

“In October 2014, Robert Kelly Slater pulled off the first frontside 720 aerial in surfing during a contest lay day in Portugal. Not to mention that he was 42 when he did it.”

Is that too much to ask?