Why Watching a Wipeout Is Infinitely Better Than Watching Good Surfing 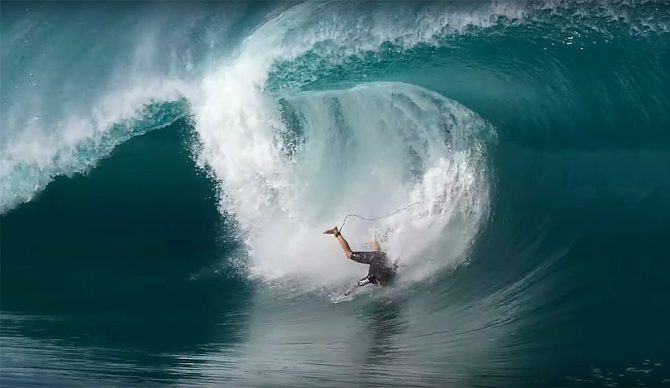 Teahupo’o has a way of proving the author’s point. Photo: YouTube

Success in surfing is finite. There are only so many ways you can rotate the human body on, or above, a wave. I hate to be the Bearer of Bad Yews(!) here, but surfing today is about as progressive as it’s going to get. From here on out, it’s all the same maneuvers with more rotations or various types of embellishment (e.g. it’s an air reverse, but this time they grabbed a new part of the board! SO REVOLUTIONARY). All the tricks have already been discovered. I’m sure someone will eventually come along and rotate another 180 degrees more than the last person, but it’s still the same aerial and mechanics. It will only be “new” in the sense that they’ll spin in circles slightly more than the last wave-riding, circle-spinning record holder.

To watch a wave surfed to its fullest, with the surfer properly hitting all their targets, throwing spray and acrobatic aerials along the way, is a sight to behold. And while I do appreciate a well-surfed wave, it’s also incredibly boring. Perfection’s luster wears off by wave number four because the surfer is doing everything correctly, performing the exact maneuver that a particular walled section calls for. It becomes too predictable. It’s like any Pitbull song – you might not know exactly what’s coming next, but you also know exactly what’s coming next (and there’s a high probability it’s in Spanish).

But there are infinite ways to fail. We are nowhere near the bottom of discovering all the cringe-inducing ways surfers can fall headfirst into the sea. And now that foam boards have created a surfing ecosystem where there are far more floppy, lost guppies than there are competent wave hunting sharks, the probability of creating new, innovative ways to fall off a surfboard has grown exponentially. We are living through the Industrial Revolution of The Wipeout. What a time to be alive.

I prefer watching a surfer crash and burn on a wave because of the unpredictable nature of their collapse. Wipeouts are chaos with no known outcome. Throwing accident-prone human beings into nature’s harsh saltwater mixer and forcing them to react to surprises on the fly is the best-unscripted reality show you can watch. The combination of easily lost balance, lying hips, and an aquatic freight train roaring behind you that loves nothing more than throwing the filthiest of curveballs combine to serve up a variety of entertaining physical mishaps.

And there is catharsis in this carnage. I am comforted by the fact that the surfer currently getting pummeled is most definitely not me. Every surfer has some degree of post-traumatic stress disorder from getting obliterated by a wave and immediately knows the feeling of uncontrollably flying through the air to a salty punishment due to their own gross miscalculation (those that do not suffer from PTSD go on to become unhinged psychopaths, colloquially referred to as “pro surfers”). It’s a relief to see someone else getting their nasal cavities rearranged for a change.

Wipeouts are also much more relatable to the everyday surfer. I’m an average adult that knows life loves nothing more than to ambush you at every turn – trap doors, bad foot placement, spike and/or snake-lined pits, and other adults who do not know which direction to turn. It’s not all sunshine, unicorns, blown tails, and flawless aerials. Wipeouts are real talk – it’s the entire human experience playing out in front of you: a brief moment of success, followed by some sort of bad luck or self-sabotage that brings a short-lived victory crumbling literally and figuratively back to Earth.

Perhaps you think I am a sadistic, cynical asshole for enjoying the failure of others more than watching them thrive. I’m not going to disagree with you – but I am well aware of what party I have been invited to in life, and it is not the one with fancy hors d’oeuvres and a waitstaff that knows exactly when you need another glass of chilled champagne. Wipeouts aren’t mundane perfection served on an elegant platter; they are good, rowdy fun that everyone can easily enjoy. Que no pare la fiesta de wipeouts – don’t stop the wipeout party.