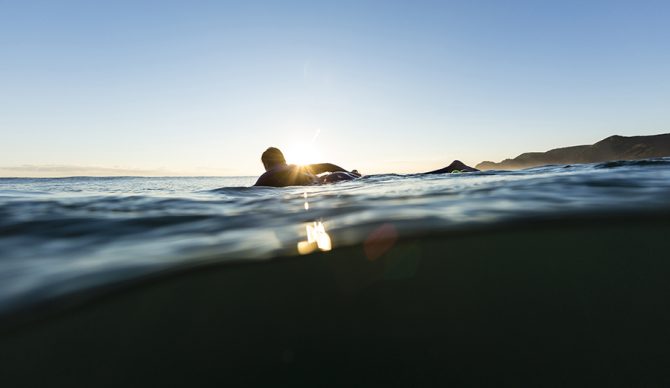 The notion had been impressed upon my sister and me from a very early age. However, it wasn’t until my first daughter was born that I fully understood the reality of what my parents had been preaching: empowerment, education, and enduring hardships.

They taught that hard work, respect, and goals were not just nice catch phrases. They were tangible objectives my sister and I were expected to uphold. But like every other young ocean-minded boy I thought of nothing other than dropping out, buying a van, and bumming around the country’s best surf spots. That lifestyle seemed so easy. No responsibility. Moving freely without anyone to tell me no. A slave to none, I thought. Luckily, my parents strongly encouraged me to consider college or trade school before embarking on the vagabond journey. I was a really good ice hockey player and was recruited to a school in the middle of New Hampshire, so yeah, I wasn’t exactly headed to the Mecca of surfing (although if you have never been to Hampton Beach, please go and stop by Cinnamon Rainbows Surf Shop while you’re there.) Reluctantly, I obliged my parents and continued my schooling through two separate degrees and countless fantastic experiences. All the while I was meeting friends from all over the country and some from far around the world. Admittedly, the feeling of dropping it all and going off the grid never left my mind. It’s a feeling shared by every surfer. You’re thinking the same thing right now, aren’t you? It seems so easy. The good life. But it isn’t, not in my opinion.

My ah-ha moment came during the first cold snap of our New Jersey winter, exactly five months and 20 days after my first daughter was born. It was 3 a.m. and I was driving home from an extremely busy night shift in the ER. Multiple people clinging to life. Several helicopter transfers. My skills used to exhaustion. It was then that I no longer wanted that poor, roaming lifestyle.

You see, those degrees I mentioned above were in Biology and Nursing. Skilled trades. Marketable. The kind of degrees that have my phone ringing with job offers at least three times per week. I am an Emergency Department Registered Nurse and I love every minute of it. But let me confess to two things:

1. I had to work REALLY HARD to earn my degree. A lot of time was spent in the library, parties were missed. I used this sentence more than I care to remember: “I wish I could, but I have to go study.”

2. For the first seven years, I continued to struggle with the thought of leaving it all and pursuing the surfing life I had always dreamed about.

But as I drove home that night knowing I had made a difference in the outcome of human life, I decided that life of chasing waves wasn’t the one I wanted anymore.

So what am I suggesting? While it may seem sexy and glamorous to become a professional surfer or renegade van-lifer I would encourage you to think bigger. Not just college degrees or skilled trades. Rather, consider fostering learning, becoming educated, opening your own business, or creating the next big thing. Dream of changing the world. Trust me, knowledge really is power. Don’t get me wrong, striving to become a professional surfer is a grand and worthy pursuit, it just shouldn’t be your one and only. Remember the old saying, “don’t put all your eggs in one basket”? Apply that here.

I’m sure by now you’re probably ready to call me an Uncle Tom and a Buzz Killington but hear me out on this. Full-time hours for a nurse are three days a week. I get to meet tons of cool people. At least once a day I save someone’s life (like actually save their life. Seriously, they would be dead otherwise). My knowledge allows me to earn more money than I could ever have imagined as a poor student. I have a beautiful wife, a nice house, and a car that doesn’t break down every other day. And best of all, every year we travel to at least one cool place while getting paid from my job. Yes, it’s hard work. I don’t have the freedom to just drive to the next place and stay as long as I want. But then again, I’d rather fly to a far away surf destination than be broke and “free.”

Truthfully, I would have never believed these proclamations would come out of my mouth. Maybe it’s the father in me bubbling to the surface. Or maybe the things I’ve seen in the emergency department are shining a new light on life’s priorities. Either way, the preconceived notion of the bro’d out surfer needs some updating. We should take pride in the fact that most of us work for a living. Stand tall in the notion that we are productive members of society. Grounded. Family-oriented. Respected and respectful. The kind of people our kids would be proud to tell their friends about. Are we going to miss some swells due to work? Sure. But doesn’t that surf trip to Costa Rica make up for it? Or how about that long weekend to the OBX for the last hurricane swell?

Let’s empower our youth to be the leaders of tomorrow. And it all starts with being quality examples.