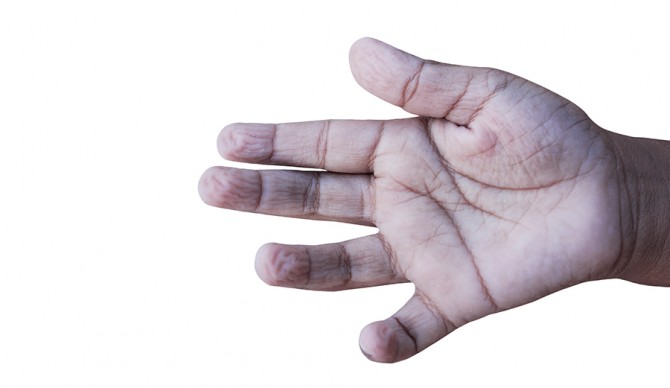 It’s just a matter of time before the wrinkles set in after a good surf. While it would be cool to surf past the century mark, wrinkling up like a sun-faded senior is definitely not. Pruned hands aren’t exactly good to look at, but believe it or not, wrinkles are actually a good thing for surfing. Here’s why your hands wrinkle up in the water, what it means and how to handle it.

Jump in the water, paddle out and boom, 30 minutes later your hands and even your feet have wrinkled crevices in them like a shriveled up vegetable. There’s a couple convincing theories out there as to what causes this and why.

The most common theory is that the outer layer of our skin is soaking up water. The idea is that the skin has to create more surface area to hold the water so it wrinkles up. If this were the case though, our whole body would wrinkle up and that’s just not a good look. It’s safe to say that Baywatch would not have been nearly as successful if Pamela Anderson and “The Hoff” came running out of the water covered in full body wrinkles.

On top of that, if soaking up water were really the cause then fingertips would get bigger. However with wrinkling, the total skin volume actually goes down. It is true that some water is absorbed through osmosis but it isn’t the root cause of wrinkles

So here’s why your hands really get pruned. As a tiny bit of water soaks into the fingertips it fires up the autonomic nervous system. This involuntary nervous system that does things like breathing also activates the nerves in our fingertips when they’re wet. This causes the blood vessels to constrict and pull the skin in tight forming wrinkles.  We know this is the cause because researchers found that people who have lost nerve function in their fingertips don’t actually get wrinkles.

At first it might seem bizarre that the body reacts to water this way. As it turns out, it’s a good thing for us surfers. Scientists believe that the hands and feet wrinkling up are an adaptation to being in the water. The wrinkles work like tire treads draining water away from our fingertips.

This has been shown to help our grip while working with wet objects. A study compared people picking up wet marbles with wrinkled versus non-wrinkled hands. They found that the wrinkles helped with picking up wet objects but not with dry ones.

Now how do you reverse the wrinkles? Assume you don’t care about your superhuman grip in the water and you don’t want those wrinkles.While you’re in the water there’s nothing much to be done other than cutting the nerve to your fingers (Bad idea). In theory there is another solution. If you really wanted to stop the wrinkles you could get Botox in them. Who knows? Maybe the Kardashians will hire you as a hand model after that.

Really the best solution is just to quickly dry off your hands post session for a quicker return to normal.