With Rumored Athlete Vote Coming, We Asked CT Surfers If They Think the Surf Ranch Stays on Tour 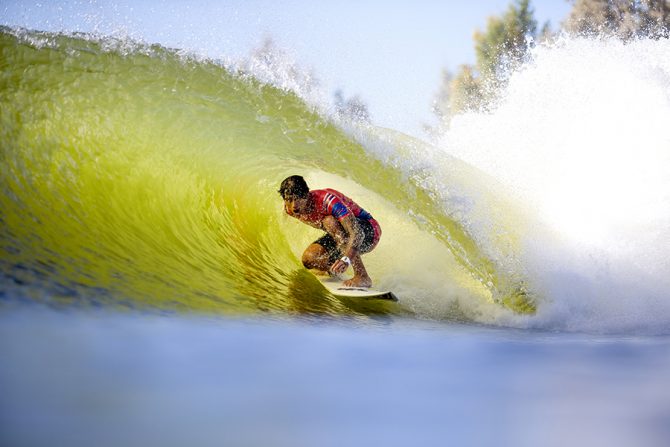 Zeke Lau, 100 percent in the barrel, a solid 70 percent that the Surf Ranch is on tour next year. Photo: Morris/WSL

There’s a lot going on at the Ranch. There’s the contest, of course, where competitors in the 2019 Freshwater Pro have seemingly figured out that surfing safer means safer results. Then there’s the surf industry types and fans, huddling near the bar after the long drive to California’s Central Valley east of Fresno, where surfing seems about as out of place as an actual beach here in the state’s agricultural hub. But here we are, with the best damn view we’re probably ever going to get for a contest. Up close and personal, with a chance to get inside the heads of the world’s best. The hottest topic, it seems, is whether or not the Freshwater Pro will return for the 2020 Tour. With a rumored athlete vote coming (note that I haven’t confirmed that the vote is actually happening with WSL officials, I was told that by a curious CT surfer, see below), it’s rather good fun to ponder the possibilities with the players themselves. Change in scheduling is standard with any league. So out of pure curiosity, I informally polled several high-profile CT surfers (and one commentator) on whether they thought the Surf Ranch would be back next year. Using percentages – zero being no chance, 100 obviously meaning it’s back – here’s what I dug up in Lemoore.

I heard they’re going to take a vote after the event to see who still wants the event on. It is what it is. For me, I like it, but at the same time it’s a really hard event to prepare for. So a solid 70 percent that it’s on next year. You know when you get here what’s going to happen. Ocean conditions change, sometimes there’s wind, sometimes no wind. But at 5:32 p.m., I’m going to be in the water catching my wave. They weed out a lot of the unknowns that go into a surf contest: not knowing when waves are going to be good, not knowing when you’re going to surf. Things like that make it easier on you. But it’s tough to prepare for mentally. This is the only day I touched my surfboard. I’ve been watching Netflix. I blasted through three shows. I love Netflix but I’d rather be surfing somewhere. 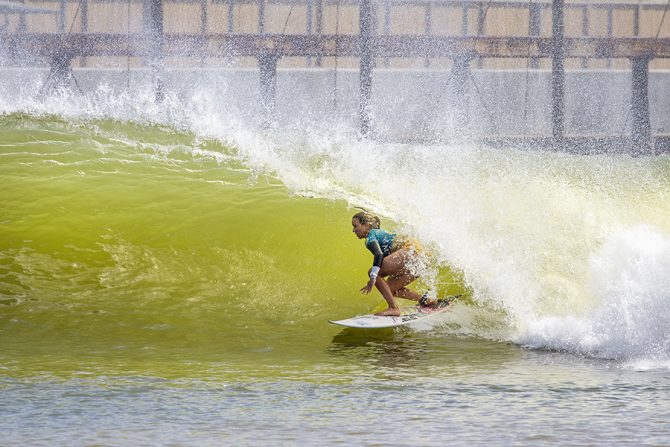 One-hundred percent. I’m thinking there’s going to be two. I’m going big. I reckon they’re going to build a new one in Texas. We’re always going to be the hybrid generation. We’re ocean-blooded creatures so freshwater is never going to feel natural in our careers but I’m just excited that I have a lot of room to improve and go and train in these pools. Then the next generation is gonna be doing crazy flips and I want to be around to see it all. When you can come back to an event like this, everyone is improving at the same rate so it’s really fun to see. If you can keep your imagination going, it’s so possible to come back and be better in these things and that’s what I really love about it. 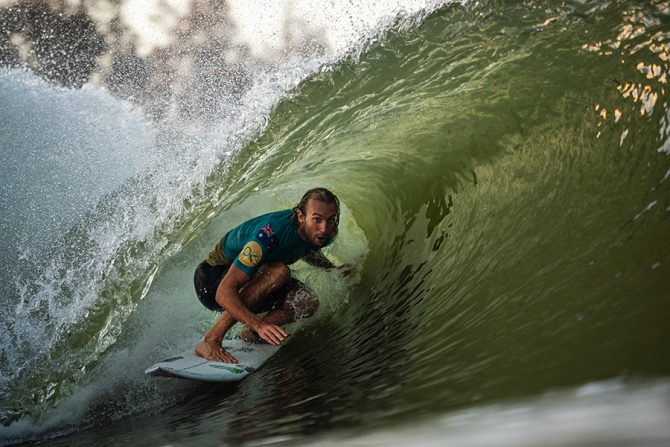 One-hundred percent, I hope so. I loved it last year. I love it this year. My only thing with this, I want to see another one. We only get one shot at surfing like this. Just so the judges see it again and we get to surf it again. We know what to do, the surfing gets better, the viewers are like, ‘oh, great, these guys know what they’re doing a bit more.’  We only get one taste at it but it’s really a fun way to compete. So give us one more. 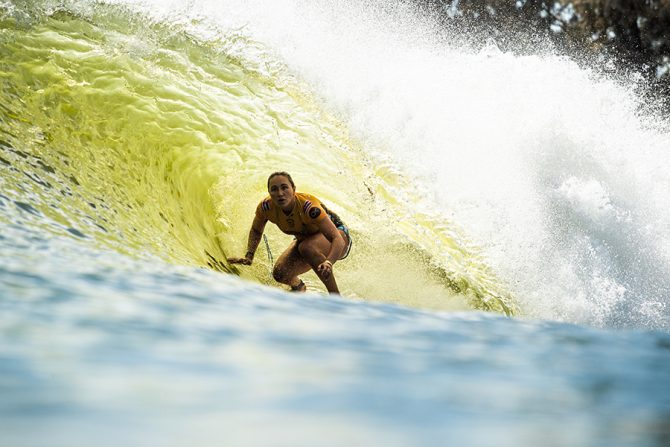 I don’t know. It’s been on the last two years so right now I’m guessing 100 percent. It’s working. It’s definitely different. I think everything is flowing really well. It being the second time around, everyone knows when to be on the dock, everyone knows their time slots. It’s a totally different thing and it’s never going to take the place of the ocean but it’s a fun way to challenge us in a different way. 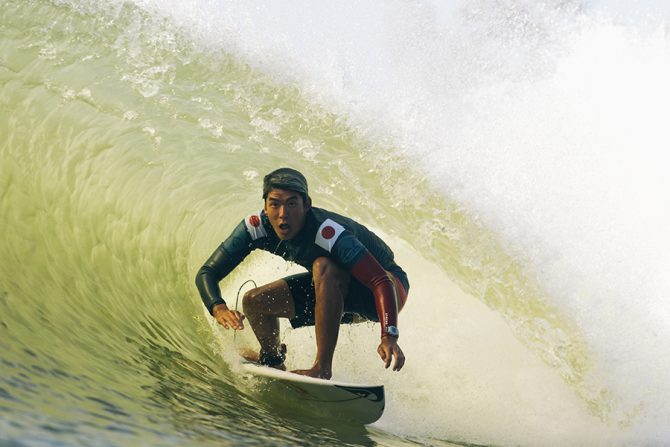 Kanoa seems to be of the mindset that professional surfers just need to step up and deal. Photo: VanKirk/WSL

Ninety percent. Nothing’s for sure until it’s in ink. But I don’t see why not. It’s a tricky event but you just got to get used to it. Everyone gets the same opportunity. It’s about who clutches up and who steps up. You just have to be ready for that.

I’d be way down the list of people who would know but would it be a cop-out if I would say 50 percent? Because if we have a crazy ending (to this event), why wouldn’t they put it back on tour. As of now, it’s hovering around 50 percent. I’m a huge fan but at the same time I do like venue changes. I do a lot of skate events and it’s cool because they switch things up – they build new parks, they go to new parks, new cities, new destinations, so I always get excited to see things switch up, you know, go back to Lowers, go back to Fiji or add something new and that goes for a lot of stops on Tour. 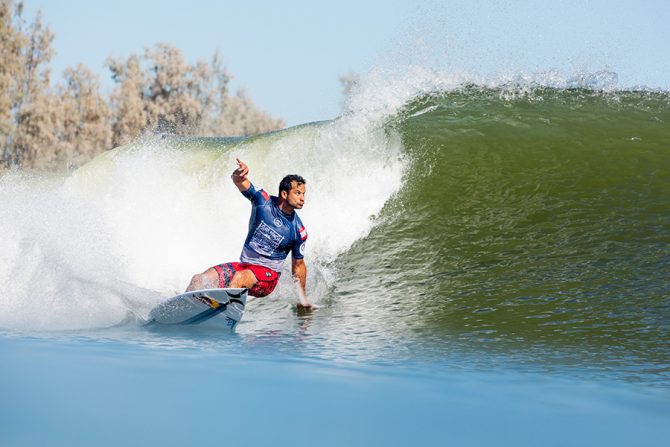 Bourez is of the same mindset as many fans online: that surfing belongs in the ocean. Photo: Miers/WSL

Zero percent. In my opinion, I never felt like we should be here as CT surfers. We could be here for a demonstration event like we had before. Maybe for the Olympics, it would have been great, easy to set up for the public and media. But to me, no, we need to be in the ocean. As a surfer, what you do your whole life is learn from the ocean – where the currents go, which wave in the sets is the best one, left, right, then you get here and the only thing you need to focus on is the wave. Sometimes the wind is a factor, I guess. At the end of the day the wave that comes to you, you have to think of it as your last one, you can’t blow it. There’s a lot of pressure, especially when they tell you there are 30 seconds and you can hear the train coming. It is what it is, it’s the same for everyone, there are people that can handle it better than others.

Watch the event live at WorldSurfLeague.com.