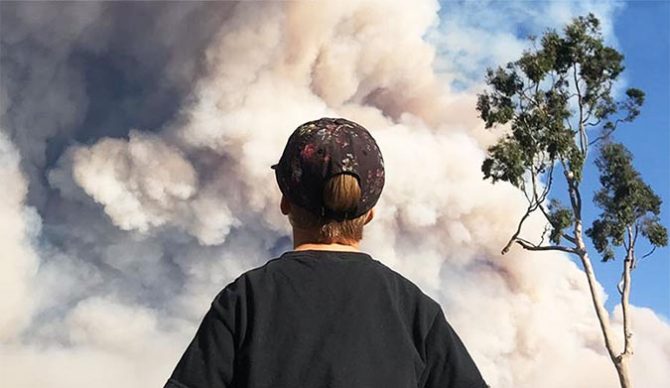 One of Strider Wasilewski’s sons looks on at the devastation. Photo: @stridersworld

I was home, going through my normal day, dropping the kids off at school – all the kind of regular domestic dad duties – and keeping an eye on the Woolsey Fire. It was a bit of a tough time: my best friend’s dad had just died of natural causes that week and I’d helped carry his body out of his house a couple of days before the fire.

That next day, though, the fire just looked aggressive. The winds were northeast but they blow kind of up the coast from where we are, geographically, at Point Dume. I wasn’t that worried. I wasn’t going anywhere.

There was a mandatory evac but we were far enough away. I could see the fire on the ridge across from where I was in Malibu Park and it all seemed like it was doing what it was forecasted to do. We were hanging tight and I actually went down to the beach with the whole family. But there was this big, huge cloud that came across the sky and kept getting closer. I just thought it was northeast winds blowing it out to sea.

But then the winds switched and started blowing more towards the north and northwest. That’s when I realized things were going to get really bad. I went back to the house with my wife and kids and started soaking the property down with hoses to hopefully make a difference and do what I could. I looked at the ridgeline across PCH and the flames were way too close with the wind direction. I felt like I was putting my family in a vulnerable position so I made the call to get out of there.

We tried to go north because south was bumper to bumper, the traffic was so bad. So we went north after getting my mother-in-law out of the house (and in the car with us). As we were driving, the flames were 50 feet high on both sides of PCH. I could feel the heat through the walls and car windows. I seriously thought the tires would pop and the windows would burst.

I had my whole family with me in two cars. My wife was behind me, and it was myself with my two sons in front. I couldn’t see and it was absolutely frightening. There were literally flames moving and slithering across the road under the car. So I made the quick decision to change directions and go back down the other way. I’m so glad we did that. I’ve never seen anything like it: the smoke clouds in the sky, the way it was ripping down through the canyons, the way the winds changed, it was just pure devastation.

7:45 am this morning… Being a Dad and having 3 boys you get suspicious when things go quiet! Thanks @lilyllh for pushing on the library idea… 😍👌

A post shared by Strider Rasberry Wasilewski (@stridersworld) on Nov 6, 2017 at 8:23am PST

On the way back south, there were flames coming off the ridge that crossed PCH at the Native Hotel, burning the neighborhood to the northwest. There were 50-foot flames in the trees. That was the point I looked in the rearview mirror and caught my wife’s face and I knew she saw it, too. It wasn’t looking good for our home. As we drove by, fire was ripping down the ravine toward my house. There were no firemen, nothing there. It felt like we were out there alone on an island. There were so many different points where fire was hitting different places, it really surprised everybody. I decided not to stop. I didn’t want to put my family in danger so we kept driving, knowing my house was going to burn. I didn’t want to sit and watch it burn and have my family in danger.

We got to the fire station and there was personnel but no fire trucks. I talked to them and apparently, they’d asked for 70 fire drops and only got seven. It’s an unfortunate thing. They can only be at so many places.

I kept going over it in my mind, ‘Should I have stayed?’ I tried to fight it with the hoses. But I was by myself and 50-foot flames were coming toward us. It wasn’t my idea of a good situation or even worth risking my life. I’d rather my house burn down than to not be around for my family. I thought it was just our lower guest house, we called it the barn, but everybody started sending me pictures. My house was on the news. I had people sending me text messages of the house burning. It was pretty shitty. 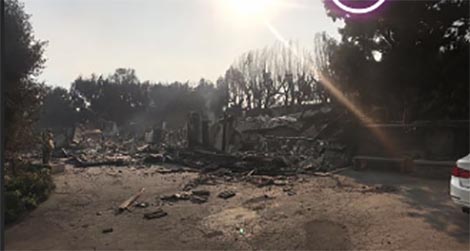 I had to find a place for my family and the only place that had any rooms was the Beverly Hills Hotel. They ended up being amazing, taking care of my family, making us feel super comfortable. They gave my kids skateboards. You just don’t expect that. It’s been so amazing to have that community support. The next morning I woke up and the WSL called – they were amazing and supportive. They kind of just took care of us, told us whatever we needed or whatever we wanted to do they’d support it. They opened up their house in Hawaii for us to come early (before Pipe). So my whole family and I are over here now.

Before we left, I had to go back up and get something for my mother and father-in-law. I went to Kanan Dume Road down a back road and blew by the second check-point on Mulholland. The officers were waving us back but I had to get down to see our home and what was left. There wasn’t anything. Both properties burned to the ground. I walked around with my wife and took it all in. I guess it kind of settled me, even though we’re up against having to completely re-build. I went around and saw a lot of friends’ homes that had burned down. That was even more devastating. It was almost hard to even grieve with how much destruction there was. It really hurt my heart.

Then we just kind of turned the water off on our property. The water pipes had broken open, and there was nothing else to do, nothing to save. Inside the house, one room was still sort of standing, the library, where we had these old church windows that were stained glass. They were still there, oddly. The one place in our home where everything was always calm was the library. That’s where those windows were. The firemen went in there and unscrewed them for us and left them. We’ll find someplace for those when we rebuild.

Malibu will be back better than it was. The community is stronger than it’s ever been. It was a devastating thing, but once the ashes settle, the hills will regrow again, you’ll see the green come back. It takes a little bit of time, a couple of years, but it’ll be back to 100 percent. The regrowth will be beautiful, the new homes will be amazing. People will keep their heads up thinking about the future, even though getting there is going to be tough. I think it’s an amazing community of people. The love and support, I don’t know how many thousands of people I’ve never met were wishing us well on Instagram and social media. The love in our world is pretty intense. That’s what holds you up.