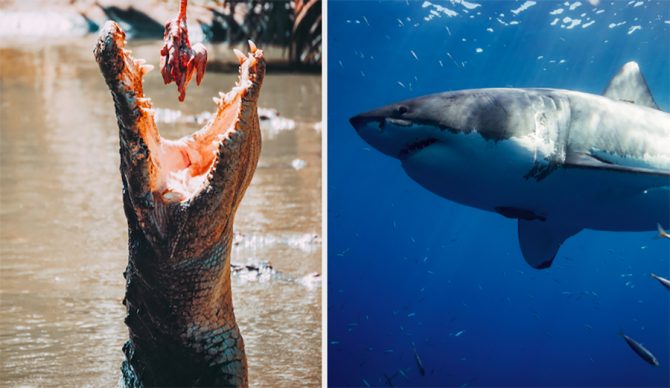 A lone fin breached the surface of the water about 20 feet away from me. Angular and fast-moving, it was the unmistakable sight of a shark in pursuit. The fin disappeared, making me think my mind was playing tricks on me in the early morning hours, before popping up again slightly farther away.

I was a thousand percent sure it was a shark. Definitely a juvenile, but a shark all the same.

Riding one wave and calling it quits was the complete opposite of how I planned to spend my morning. I put a lot of effort into waking up and dragging myself down to the beach, so this teenage predator was becoming much more nuisance than threat. So, I did what any sane person would do – lifted my feet out of the water and kept surfing.

To recap: I stared directly at a shark’s most famous feature and thought to myself this is fine. In case you’re wondering if surfing causes brain damage, the answer is a resounding yes.

Now, swap that shark fin out for a pair of crocodile eyes and I would be sprinting back to shore as fast as my hyperventilating lungs would allow. I am terrified of sharks, but crocs inspire an entirely different level of fear in me. Captain Hook’s nemesis could be chilling a few miles away from me on a rock somewhere with a flock of seagulls perched calmly on its back and that would be enough for me to begin convincing my wife it’s time to move to a new neighborhood. Sharks I can live with – but I cannot share an area code with something that looks like it came out of Jurassic-era Australia.

And yet, many surfers shrug off thoughts of meeting their demise via croc chomp. Crocodile-rich Costa Rica sees loads of surfing tourism despite numerous reported croc attacks over recent years. I began to wonder if my fear of this dangerous reptile was really worthy of being elevated above the ocean’s foremost apex predator or just another figment of my anxiety-riddled mind. So, I took it to the extreme and thought – what would be the preferable scenario? To surf in an ocean populated by 1,000 sharks or 1,000 crocodiles?

At first, I thought this question was easy – it’s gotta be sharks. Shark attacks are far less common than crocodiles and, when sharks do strike, there are usually about twenty seconds of John Williams scored build-up music to alert you of their presence. If it’s an entire family of sharks bearing down on you, then you get a full two minutes AND a catchy, never-ending chorus that your kids will love. Your chances of survival are greatly increased.

But then I realized that this scenario is just like surfing a crowded break – in a sea of other predators, it’s a mentality of eat or be eaten, chomp or be chomped, shred or get shredded. You must be the most aggressive one in order to survive this ordeal and need to fight for your place in the lineup. You won’t weather the carnivorous storm merely by sitting there and hoping your calves don’t look delectable.

The late Steve Irwin proved that a croc is no match for some rope, gumption, and opposable thumbs. It is possible to wrestle this massive reptile and prove you are the dominant species. The resourceful surfer could repurpose their leash as a crocodile suppressant to keep its menacing maw at bay. However, this will not help if you surf sans leash and put others in danger. If you are one of those weirdos, then perhaps surfing with one thousand crocodiles is the fate you deserve.

You can’t say the same for the shark – good luck getting your arms around a slippery 2,000-pound fish trying to bite your face off. And while gigabytes of internet articles out there will tell you the best thing to do during a shark attack is to punch it in the face or poke it in the eyes, that Three Stooges routine of yours isn’t going to cut it. Have you ever tried punching anything underwater? Your fist may as well be moving through wet cement.

Even though I think I stand more of a chance doing my best Hulk Hogan impression in a sea of crocodiles, I would still rather surf in shark-infested waters. The croc just appears the more intimidating of the two – crocodiles look, sound, and act every part of a vicious beast ripped from a horror movie. Sharks mostly just swim around with a dopey look on their faces hoping some stray swimmer doesn’t bop them on the nose. I’m definitely taking stupid over scary every time.