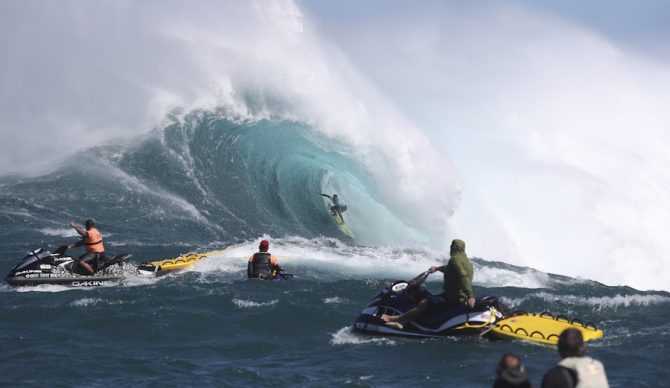 On Tuesday, January 5, Hawaii’s Department of Business, Economic Development & Tourism announced a statewide suspension of surf contests due to the COVID-19 pandemic.

“The public health and safety of our communities, contestants, spectators and guests is first and foremost in this decision. Unlike other professional and amateur events held on private property, the enforcement of crowds and large gatherings on public property will be challenging,” they wrote in a statement, adding that the Department of Health, Department of Land and Natural Resources, Hawaii Emergency Management Agency and the Governor’s office were all consulted in the decision. “We respectfully ask for your patience, understanding and cooperation in these very challenging times as we all find the way forward together during this global pandemic.”

As a result, the World Surf League followed by announcing the cancellation of both the Sunset Open on Oahu, a Championship Tour event scheduled for January 19-28, and the Big Wave Jaws Championship Pe’ahi. The contest window for the latter opened on New Year’s Day 2021 and was set to run through March 31, 2021.

“It is a testament to our surfers, staff, and the local community of Hawaii that we were able to successfully complete both the men’s and women’s opening CT events of the 2021 season, and we would like to thank the communities in both Maui and Oahu for their support,” the League said Tuesday.

Adding to the changes in Hawaii, the WSL also announced it will also be postponing the CT’s upcoming Santa Cruz Pro, which was scheduled for February 2 – 12, 2021. While there’s no statewide suspension in California, the state announced regional stay-at-home orders on December 3, 2020. In the order, California was broken into six separate regions with each officially moving into stay-at-home guidelines once they drop below 15 percent ICU availability, a metric used to monitor the number of available ICU beds reserved specifically for COVID patients (not the overall percentage of beds in hospitals). The Bay Area region, where Santa Cruz is located, sat above the 15 percent threshold when it was set in early December, but fell below the limit and went into a regional stay-at-home order on December 17, 2020. At the time of the WSL’s Tuesday announcement to postpone the Santa Cruz Open, the region sat at 7.9 percent ICU availability.

“The decision to postpone the Santa Cruz Pro, the last planned event of the U.S. leg of the Championship Tour, is based primarily on the surge of COVID-19 cases in California,” they wrote. “The postponement is also heavily influenced by the length of time our athletes have been away from home, and by the complexities of global travel during this pandemic, which would have caused significant logistical challenges for athletes and staff to travel home and return to California for the event.”

For the time being, the next scheduled Championship Tour event is April’s Rip Curl Pro Bells Beach, which will kick off the three-stop Australian leg of the Tour in April and May.