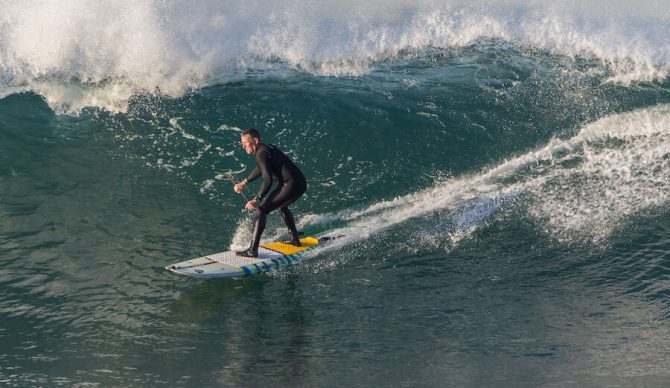 Erik Logan is already suited up when he slides into his souped-up golf cart, a light blue stand-up paddleboard tenuously strapped to the roof as he drives from his Manhattan Beach condo a few blocks to the ocean. The sun is just coming up over the horizon and the winds are light. The South Bay has waves on this crisp, late-winter morning. Good, clean waves, as waves go in this part of Los Angeles County.

Sporting short, closely-shaven hair, Logan takes a deep breath before taking his first steps into the sea, hops on his board, and paddles out to find his own peak, respectfully avoiding the crusty longboarder with the beard and giving the teenager space to throw the airs he won’t land. This has been Logan’s routine for nearly a decade now (“Oprah would refer to it as my church,” he told me). At one point in his surfing journey, he might have been spit on or hissed at for riding his SUP in an L.A. lineup. But he ignored the catcalls, eventually becoming as local as any other South Bay transplant. He gets more than a few “hellos” these days, having won over those crusty locals with his easy smile and relentless positivity.

Most of those locals know he now runs professional surfing’s governing body, the World Surf League. For three months now, his first 90 days, Erik Logan has been the CEO of the most expansive surf entity on earth, a highly visible job that comes with an unprecedented amount of sway in the ocean world – and an unprecedented amount of criticism. Logan, of course, moved into the position after he joined the League over a year ago as its director of content. It wasn’t an obvious transition having moved over from the Oprah Winfrey Network, where he helped create a highly-acclaimed cable channel for one of the most powerful figures in media.

But then the unthinkable happened. The Earth was battered by a worldwide pandemic that threatened to kill millions and derail the economy to Great Depression lows. Logan, as was his plan to begin with (seemingly accelerated now) is tasked with transforming the World Surf League from an event production company to an event production company and a full-fledged media outlet while shifting the competition format entirely. Some argue that there’s no better person to run surfing’s governing body at a time when a worldwide pandemic has brought event production to its knees. Others wonder if a man who grew up in Oklahoma City, thousands of miles from an ocean, can save the World Surf League and define the course for surfing’s future. 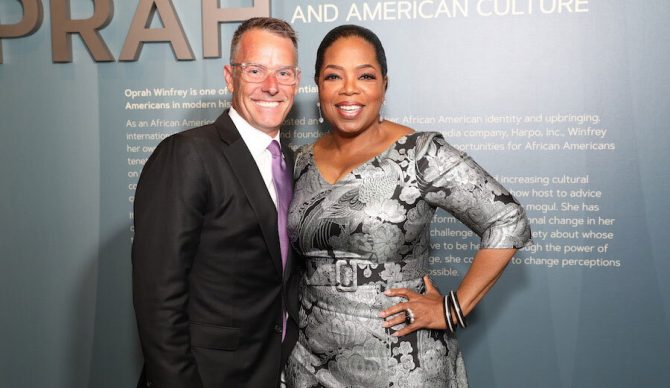 Erik Logan got started in media young, and without much ego, it seems. He was willing to dress up in a yellow duck costume, playing “Chuck the Duck” as a radio mascot when he landed a job at a country music station in high school. From there, he worked his way up to disc jockey through a year of college at Central Oklahoma State, then onto the business side, self-crafting his career while moving his family 10 times from places like Milwaukee to San Francisco, New York, and D.C. When he landed a job as executive vice president of programming and broadcast operations for XM Satellite Radio, he was a rising star on the executive side. He was brokering deals and licensing agreements (the man has an innate ability to form a pitch off the cuff) when he worked a deal with Oprah Winfrey’s Harpo, Inc. He met Oprah, who saw something in the upstart exec, hiring him away from XM to run her network in 2011 (which would move Logan to Los Angeles after OWN was opened in L.A.).

In a twist, Oprah connected Logan to the Ziffs. Knowing her top lieutenant was into surfing, she sent him a note that she’d met someone while in Fiji she’d like to introduce him to. Logan immediately thought it was Kelly Slater because of the random email address, but he kept talking back and forth for weeks via email not entirely sure who it was. Turns out it was Dirk Ziff, who ended up hiring Logan away from Oprah just over a year ago.

“When it came time to tell her I was going to leave OWN to run the studio at WSL, we had a funny conversation,” he told me. “I sat down in her office and I said ‘Hey,’ and she said ‘Hey.’ I told her, ‘It’s time.’ I explained the opportunity. She said, ‘That certainly wasn’t my plan when I introduced you to Dirk.'”

That year seems like a lifetime ago now. Just seven months into his tenure, he was promoted to CEO, replacing Sophie Goldschmidt. Logan, as a SUP surfer, and given his high profile position that seemed parallel to Goldschmidt’s at the time, was already a target for criticism from grumpy surfers on the internet. When he stepped into the CEO role, the fire burned brighter. Surfing as a sport is a confused beast – on the one side is a fiercely independent anti-establishment, on the other, a culture of athletes and a cottage youth development industry on par with major sports leagues. Pundits allege to hate competitive surfing, but love to watch the best surfers in the world at places like pumping Teahupoo or Pipe. Internet blogs gorged themselves daily with content criticizing him for his Instagram account, his content plans aimed at engaging broader audiences, even his wardrobe. According to some online pundits, he was ruining surfing. But given the cultural dynamic described above, incomparable, really to any other mainstream sport, Logan’s is an unenviable position. So he’s taken a beating online, just like Goldschmidt, Paul Speaker, (and any industry leader) before him. 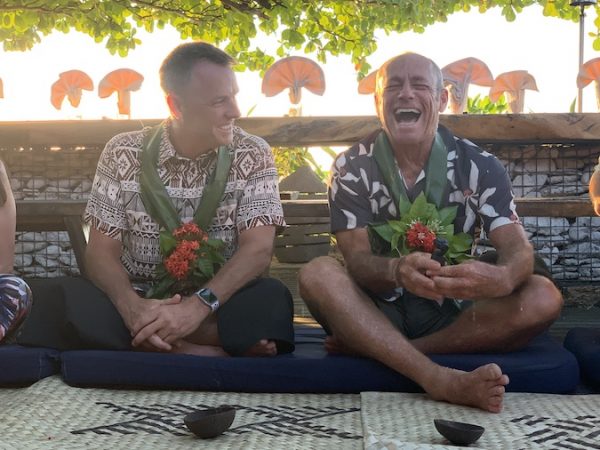 Logan has formed relationships with surfing legends. Many seem to be on board with his mission. With Tom Carroll in Fiji.

But Logan has handled the criticism differently than his predecessors. He’s leaned into it. “E-Lo is pretty lighthearted about it all,” Kelly Slater told us. “The surf media can be quick to judge and self-preserving of surfing’s history and traditions, so it’s hard for any outsider to transition in and garner respect. He seems to like the challenges and not get thrown off by the negative voices that are a constant test to that position no matter who it is. To be a good leader you need to hear and accept those voices and stare ’em down with good ideas.”

That doesn’t mean Logan’s enjoyed all the criticism. “To say that all of it doesn’t bother me isn’t true,” he said. “But I knew what I was getting into when I took the job. I’ve given time to a lot of those sites (and critics). I don’t run from it. I’m very aware a lot of decisions I make will be criticized and I’ll be the face for that. As long as it’s staged fairly, it’s fine. When it’s outside of the pro surfing arena and becomes personal, that’s where it gets out of bounds. But for the most part, it’s all been fair.”

The WSL that Logan took over three months ago is vastly different than that of his predecessors – or more precisely, the climate is vastly different. Live events like concerts and basketball games and, yes, surfing contests are canceled into the foreseeable future, with revenue falling through the proverbial floor. At this point, Logan’s push to turn the WSL into an expansive media outlet by diversifying its content beyond high-performance surfing with new franchises like Surf Breaks, World Surf Weekly, Mic’d Up, and beyond isn’t just a power grab. It’s meant to increase viewership and ad revenue at a time when the entity’s primary influx of cash from events has been cut off. “I want to empower storytellers to explore the different dimensions instead of one point of view,” Logan explains. “The friction between crafts you ride that defines you, to transformational stories, it’s interesting to expose those, and all of that tension is what drives the culture. Therein lies the opportunity.” 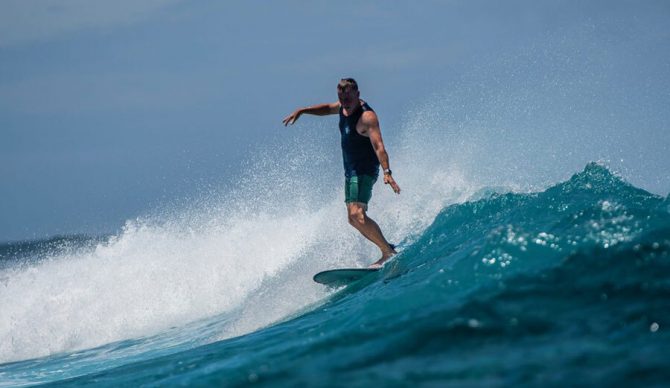 It can be lonely at the top. But at least this CEO surfs. Photo: Joliphotos

While it may alienate ardent fans, it’s a play to solidify the company and as Slater says, pro surfing has never really been “stable.”

“Everybody is gonna fuck up things here and there and rattle cages when they’re decisive,” Slater says. “A lot of interesting things are happening, and while the critics will be vocal and many, surfing has literally never been in a comfortable and safe place as a sport. The tour used to borrow money from surfers and owned nothing of its product. Without appeasing sponsors and entertaining and inviting outside (investment) surfing will remain somewhat obscure. If we’re going to embrace it as a professional ‘sport’, it may not always be the thing people are used to, which also didn’t seem to impress even the most die-hard of fans. E-Lo has the determination and ability to cut through a lot of that and find something that can appeal more broadly than just to the hardcore and remain credible, because those voices are heard, too.”

Just before Logan left the Oprah Winfrey Network, Oprah was hosting one of her team’s weekly early-morning calls. It was 7:30 a.m. on the West Coast and Logan was missing. “Oh don’t worry, he’s still at Church,” she said. “He doesn’t get out until eight.”  Surfing for Logan has become a spiritual commune of sorts. That’s what surfing is to him. As the WSL’s new head, he’s tasked with answering the question, “What is surfing to you,” for millions of people. And he’s leaning into it: “One of the reasons why I love my job,” he says, “is that the search for that answer is where the magic is.”