WSL Flirting With Switching To Single Fin for Longboarding Competition 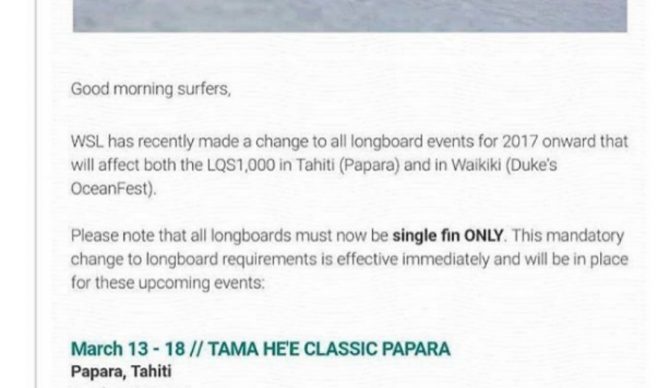 The World Surf League is apparently flirting with making substantive changes to its longboarding competition, including mandating single-fin setups for all surfers.

In a slightly confusing twist, on Monday, the league told athletes that the single fin rule had been instated, but “within minutes after issuing, we received word from the Commissioner’s office that the rule would not be implemented, ” WSL spokesperson Lauren Rolland said in email correspondence. The league’s change of heart came about because “more discussions needed to take place to involve the surfers in the decision,” and that the rule would not go into effect this year.

The league then communicated with longboarders, telling them in a separate mass email:

“Appreciate the feedback on changing to single fin only. We apologize that more extensive communication between the WSL and the athletes was not had, as such we are tabling the proposed adjustment. Understand that it is the WSL’s goal to create a longboarding product that is sustainable and celebrated, we look forward to more conversation regarding this over the coming season.”

If the rule ever takes effect, it may be one step in reinvigorating what some critics say is a stale competition format, ushering in more classic longboarding technique while perhaps de-emphasizing the thruster-setup-on-a-longboard mentality.

On Instagram, longboard legend Joel Tudor posted an image apparently showing the communique sent to surfers, writing in the caption:

“The times they are a changing! Been a lot years trying to accomplish this – it will still take time to iron out the kinks – congrats @wsl on making a change for the better.”

In a comment, Tudor added: “from my understanding it will be a complete rebuild of the format.”

If you are not following @waves_tubes_freaks …you should!! Best surf humor I've seen @wormtown @sealtooth