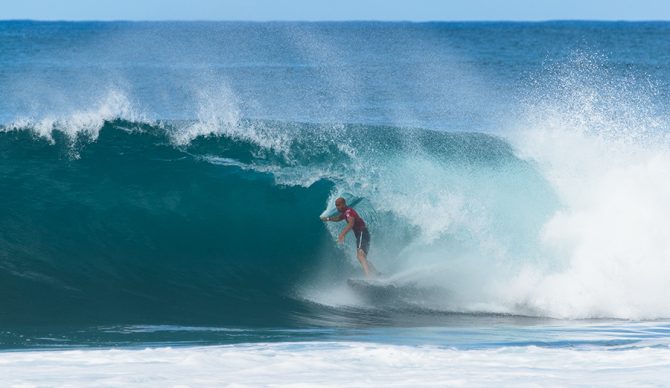 The Billabong Pipe Masters has been suspended due to COVID-19. Here, Kelly Slater pulls into a barrel at Backdoor on his way to winning his first heat two days prior to the announcement. Photo: Brent Bielmann/World Surf League

On Friday afternoon, the WSL announced on its website and Instagram that the organization had decided to suspend competition at the 2020 Billabong Pipeline Masters due to COVID-19.

The league released the following statement:

“The WSL has decided to suspend the Billabong Pipe Masters presented by Hydro Flask competition as a result of positive COVID-19 tests within the WSL staff, including WSL CEO Erik Logan.

The WSL is committed to prioritizing the safety of the athletes, staff and surrounding community above all else, and is working closely and transparently with the Hawaii State Department of Health to determine the path forward.

As part of the league’s COVID Safety Plan, anyone who has returned a confirmed positive test is self-isolating until they are cleared, and contact tracing protocols have been fully implemented. The WSL does not believe that any athletes have been exposed and will continue to execute the safety protocols.”

Through conversations with WSL leadership ahead of the competition, it was clear that the organization had developed a thorough gameplan to optimize safety for staff, competitors, and the community while navigating the challenges of operating during the pandemic. In a fundamental shift, in-person spectatorship at the competitions is forbidden as the events themselves have been reclassified as productions. Regardless, assembling an international cast of competitors and producers represents a daunting challenge with significant risks, and the league will be forced to continue to adapt.

We reached out to Kelly Slater to get his take on the announcement and the reality of executing events for the upcoming year.

“No opinion,” said Slater. “Hope we get going while swell is good though. No idea how this will play out.”

The WSL also suspended the women’s competition due to a fatal shark attack at Honolua Bay.

The future of both events remains uncertain. Stay tuned for more information on worldsurfleague.com.