You “Catch” Waves: The Hidden Predatory Nature of Surfing 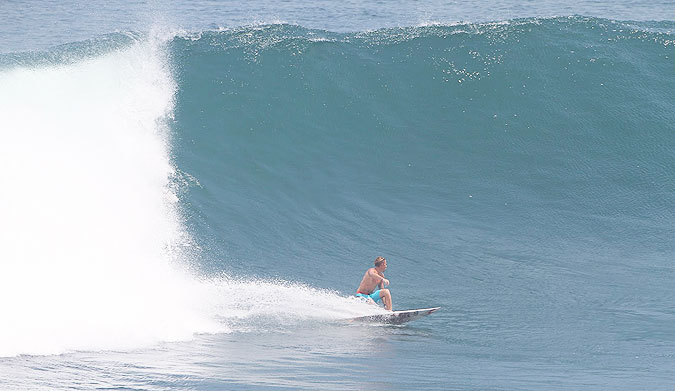 Are you predator, or are you prey?

Strangely enough, it took being deep in the beating heart of one of the truly most peaceful environments on earth to realize the truly predatory nature of surfing waves of consequence.

At the far outside section of Indonesia’s not-so-secret gem, Uluwatu, lies a section known as Bombies. It was here I was humbled, then consequently overjoyed in a way that brought survival to the forefront. I am not speaking of predatory in the aggressive sense. Nor in the murder sense (save for the “killing it” jokes), but in fact the analogous game of the hunt; the hunger and the focus that are integral in the will to survive when catching a sizeable wave.

The first true SW set had arrived. At that point, it was by far the largest waves I had seen to date. Windmilling, just barely making it over the first wave  of the set, I quickly realized that I was in over my head and needed to really drive myself over the edge to overcome the lump of fear in my throat, and avoid the cluster of vibrantly colored reef below.

If I did not, I knew from past smaller scale experiences that it would only make it worse. Hesitation can be your worst enemy. I knew that. If only I had listened closer to myself.

Paddling like a maniac, I found myself just over the pitching lip of the first wave, only to see the second wave in the set coming. Seeing that it was a larger, and would break a bit further outside, I mustered my gusto and decided to give it a look. I was the only person in position at the time, and it was mine if I wanted it.

After deeply stroking, I got to the line where the lip begins to rise and turn outward. I pulled back, seeing that I was a bit deep, but swelled with of pride. I now knew what a proper set wave takeoff would look like. I felt prepared. More waves were coming, and I was excited. I ripped rails and spun around to see wave number three. Far outside, and far bigger than the first two. The ride and joy of this set. I wore it like a hat.

A few hundred yards later, after getting rag-dolled by eight feet of whitewater getting dragged over two feet of foam-covered reef, I was readying myself to try again.

In an ancient Buddhist stronghold of peace and love and non-violence – overwhelming to my western eyes – I realized that I felt a deep hunger.

Ease your cringing hearts, soul surfers. My hunger was in no way less fun or recreational, but I felt a sudden change in myself. My eyes were peeled, squinting at the outside of the line-up, where I would wait for a set. My head, instead of being nervously perched looking for danger, was lowered; more streamlined. My back  was tense. I was pulling hard, digging deep, and rapidly but steadily paddling for the outside. The outside, where my wave waited.

I observed. I watched each ride, successful or not; every wave ridden or empty. Some were empty for good reason. The ones that started grinding on the upper reef resulted in glory-shot barrels, but were unmakeable. The waves that swung a bit wider were a hair flatter, but longer and bigger.  I watched a man scream by on a twelve footer, and as he flew by, laying hard into what seemed his thirteenth cutback, I realized that I had not seen him give one inch of ground as he waited for his wave to come.

In the wild, if you show your cards too early as a predator and scare the pack, you not only ruin your chance with your prey, but also take yourself out of position for the next opportunity. You will not survive.

Sitting out the back, I waited for what must have been an hour. With a normally manic and admittedly short attention span, the flogging I endured previously was enough to remind me that I did not want to end up on the inside again. Talking with the older men out the back, hearing the comments about how my board was much too small (a 6’7”) and how I was by far the youngest person in the line up was entertaining, but I was not distracted. Wave number one, and half the pack attempted to clear out. Wave number two, and the local hotshot from earlier was way too deep.

Now alone out the back, wave number three was all mine. Time seemed to freeze. The predatory analogy continued as I got to my feet and truly over the ledge. My fins locked in. I have never gone faster; never seen more wall in front of me. But when I sunk the fins in – my metaphorical teeth – stabilized rail and tail after a late drop on my undersized roundtail, and I drove that first bottom turn towards the far distant shoulder, I smiled.