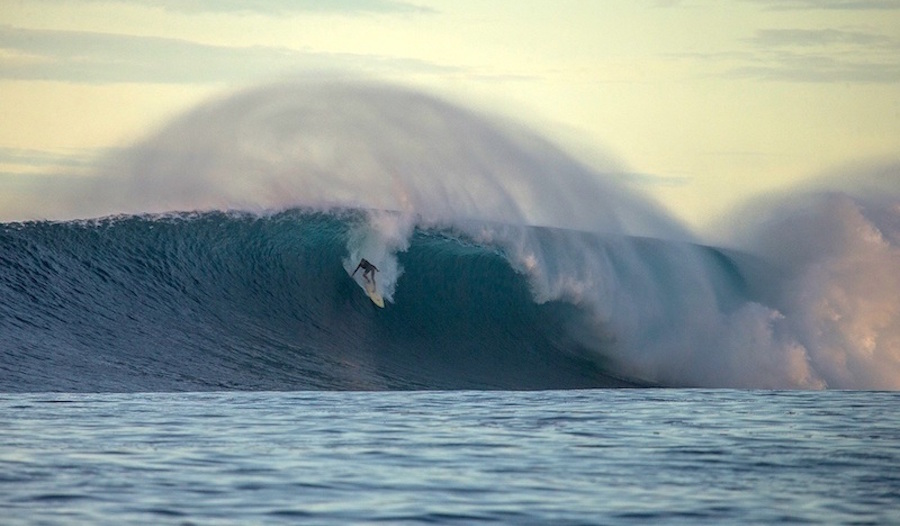 How’s that for an evening commute? Photo: Win the Island Estates

What if I told you with 50 bucks and a shred of luck you could own a slice of paradise? Sounds crazy right? Wrong. The Beitz family, owners and operators of Nautilus Resort on the island of Kosrae in Micronesia, have decided to sell their resort in the most unconventional of ways. Instead of negotiating with would-be buyers with adequate cash flow, the Beitz’s have chosen to raffle off the rights of their resort–with ticket packages starting at $49. In other words for the price of a single ticket, you could become the owner and operator of a tropical resort–adjacent to some pumping surf I’ll add–overnight.

I talked to owner Doug Beitz to get the scoop on the particulars of the raffle and where the idea came from in the first place.

So first, what prompted the idea to raffle the resort?

Around December 2014, my wife Sally and I announced to our family that we were going to sell the Resort and return back to Australia to live near our family. We have 4 boys and one of them had given us a granddaughter. She, along with our son and daughter-in-law, had lived on the island with us for a year from when she was 1 to 2 years old, which as a grandparent it was really wonderful to see her everyday. When they moved back to Australia that little girl took our hearts with her, and helped prompt our decision to move back to Australia. We both also have parents in their 70s and 80s, and they have been asking for a long time when we were coming home.

Anyway, I slowly started to put facts and figures together getting ready to sell the business. Then, at the end of January 2015 my son Adam arrived unannounced on the island for a month or so vacation, and started casually talking with us over the next few days about our plan to sell the business. On one of those days I had a fleeting thought for about a minute that maybe we could raffle the Resort using crowd funding, but the thought went as quickly as it came and was was not likely to return. Then the next day Adam said to me “why don’t you raffle the Resort instead of selling it?” I immediately remembered my brief thought from the day before and thought this was no coincidence. Adam then brought out all of his research that he’d done over the previous weeks, as he was very serious about the idea. After a day or so Sally and I both agreed to go for it. 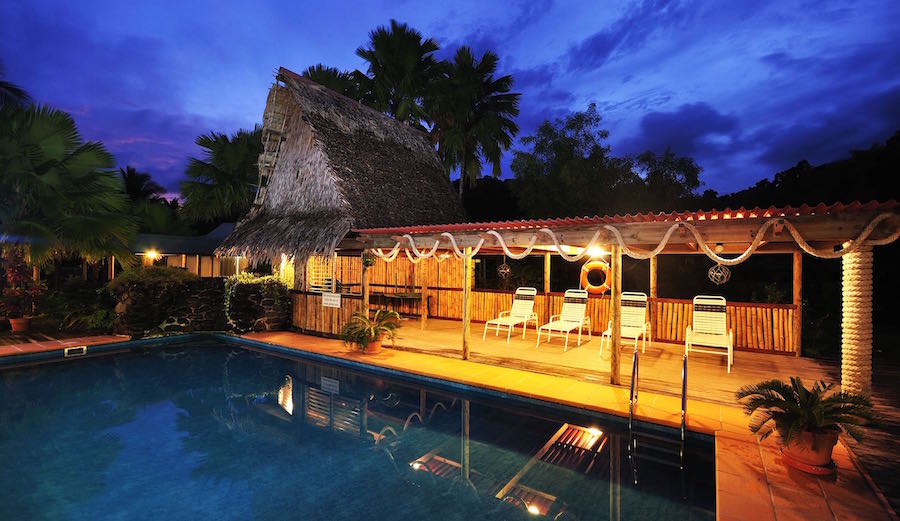 The Nautilus Resort is located on the island of Kosrae in Micronesia. This could be your new 40 hour “work” week. They say money can’t buy happiness, but 50 bucks for this view doesn’t sound half bad. Photo: Win the Island Estates

Looks like you guys had some success with the Indiegogo campaign for solar panels, but why the entire resort? And why now?

I loved the solar panel crowd funding project, to be able to put that together with no debt was awesome. Banks are not my favourite organizations, and being able to achieve something outside of their system and control excited me. It has worked so well that part of my handover of the Resort to the winner is to show them the benefits of the solar panels and how to crowd fund to install more of them. If we weren’t moving on, I would have already completed crowd funding part two for a second lot of solar panels.

So the idea of handing the Resort to an average everyday person like Sally and I excites us too. We’ve received emails from hundreds of people who have bought tickets telling us their story, and how much they relate to the “Our story” page on our website. The world is changing fast, look at what Uber and Airbnb have done to the way business is done in those spaces. Average everyday people are being empowered by these companies, peoples lives are changing for the better, I believe. Last weekend we caught about 10 Uber’s around LA and talking to all of the drivers they love the flexibility etc. they have and the chance to become at least part-time self-employed. We think that raffling the Resort is the start of a new way for lifestyle business transfers to be done.With the amount of positive attention that we have received in the past 6 weeks, there are a lot of people out there that are as excited about this idea as we are. If we were to sell the business in the traditional way, that would be OK, but it would definitely be boring. Right now we are on the ride of a lifetime, this raffle is excitement plus everyday!

What are the major goals of the contest? And what is the ideal outcome?

The first major goal is to transfer ownership of the corporation to the lucky winner after we have sold enough tickets. Another major goal for our son Adam is to find out how successful the whole concept is, so he can see the viability of continuing the idea of raffling other lifestyle businesses around the world. The ideal outcome is for the minimum amount of tickets to be sold in the 3 month timeframe that we have set, and for the winners life to be changed in an amazingly positive way.

How many tickets have been sold so far?

Getting into the terms and conditions a bit, if less than 50,000 tickets are sold, half of the prize money will be split between the corporation and the winner. What does the corporation plan to do with the money and the resort in the event ticket sales don’t reach that threshold?

This clause was put in as a safety valve for us in case we completely over estimated how successful we thought it would be. There is no intention or hope from us that less than 50,000 tickets will be sold. That being said, to date we have out laid a considerable amount of money on marketing etc, and the 50% that would be left for us would be used to pay credit card fees to the bank, tax to the Micronesian government on the ticket sales, and to reimburse our marketing expenses which are high. People don’t realize that it took us 14 months to put the whole thing together, and you can spend a lot of money in that amount of time. If that does happen, we will then go down the boring road of selling it in the traditional way.

Can you explain a little bit about the logistics of the transfer of the property?

If the winner is not a Micronesian citizen, they will need to obtain a foreign investment permit. The main criteria to receive it is they will need to provide a medical and police clearance from their country of residence. After this we can start the one month hand over to the winner (or their appointed manager).

I’m definitely no expert, but it looks like the island of Kosrae allows for 55 year leases with the ability to renew for another 55. And your family has owned the resort for 24 years. So the new owner will have at least 31 years with the possibility to renew? Am I getting that right?

Our lease has approximately 26 years and 9 months to go. The laws regarding land leases in Kosrae have changed a little since we took ours out. Way back then we also had an option to lease the land for about 18 months before the full lease kicked in, while we obtained foreign investment approval and finance.

Also, the 16 long-term employees referenced. Are they local employees and will they all stay on? Is there any other part-time staff that is unaccounted for? And if so, what will happen to them?

Yes all of the 16 staff are locals, and they will stay on. Employment is hard to find on the island, they will all be keen to continue working there. There are no other part-time staff.

I have to ask: what if the winner is a terrible resort manager/business person? I mean, I understand they can hire someone to manage the resort for them, but what if they’re the worst kind of person. Like the kind that doesn’t know they don’t know how to manage? Is there anything in place to make sure the reputation of the resort is maintained?

What if we sold it in the traditional way and the new owner was exactly the same as the person you described? I have seen plenty of wealthy, middle class and low income people who are really bad at managing and getting along with people. No matter if we had sold it to someone who either had the money to buy it or the ability to obtain the necessary finance, or someone wins it in the raffle, the new manager will be a human being, with all of the potential awesomeness and awfulness that we all have developed. If someone purchased the Resort in a normal way and ran it down, there is nothing I can do (except cry), and the same will be true with the winner. It is possible they will do a better job than we have done too.

Assuming all goes well, what’s next for you and your family? Any plans to open another resort anywhere else?

No plans to open another resort. Right now our new career goal is to be professional grandparents and live near our families, but for me personally I hope to be able to come away from the raffle so that I choose when I want to work, as I want the option to see needs and be able to offer my time an expertise for free to people until I think I have helped as much as I can. For example, yesterday I saw a great crowd funding idea to create some off-the-grid low cost housing fairly close to a major central business district, but the marketing was put together badly. So I would love to offer my help free for a week or a month or two for things like this to help make the world an even better place to live in!


Editor’s Note: To buy tickets or to learn more about the contest visit wintheislandestates.com.