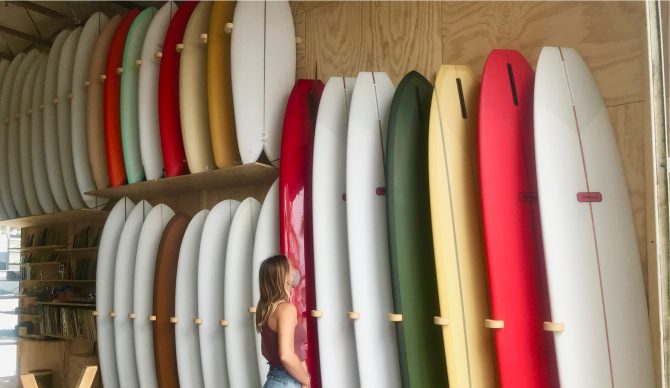 Editor’s Note: The women interviewed for this piece asked to remain anonymous to protect their hard-earned standings in their respective communities.

A girl walks into a surf shop and the ensemble of mansplaining commences. Pretty much every female surfer has a story of feeling patronized in a surf shop. As much as we like to think surfing is becoming more progressive and inclusive (and in many ways it has), surf shops seem to be stuck in the eighties with the automatic assumption that girls can’t surf. I sat down with some female surfers from different areas of California to gauge their experiences in surf shops.

One female surfer entered a surf shop in Santa Barbara looking for a new longboard for summer. “They literally assumed I didn’t know how to surf and said ‘Weston boards are great for beginners,’” she recounted to me.  “I’ve always felt that way, even in surf shops growing up in Northern California. I’ve never felt fully comfortable there without going in with another guy.”

Another young woman told me about one of her experiences in a Central Coast surf shop: “I walked in to get tropical wax for an upcoming surf trip and the guy behind the counter said ‘this wax is meant for warmer temperatures or to be used as a base coat that goes underneath,’ assuming I didn’t know what I was buying,” she said.

“Most of the time when I walk into a surf shop they automatically assume I don’t know what I’m talking about,” she continued.  It’s not uncommon for women to feel the need to prove themselves when in the water as well. Surf shops are a testament to what it’s like to be a female surfer in general: a constant struggle to be respected and taken seriously in the lineup.

It’s a whole other struggle for women that work at surf shops to be equally respected as their male coworkers. A 22-year old Santa Barbara surfer was explicitly told by her managers she couldn’t work in the back with the boards and consignment room because she was a girl. The girls were only to work in sales at the front of the store. “Guys want to walk into a surf shop and see hot surf chics, but when it comes down to helping them with anything surf related they don’t want girls telling them anything about surfing,” she said. 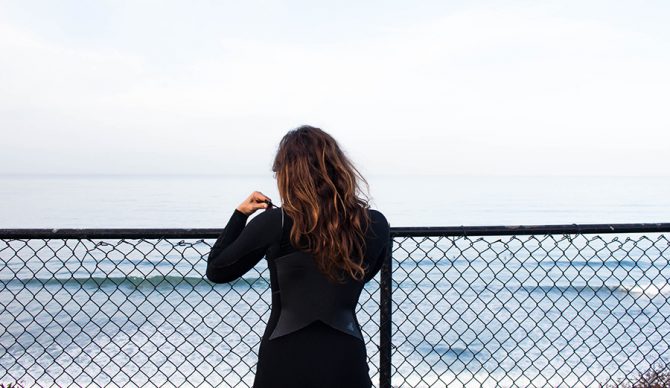 “Can I speak to the manger?” “Um, I am the manager.” Photo: Katie Rodriguez//Unsplash

She told me about one of her coworkers, a bleach-blonde surfer looking dude who had just moved from the Midwest to Santa Barbara. After three months of working at the shop he was promoted to working in the back over another girl that had been  there for three years. He got the job because he looked the part despite his limited surf knowledge. “My manager blamed it on the customers. He told me ‘All the old local guys that come in here don’t want a girl helping them,’” she said. She quit that day.

One member of the UC San Diego women’s surf team who works at a local San Diego surf shop felt like she was generally respected by customers. “I dress like a tomboy and give off a surfer vibe,” she said. However, when customers call to inquire about boards, she usually feels like she’s not taken as seriously. “When I answer the phone and they hear a girl’s voice they’ll usually ask to be transferred to the board department, but I tell them we don’t have a separate department and that I can help them out. They’ll be hesitant but once I start talking, they realize I know what I’m talking about,” she told me. “But one time someone specifically asked to speak to another guy,” she laughed. “Us surfer girls just accepted this as the way it is. You have to prove yourself to get to the point where you want to be.”

Of course the atmosphere in each surf shop is different depending on the people they hire, but the general overwhelming implicit bias towards female surfers breeds a culture where women have to work harder to gain equal respect that men automatically assume. Until then, we’ll just keep proving them wrong.