Your Guide to a Nosara, Costa Rica Couple’s Trip for the Average Surfer 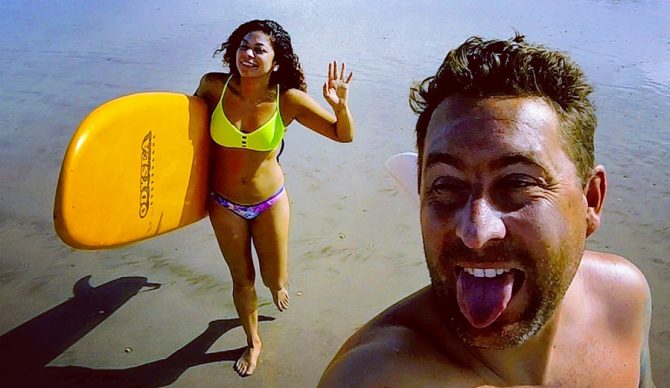 There are a plethora of explorers roaming the globe these days. I meet all types while on surf trips myself. There are soul searchers, retired couples, holidaymakers, and of course, surfers.

We can fit all these different types of travelers and explorers into two groups: those who can afford it and those who can’t but do it anyway. I fall into the second category. I spend most of my spare cash on traveling and sacrifice other things people might call luxuries. It also helps that I don’t have kids. And so on average, I manage three decent trips abroad a year.

My latest adventure was a trip for my girlfriend’s birthday. Three months prior, I started researching the best place for Steph and I to go for an all-out adventure. She loves hiking, yoga, working out, and surfing, so where better than Costa Rica? After a little more research, we settled on Nosara.

Three months later, we were on a flight from Los Angeles to Liberia. It was the last weekend of May and the start of the down season for tourism. We slipped through customs easily enough with one backpack each and a board bag. A long line of travel reps and taxi drivers were trying to woo us as we left the terminal. Spotting the surfboard, they yelled things like “Surf’s up, brah,” throwing shakas while promising to take us to the best waves. We eventually settled with Rolando, a mild-mannered Tico who was happy to drive us to our AirBnB in Playa Guiones — a bumpy two-and-a-half hours away. We arrived late in the evening in the pouring, warm rain and eventually found the surf shack we had booked. We arranged for Rolando to pick us up in six days, said goodbye, and settled in.

The next morning, we rented a quad bike and began to explore. We paddled out at Playa Guiones with chest high waves and dark cloud cover. The water temp was like a warm bath and the crowd was thin. Some of the heaviest rain I have ever seen — even having grown up in England — soon started pouring down on us. Even though the waves were awful, being among the elements and surfing in a tropical downpour was a fulfilling experience for our first session in Costa Rica.

Over the next few days, we discovered more of the waves on offer in the area. The weather for the rest of the trip was 85 degrees and sunny with the occasional tropical shower. The waves were chest high and clean most mornings. In fact, the waves in the area are great overall. It’s a region that seems to have something for everyone, especially the average surfer. What it lacks in punch it makes up for in consistency.

Steph and I are part-time adventure seekers, meaning we work our butts off, but always make time to be outside and live on the weekends. Our six-day trip to Nosara was our time to go all out and that’s exactly what we did. We’d rented a quad, took it everywhere, and abused it as much as anyone should be allowed to in a foreign place. On day three, we went on an off-road quad adventure tour with a weather-beaten expat guide from the US who likes surfing and beer. John took us through stops in the valleys and mountains, river crossings, and even one stop through a local village for what I can only assume was a visit to his mistress. It felt like a “my mate John will take ya! He knows all the best places” kind of tour.

The next few days were spent surfing, exploring, practicing yoga, and even taking some Muay Thai lessons. I broke my foot doing the latter the day before we left. Thanks to that, I can now also highly recommend the Costa Rican pharmacies for painkillers and crutches.

I absolutely love Nosara. I would say that it is the best place I have visited so far on my average surfer travels. But (yes, there is a but) something bugs me deep down. I can’t quite put my finger on it. I think it is an anxiety and a fear of what’s to come.

The stereotypes in Nosara are almost comical. You don’t have to search far and wide to meet all the characters you would expect in such a town. A Hawaiian I once met on the Big Island described them as “trust fund hippies.” They live “off the grid” because they are tired of society, yet are heavily bankrolled.

I think my fear for the future of Nosara came from my conversations with the locals. The boutique surf camps, yoga studios, the juice bars, and the resorts all bring plenty of jobs but where is the line? I would say Nosara is at that line where development borders on dilemma.

Stop now or lose exactly what makes it great. And what makes Nosara great now is a delicate balance of traveling yogis, surfers, bars, wildlife, unpaved roads, and most of all, the locals. Every step toward future development is a step away from the town’s roots, no matter how well-intentioned. Paving the roads in Nosara will bring more casual tourists and casual tourists demand comfort and convenience. This, in turn, will bring the next high rise, the next resort, and so on.

So as Steph and I got to experience it, Nosara is still the perfect balance of off the grid adventure and traveler comfort. That is thanks to everyone there, including those trust fund hippies. In Nosara, you can still be on your adventure, on a dirt road, in a jungle, or on the beach among snakes and crocodiles, feeling like you’re a million miles from civilization. Three hours later you can get a craft beer and the best Ahi Tuna you’ve ever had after parking your quad in the mud puddle on the road. I say leave it as is and only attract visitors who really want to be there. It’s a truly special place already. 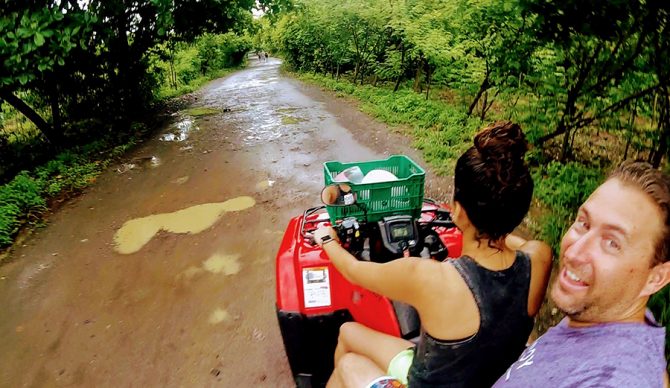