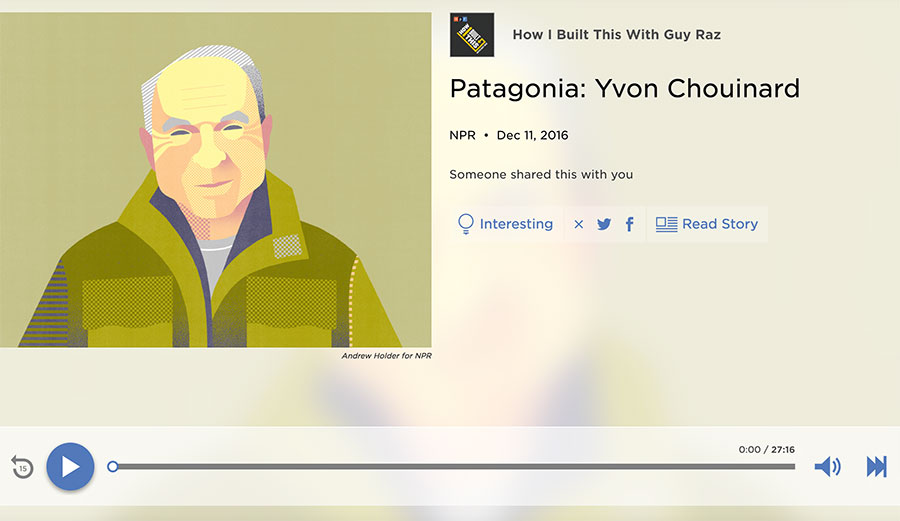 Click the image above to listen to the podcast on NPR’s site.

“If you want to understand the entrepreneur, study the juvenile delinquent. ‘Cause they’re saying, ‘You know, this sucks. I wanna do it my own way.’ That’s what the entrepreneur does. They just say, ‘This is wrong. I wanna do it this other way,’ and that’s the fun part of business actually. I love breaking the rules.” – Yvon Chouinard

At 78, Yvon Chouinard has managed to transform his obsession with climbing into one of the world’s most well-respected brands. With a cultish following that relishes Chouinard’s seeming disregard for flourishing sales, Patagonia started with Chouinard as a blacksmith. He converted a chicken coupe into a shop and pounded hot pieces of metal into carabiners and pitons. Unlike their competitors, they were designed to last, and they cost more than the other options available. But it wasn’t until Chouinard discovered the rugby shirt and its usefulness to hardcore climbers that Patagonia really began to prosper.

“Then I started making some climbing shorts and pants, and one thing led to another, and I realized it’s a lot more profitable than making pitons,” Chouinard tells NPR’s How I Built This.

The interview reveals a lot about Chouinard’s psychology. He learns by doing, and by his account, his business instinct is accidental.

“I didn’t respect businessmen,” said Chouinard. “I was a craftsman.”

It seems like he’s become quite adept at being both.

For more in NPR’s very interesting series How I Built This hosted by Guy Raz, follow this link, and check out their feature with Clif Bar’s Gary Erickson here.