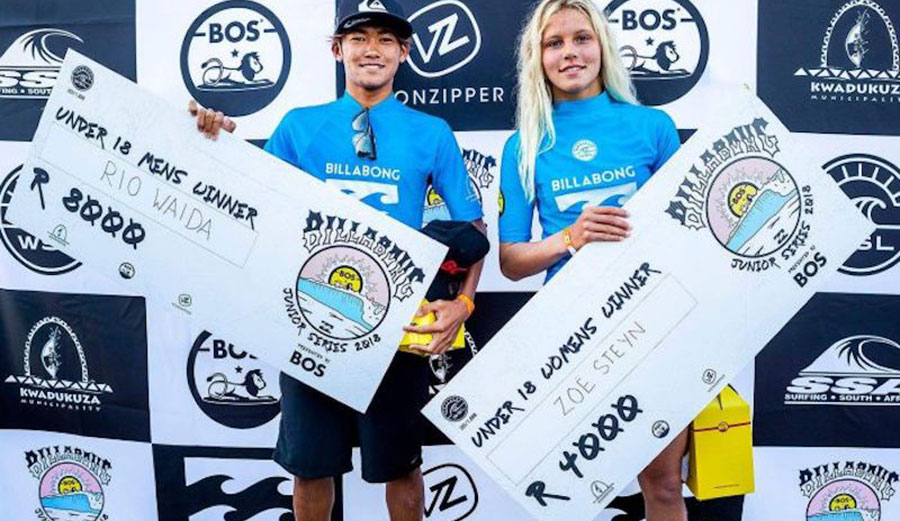 Late last month the photo above bounced around the internet like a stray bullet ricocheting across the surf industry. The gist? Rio Waida (left) and Zoe Steyn (right) were both photographed after winning the Ballito Pro Junior – same event, same waves, and one check with exactly half the winnings as the other.

Mainstream media outlets from Mashable to the Guardian glommed onto the story all echoing similar sentiments: “Same waves deserve same pay.” The issue at hand, as one contributor pointed out, is more complex. But a photo, as they say, is worth a thousand words. And it got the people sufficiently riled.

So riled, in fact, that Lauren Jauncey from Sandy Bay, Tasmania started a GoFundMe campaign to gift Zoe Steyn the 4,000 rand ($400 aud) difference.

The campaign has since raised $1,000 aud – the original intent being Zoe would get $400 and anything else would be donated to the Layne Beachley Foundation. But in an update, Jauncey explained that she reached out to Steyn who turned down the cash and asked it be donated to charity.

“It took me a few days but I was eventually able to make contact with Zoe,” said Jauncey. “She was so grateful for what we have done for her and she asked if, rather than send her the money, would we donate her $400 to her local surf charity who are focused on getting kids off the street and into surfing.”

When asked about it Zoe responded, “Yes there was a group of people in Australia who collect (sic) money for me but I asked if they don’t mind donating it to our local township surf project, which they have done, so smiles all around.”

Zoe’s selflessness is incredibly admirable. But on some level, it’s telling that she didn’t accept the funds raised on her behalf, nor, as far as we can tell, participated in the debate that swirled around a photo of her and another competitor. It begs the question, before launching into shaming event organizers, the World Surf League, and the like, did one person stop to ask Zoe Steyn what she wanted? If she cared how an image of her celebrating a contest win was being used?

Not to undermine the pay parity conversation itself – it’s one that, in this writer’s humble opinion, is long overdue. Still, when spectators become irate and raise hell (and funds) on someone else’s behalf – and the person who was wronged or victimized is either silent or unable to raise their voice over the shouts of everyone else – is it possible the victim is being used for someone else’s agenda, albeit a noble one?

According to the GoFundMe page, the original intent was to donate the remaining funds ($600 at this point) to the Layne Beachley Foundation which is committed to helping women succeed by providing financial and mentoring support for them to reach the next level. After Jauncey connected with Zoe, though, the foundation suggested that instead, they split the funds 50/50 with the organization Zoe mentioned. Again, not to discount the work of the Layne Beachley Foundation, but it would seem there are bigger issues nearer and dearer to Zoe Steyn’s heart. If only someone asked.

Editor’s note: This story was updated to include a comment from Zoe Steyn.