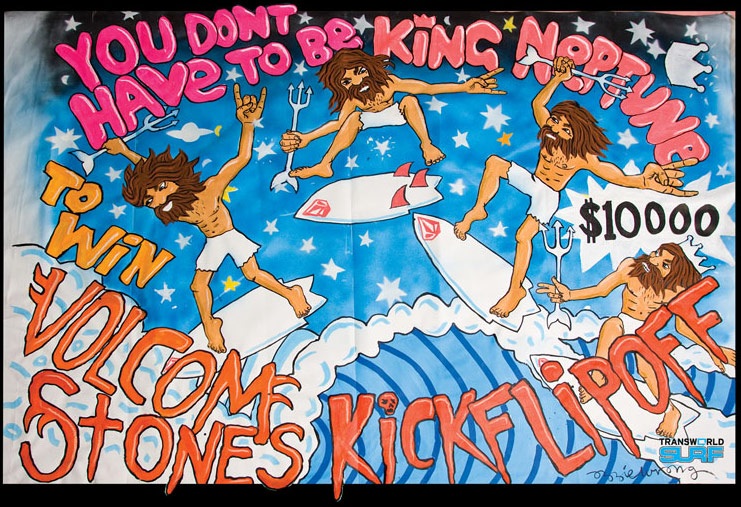 Updated, 3/10/2011 11:28 PM PST: Volcom had a change of heart, and decided to award Zoltan Torkos the $10,000 prize. However, they acknowledge that the air was not above the lip, and have revised the contest to award $20,000 to the first surfer to perform a kickflip above or off the lip.

This video might not have the pizazz of a lot of other surf clips, but it carries with it a piece of surfing history. For nearly four years, surfers have been attempting to land the first ever documented kickflip in an attempt to win $10,000 and a variety of other prizes in a contest called the Volcom Stone’s $10,000 Kickflip-Off Contest. There have been a lot of kickflip attempts over the years, with all previously submitted videos showing surfers getting oh-so-close, but failing to land a clean documented kickflip. Finally, after many years of feeble attempts, it was a local Northern California surfer who finally pulled it off.

Santa Cruz surfer Zoltan Torkos was surfing at world-famous Steamer’s Lane in Santa Cruz, where he pulled the trick that should award him $10,000. Here’s the footage.

Update: Volcom has announced that Torkos has not won the contest, citing a violation of rule three.

According to a press release distributed by Volcom: “Zoltan’s kickflip is clearly below the lip and not a real air. Zoltan has pulled the first kickflip on a surfboard, but the $10,000 still remains up for grabs. We called Zoltan with our decision and he replied, ‘I’m not here to argue against your decision, but I am here to revolutionize surfing.’

1. Your entry must be on video from the start of the trick through the ride out. No photos allowed.
2. This contest is open to everyone. The contest begins today November 21st, 2007, and will run until there’s a winner.
3. The kickflip must be a real air “above the lip” – No backwash, No chop hops, or anything in the flats or below the lip of the wave.
4. All waves must be self caught – You must paddle into the wave. This means NO tow-ats, step-offs, jetskis, boats, dinghys, winches, canoes, oars, helicopters, dolphins or assistance of any kind.
5. No grabs of any kind. Not before, not after, not during.
6. You must completely “ride out” of the kickflip. That means if you land on the back of the wave and fail to continue surfing the wave – it’s not a make!
7. No heelflips. Or else we’d have called it the Heelflip-Off.
8. No shoes. Who surfs in shoes anyway? Regular “made for surfing” booties are acceptable.
9. You must be riding a real surfboard with at least one fin. No boogie boards, softboards, wakeboards, wakeskates, skimboards, kiteboards, trays etc.

While Zoltan may not have nabbed the $10,000, we still praise him for his accomplishment. Congratulations to Zoltan Torkos for pulling off the first documented kickflip in surfing!