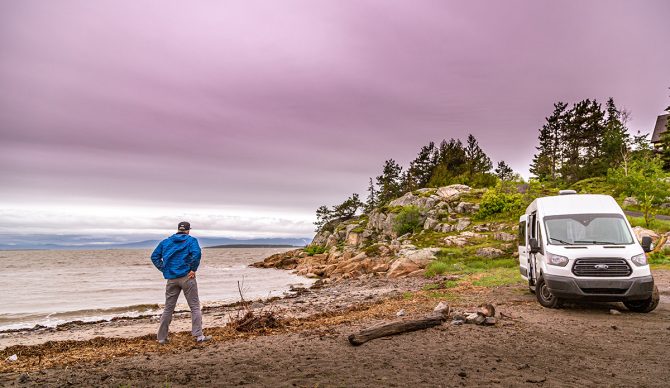 I’m not sure if you’ve noticed, but living in your automobile is no longer exclusive to the perennially unemployed. Everyone and their dog is in on the van life movement. It’s hip, hot, happening, and never has the question, “you wanna have a look inside my van?” been such a socially acceptable proposition.

In truth, the van life trend is but one tiny offshoot of the much broader minimalist movement. People are shifting away from the fleeting pleasures of materialism, embracing simpler lifestyles, and prioritizing life-enriching experiences over monetary wealth. That’s all pretty freaking awesome if you ask me.

But in spite of these good and wholesome intentions, the van dwelling community is at risk of collapsing under the weight of its rapidly growing population. In places where the trend has taken off, like California, the UK, Portugal, and Northern Spain, to name a few, parking lots are being overrun with campers and locals are getting understandably frustrated.

One of the main problems with living in camper vans is that they generally don’t have toilets. This means their inhabitants are either doing their business in public toilets or in the dirt. The latter is fine if only a small handful of people are doing it, but this form of travel has become so popular that locals in many van-tolerant areas have seen their beach parking lots slowly degrade into virtual sewers. I’ve seen this with my own two eyes in the coastal Welsh village where I sit writing these words. Immediately after the easing of Britain’s Coronavirus lock-down, one of the parking lots in the village with stunning views over a pristine tidal estuary began to fill up with camper vans. It is illegal to wild camp in Wales without the landowner’s permission and after only a few weeks, the owner of this particular lot got so sick of stepping around human feces and litter during his walks that he decided to close the car park to everyone — an anecdotal casualty of van life’s growing popularity.

The villagers seemed pretty relieved with the sudden absence of unsightly vans, but it was a shame it had to come to this. A lot of the locals here own vans themselves and often spend weekends camping on beaches and in the countryside. For years, the authorities either looked the other way or didn’t realize it was going on until an influx of tourists raised the number of vans to unsustainable levels.

Of course, this isn’t just happening in Britain. Last winter, my boyfriend and I drove our own camper van along the coast of Northern Spain and down the length of Portugal. Everywhere we went, there seemed to be rumors of local authorities cracking down on campers or banning them altogether. We understood why whenever we saw the parking lots. You could barely walk through the sand dunes without stepping on a human turd and emerging with a trail of toilet paper stuck to the bottom of your shoe.

So, we could all work on being more mindful visitors. Simple tasks like keeping garbage in a small container or bag inside the van can make stays litter-free, but of course, the poop problem is a little trickier. My boyfriend and I brought a small shovel with us on our trip through Europe and made sure our poo was buried deep enough that others wouldn’t end up stepping in it later. And we never, ever, ever left used toilet paper lying around – bring a little bag with you so you can carry it back to a trashcan.

Despite what you may have seen on social media, nothing about living out of an automobile is glamorous. If you can’t handle the inconvenience of properly disposing of your poop, then you probably won’t enjoy a lot of other aspects of van life. You won’t like the limited access to showers or constantly searching for places to fill up your water tanks. More importantly, if you don’t make cleaning up after yourself your problem, it will become somebody else’s. Van life affords the luxury of driving away from the messes you create, and in some places, the consequence of that has been to ban wild camping and free parking altogether.

I don’t want to see a day when van trips are confined to designated, paid campsites and RV parks. So please, for the love of God, remember to clean up after yourself. And before heading off on your next adventure, consider investing in a shovel.