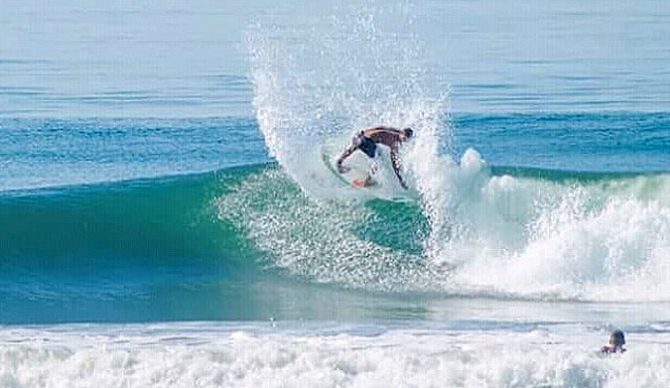 I have been surfing in Central America for about 15 years, alternating between Panama, Costa Rica, El Salvador, and Nicaragua. All of these countries offer great waves, warm water, friendly people and really good food. Over those years, I have seen the lineups get more crowded, prices go up, and the locals getting more radical to protect their once empty lineups-turned-playgrounds for traveling surfers.

Then, a few years ago, I tried something new. I decided I would try my luck in Guatemala. Not many people venture there as the more popular Central American destinations — probably because of the lack of point breaks and coastal roads, making it a much greater gamble than pulling up to Playa Negra, Colorados, or Punta Roca. I had such a great time on that trip that I just made my second visit.

Here are some takeaways from my two trips to Guatemala:

The first impression was a good one thanks to a simple four and a half-hour flight from LAX to Guatemala City. The drive from the city to the coast is about 90 minutes, having started my trip back in California at 1 am and getting in the water by 9 am the next morning.

We surfed at El Paredon. There is a hotel that is affordable and offers great food in front of one of the beach breaks. Hotel Los Pelicanos is an easy option as it offers everything a traveling surfer would want: good food, air conditioning, a view of the waves from the hotel room and some of the local surfers work there, so they are happy to help out with any guidance. The bonus is there are very few surfers. In fact, Monday through Friday, you’re more than likely going to surf alone. The locals were rad and helpful. They are more than willing to share their knowledge with travelers, realizing the kind of traveler that will come to Guatemala will be more of an explorer than your run-of-the-mill traveling surfer who backpaddles and jockeys their way through every lineup.

The waves are different every day but there are some longer rides and plenty of barrels. The currents can get gnarly on big days, but that’s par for the course in Central America anyway. It’s also worth noting you should avoid rainy season when possible because the rivers break through and water quality can get pretty poor, as most of the best waves are river mouths. In the 12-15 days I have been there, we have had about 2-3 pretty bad days, about 6-8 really good days, and a few average days. The bonus to it all is that you’re in warm water and there are no crowds, so even a mediocre day is pretty fun knowing you don’t have to worry about the clichéd balding, overweight, middle-aged dude getting agro and tallying everyone’s wave counts.

Is it worth it? Well, I came back, didn’t I? You’re not scoring Nicaragua’s offshore perfection but also you’re not bumping elbows in the lineup like you would in Costa, Nica, or El Sal. It’s a destination that should be on the radar for someone on a budget, though — much cheaper than Nicaragua and Costa Rica — and the direct flight makes for quicker travel than Central America’s more popular surf destinations. And since most people go on surf trips to surf point breaks and reefs, I’m

Most people go on surf trips to chase down point breaks and reefs, which is why I am confident that Guatemala will never get really crowded. It’s a good bet for that surfer willing to sacrifice quality for a higher wave count. But don’t get me wrong, there are absolutely epic days there. I’ve found waves there on par with some of the gems I’ve come across in Central America’s more popular surf destinations. They’re just not a daily occurrence when you’re in Guatemala. The key is getting in touch with a local surfer who’s stoked to share their knowledge and a wave or two.