Life Beyond Surf When Exploring Nicaragua 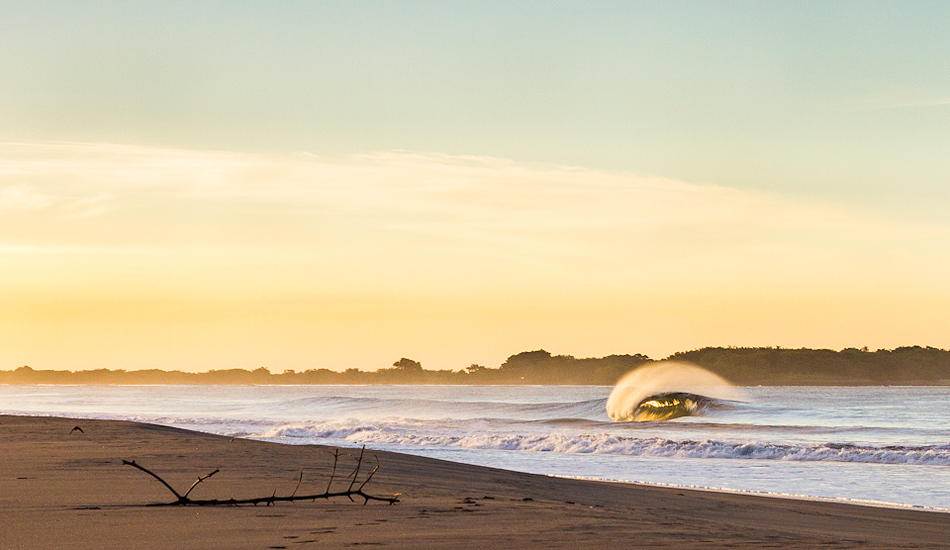 I remember the moment I realized I was in love with Nicaragua. I was watching people sit around the patio of a modest home in Balgüe, on the island of Ometepe, cheerfully playing the guitar for their Christmas celebrations. It was not just an infatuation, but a long, lasting love that would take me back to Nicaragua two more times after that, and still leave me wanting to return to see once more the places that made my heart beat.

How did I end up there? I had arrived in Balgüe on Christmas eve–just the night before. It was the most remote village on the island, so far away from all the Christmas frenzy that always put so much stress on me. Just what I needed. I had gone out for a walk on Christmas day, and soon afterwards was caught in a thunderstorm. My hostel was at least a half hour hike back, along a slippery path on the hill and through the forest. I needed to find refuge from the rain, so I just walked through someone’s gate, waved and said “Feliz Navidad” to the group of people sitting around, and gave them my best smile. In any other part of the world, I would have been thrown out and yelled at. In Nicaragua, the hosts smiled back at me and I was offered a chair. For as puzzled as they were, they quickly went back to their celebrations. I ended up joining in the fun.

Nicaragua is a poor country, but for as poor as it is, people are happy. They may not have much in terms of comforts, but they do have strong family bonds, they have deep rooted values, and they value highly whatever little they have. This poor country gave me much more than I expected.

Before visiting Nicaragua for the first time, my expectations were set quite low. The only person I knew who had been there was not too impressed with it. I didn’t know much about the country in terms of tourist attractions, I hadn’t cared to read any blog posts, any guide, or to find information about it. In my 6 months of backpacking though Central America, I never meant for this country  to be the highlight of my trip.

All I knew about Nicaragua was that it is the second poorest country in the Western Hemisphere, that it had been a dictatorship in the past and that there had been a civil war between the Sandinistas and Contra rebels. I had also read the International Court of Justice case, Nicaragua v. the United States, known as the Case Concerning Military and Paramilitary Activities in and against Nicaragua, in which the US had been found guilty of breaking its obligations under customary international law not to use force against another State, not to intervene in its affairs and not to violate its sovereignty.

I figured there wouldnt’ be too much to see in here. After all, this wasn’t Guatemala with its incredible archeological sites. And it definitely wasn’t Costa Rica, famous for its natural attractions and way more visited than Nicaragua – there must be a reason for that, right? I even thought it may be slightly unsafe for a solo female traveler, and I was really ready for the worst.

I got my first glimpse of this country when I arrived in León, straight from Honduras, after an 18 hour bus ride. It was late at night, I was tired, but the city welcomed me. I immediately went in search of food and happened at La Cancha, a small square used to play basketball, and packed with street art. The city is covered in murales like this, all in memory of the participants to the revolution.

My plan was to spend just 3 days in León but I stayed for 3 weeks. I dare say it is Nicaragua’s hotspot, not only because it is constantly hot (it was 36° Celsius in November!), but also because it is very politically and culturally active. This is where most of the revolution battles took place. This is where the most famous poet of Nicaragua, Ruben Darío, is buried. The city is full of positive energy, young people – it is home to Nicaragua’s first university – and drop dead gorgeous, in a crumbling kind of way. I had the most touching and intense experience when I visited the Museo de la Revolución. Located in what used to be the headquarters of the telecommunications company. It was taken over by the revolutionary forces and is currently run by veterans who guide visitors through the collection. My guide proudly showed the scars he got during the war.

When I arrived in Granada I saw a gorgeous city that will make any photography lover go crazy for its bright colors, its lovely cobbled streets, its elegance and its atmosphere. No wonder it is the most visited destination in the country. Conservative Granada has been a victim of the pirates and of William Walker, which repeatedly destroyed it, gaining easy access from Lake Nicaragua, on which the city is located. Yet, the city has been restored and it has preserved its character and its beauty.

It is easy to get lost in time here. All it takes is a walk around town, a visit to the Convento y Museo San Francisco, the oldest church in Central America, first built in 1585, then burnt to ground by pirates and finally by old time Nicaragua enemy William Walker. Another favourite place of mine in town is the Iglesia de la Merced, another victim of pirates and Walker. The tower is the perfect place to take incredible shots of the cathedral of Granada, of the adjacent Calle La Calzada, a pedestrian street packed with restaurants, bars and lovely shops, and of Lake Nicaragua.

Next up, hiking a volcano is a must in Nicaragua. Masaya is just a short drive from Granada, and it’s the most active volcano in Nicaragua. It smokes and erupts on a regular basis, but it is actually possible to hike up to the Santiago crater. The smoke and steam that come out of it have a funny smell from the sulfurous gases, but this is an otherwise easy hike aside from the wind. Concepción, in Ometepe, can be hiked only on a guided tour, as the vegetation is so thick, and the terrain so muddy that it’s easy to get lost.

Nicaragua is the first place in the world where people tried volcano boarding. It goes without saying that I knew I had to try it too. One hot afternoon I was picked up from my hostel in León and driven to Cerro Negro. I hiked to the top, admiring the breathtaking view all around me, enjoying the cool and strong wind (finally a break from the oppressive heat of León), all the while carrying a wooden sled. Once at the top, I wore an orange jumpsuit and goggles, and carried my sled to the edge. I made it down without breaking my neck, but I surely gathered a lot of dark dust on the way, and it took a good shower to remove all of it.

Now, I grew up in Sardinia, so I know what beautiful beaches are meant to look like. Poneloya, not far from León, is a long strip of fine sand, lined with palm trees. The sea is rough and wavy, but the chilly water gives a good break from the heat. Besides, the sunset on the Pacific ocean is simply not to be missed. Las Peñitas, not far from it, is a favorite among surfers. Indeed, together with the more popular San Juan del Sur, it is one of the best surf destinations in Central America and home to a number of surf camps. I found my lost paradise in the Corn Islands – Nicaragua’s Caribbean stronghold. I reached Little Corn Island after a trip that involved taking a flight from Managua to Great Corn island (with a layover in Bluefields) and a panga, a boat that went across the rough afternoon seas. The long trip was well worth it. Little Corn island is a tiny community of no more than 500 people, no cars (and no need for them, as it really is so tiny), splendid beaches with white sands and crystal clear waters which are perfect for snorkelling and diving, and endless possibilities to relax. I topped it off with some lovely seafood, just as a precaution.

Nicaragua kept impressing me so much, that I kept postponing crossing the border to Costa Rica. I couldn’t leave without exploring a little bit of the jungle. So I headed to Río San Juan, Central America most fought over river, which signals the border between Nicaragua and Costa Rica, and runs for 200 km from Lake Nicaragua to the Caribbean sea. I had to reach San Carlos, at the bottom the lake, and from there take a boat to Sábalos, a small town at the junction of the Río San Juan and Río Sábalos.

The river runs smooth across the jungle, wetlands and green hills. El Castillo, not far from Sábalos, is where the Spaniards built a fortress in 1675, in an attempt to stop the pirates from reaching Granada. Further down the river, San Juan del Norte is a good starting point to visit the local indigenous communities as well as Greytown, which used to be a British outpost and is now abandoned and has been swallowed by the jungle.

So, what’s so special about Nicaragua? Perhaps what I love the most is that it is not polished up for tourists. “What you see is what you get” seems to be the motto. Nicaragua has not been built or excessively developed just to attract and please tourists. It beauties are just there for everybody, and I hope that the construction of the Nicaragua Canal won’t have an effect on any of them.

Nicaragua may be rough around the edges, but has a warm heart that anybody will fall in love with. What is surprising is that with all there is to see in Nicaragua, people have hardly been talking about it and considering it as a place to travel to. I never did before, but since visiting, whenever I am asked for a tip on places to visit in Central America, or people tell me that they are going to travel in the region, I make it a point to suggest Nicaragua. It clicks all the buttons for being a perfect vacation spot.