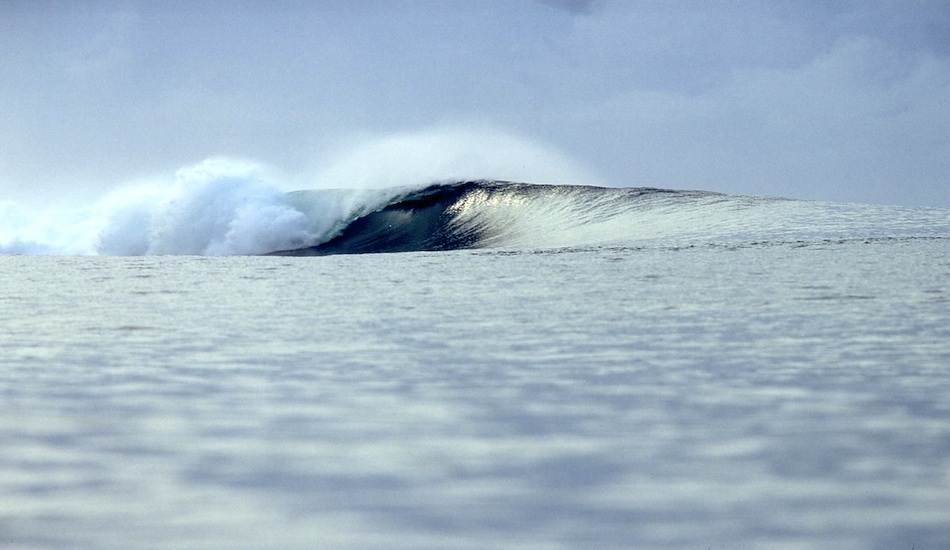 The waves have remained unchanged. 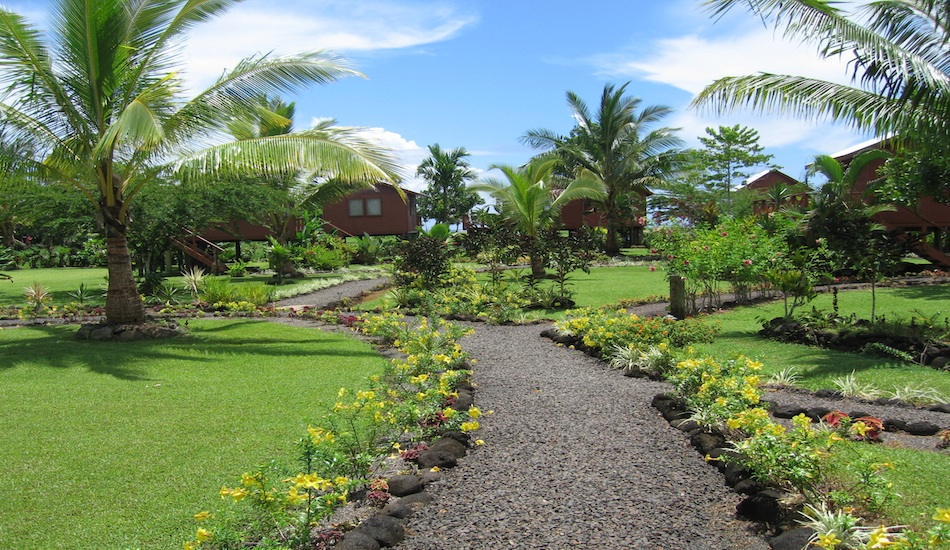 Salani Fales (bungalows) pre tsunami. The landscaping was beautiful. The eight bungalows followed the natural curve of the property, a very small peninsula poking into the river. 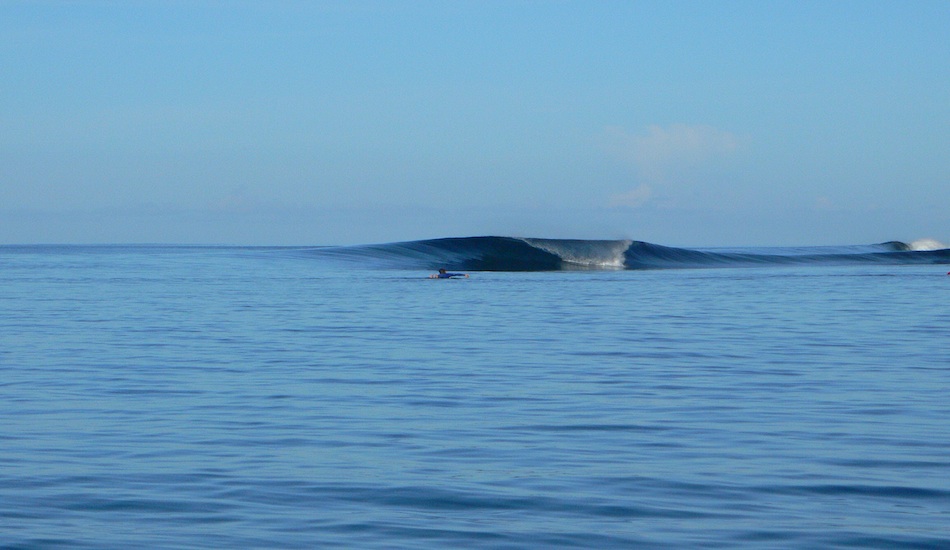 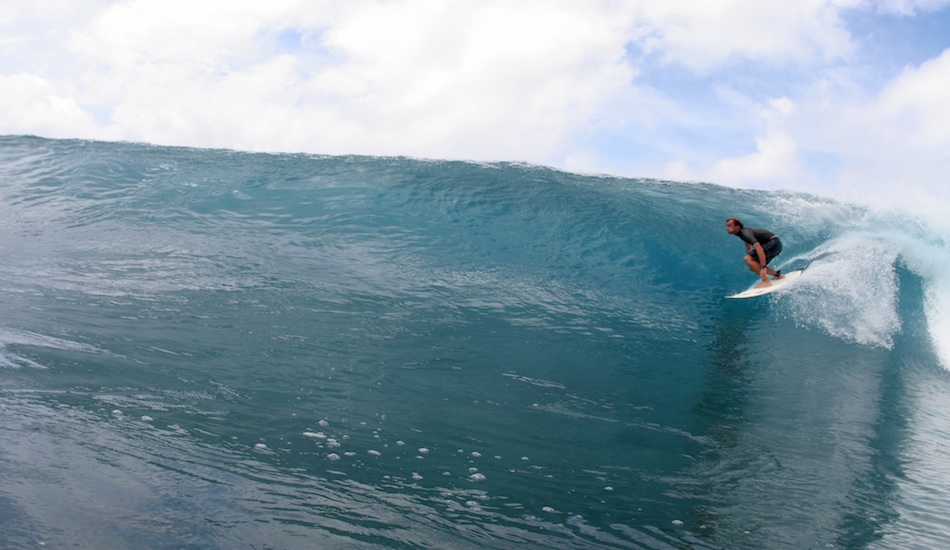 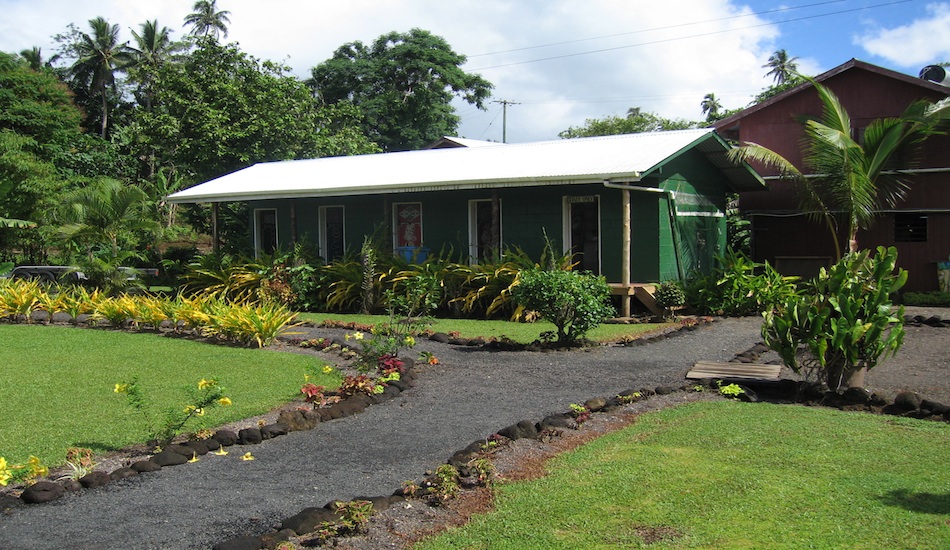 Salani was originally built with a central amenities/bathroom block with 5 private bathrooms; this simplified our plumbing issues. Notice the concrete bathroom block in the post tsunami pictures. 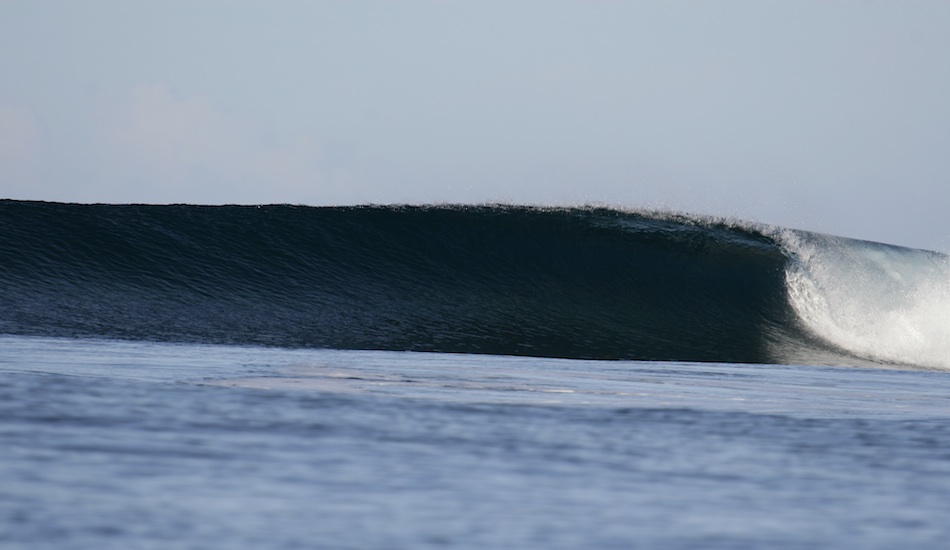 As the quake was centered closer to Tonga, Samoa did not experience any uplift or shift in the reefs; the surf is all still the same, pumping through day after day with just the few to enjoy! 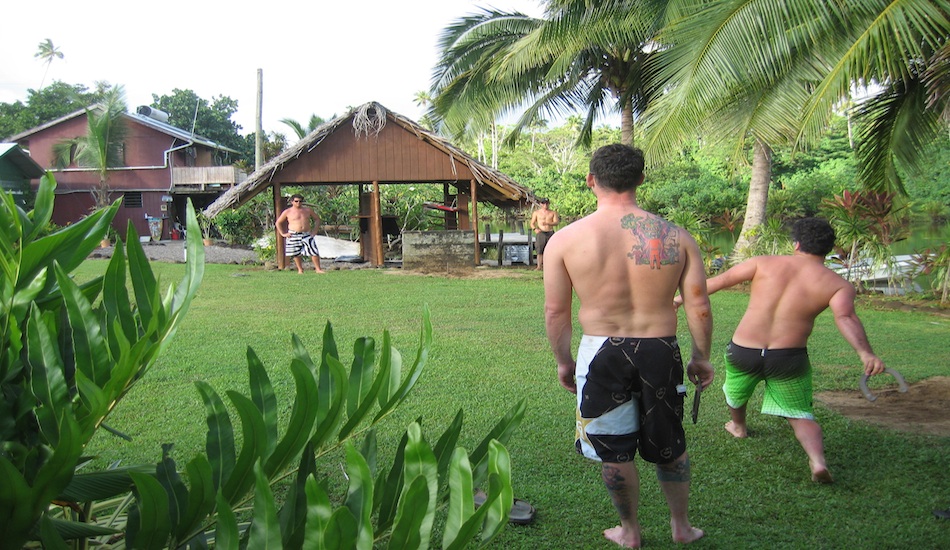 The horseshoe pits in the foreground with board racks and dock behind. The Boatman’s unit is in the very back overlooking the dock. 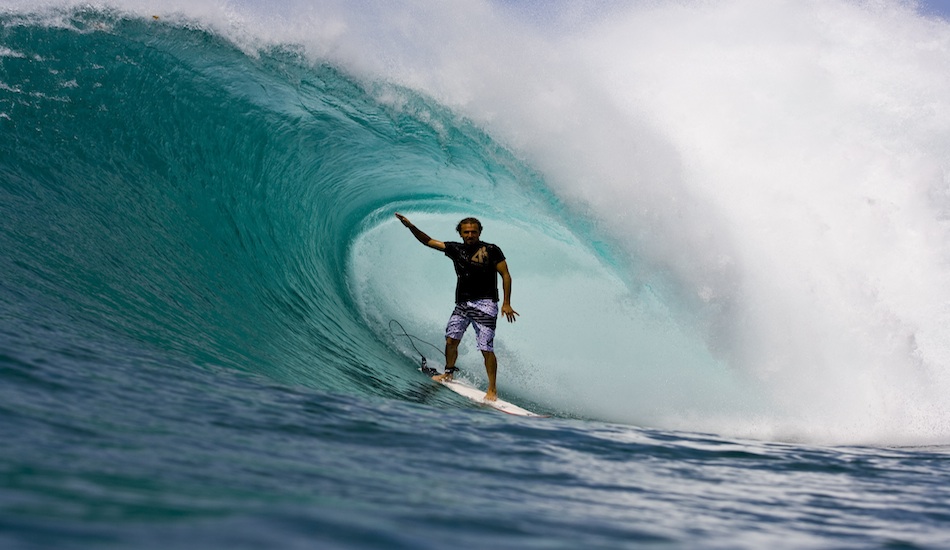 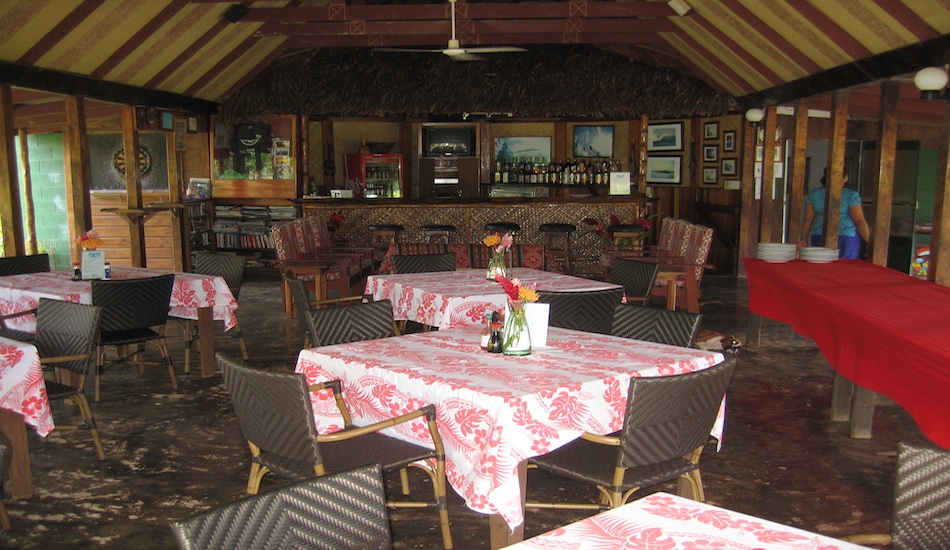 The old main fale with a simple bar. Our original bar had limited refrigeration and no running water –yet still very enjoyable. 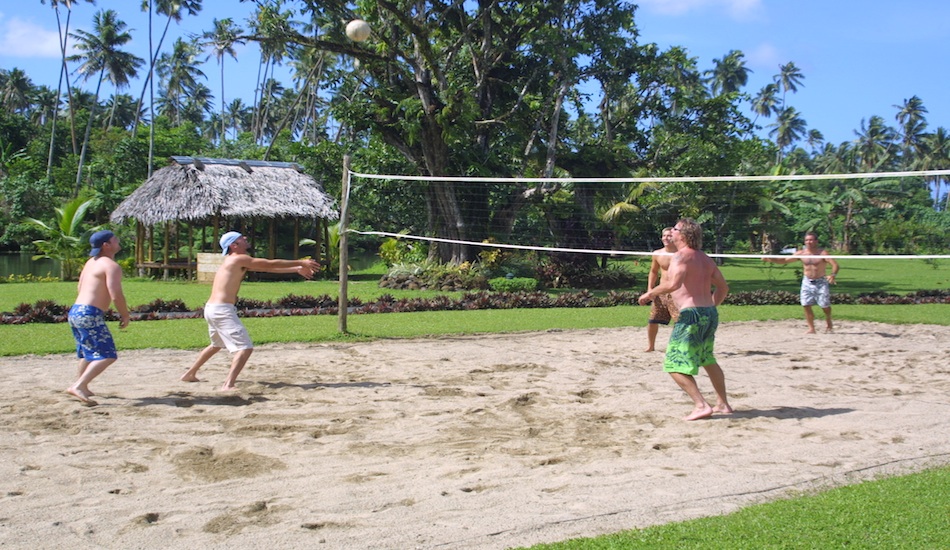 Evening volleyball competitions with guests and staff were always popular. 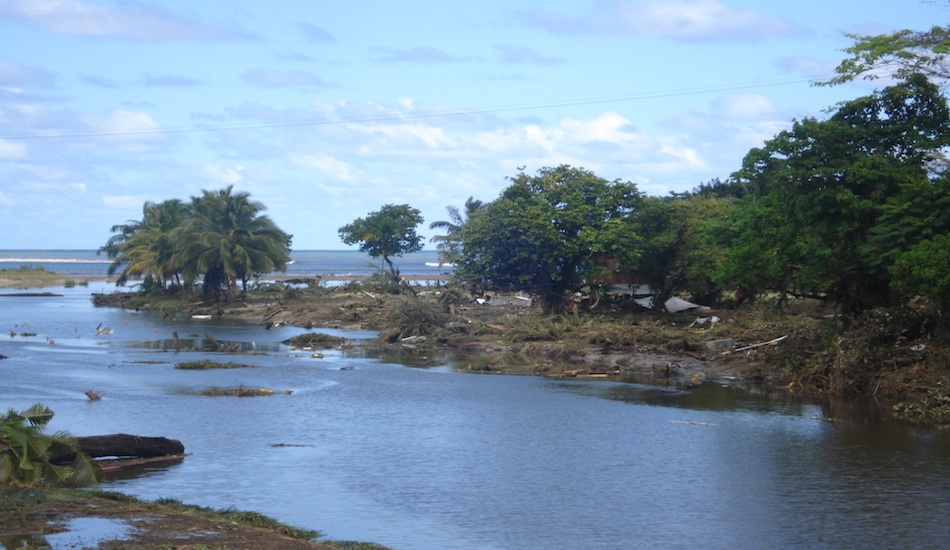 View from across and upriver taken by a boatman looking for his surfboards. You can see there is no sign of any fales, dock, bathroom block or boatman’s units. The only building remaining was the Managers Unit which was knocked off its foundation. 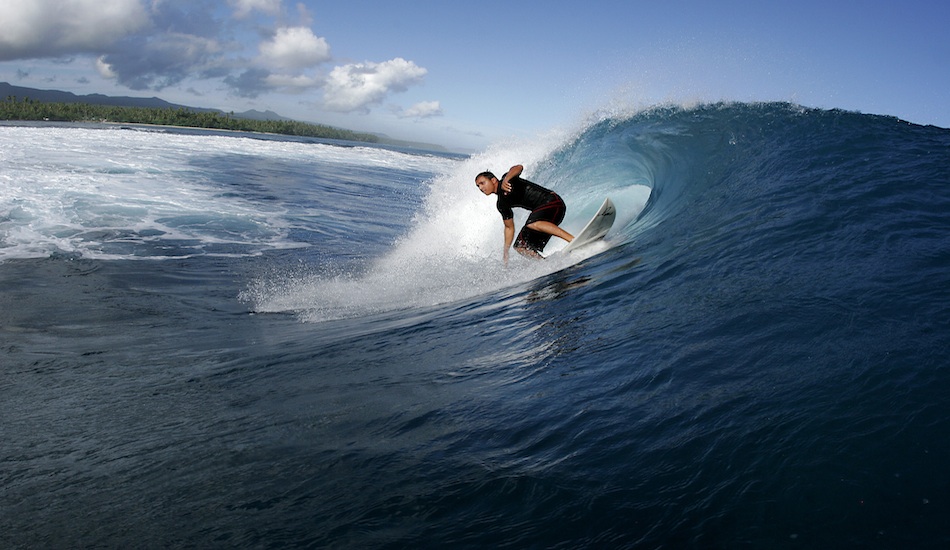 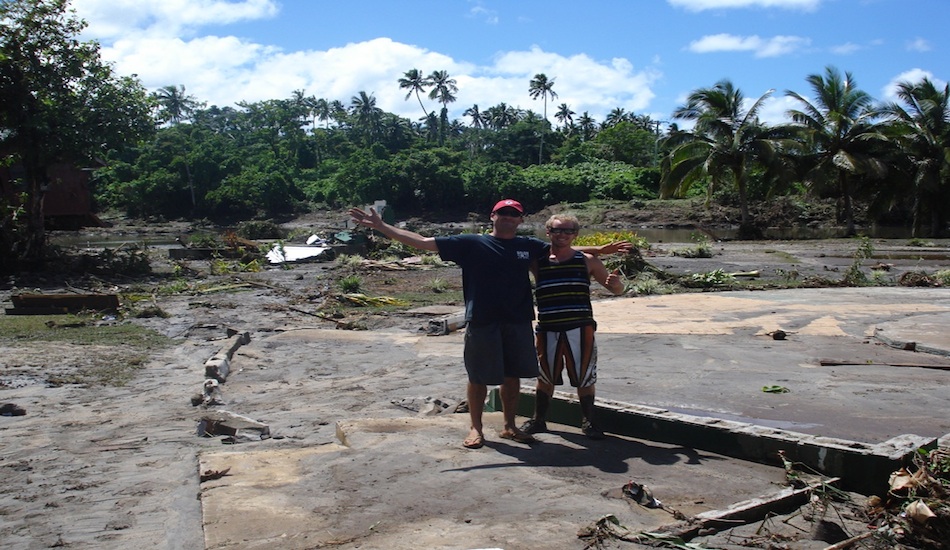 You can see the large oval cement pad which was the foundation for the old Main Fale. The area these gents stand was housekeeping with the kitchen behind. This portion of the building was constructed from reinforced concrete block. You can see just a small bit of the remaining green wall from the old bathroom block in the background. 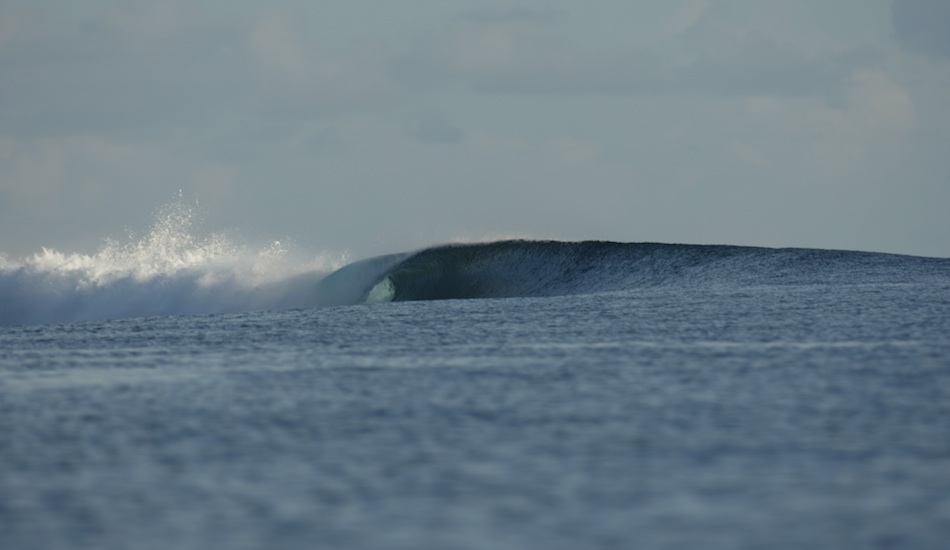 This was the main dining area looking back toward the bungalows shown in image #1. 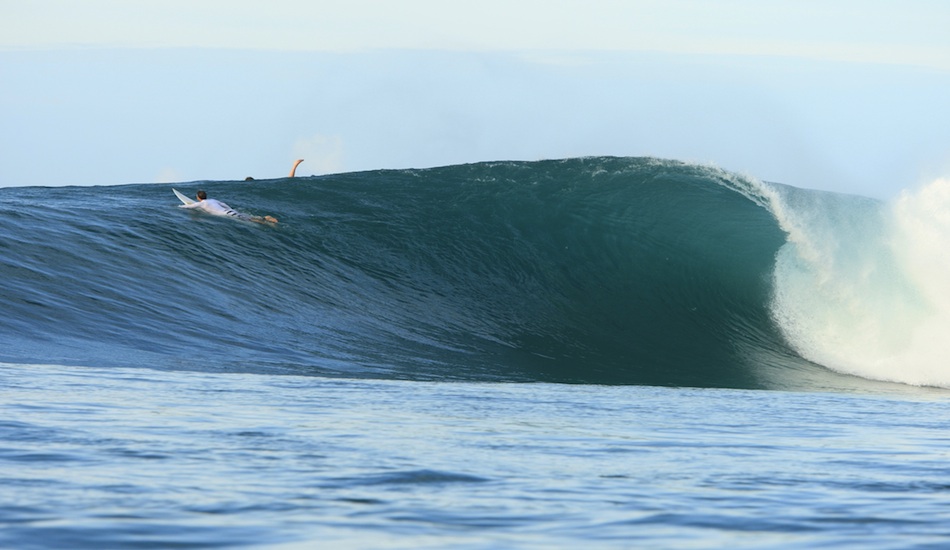 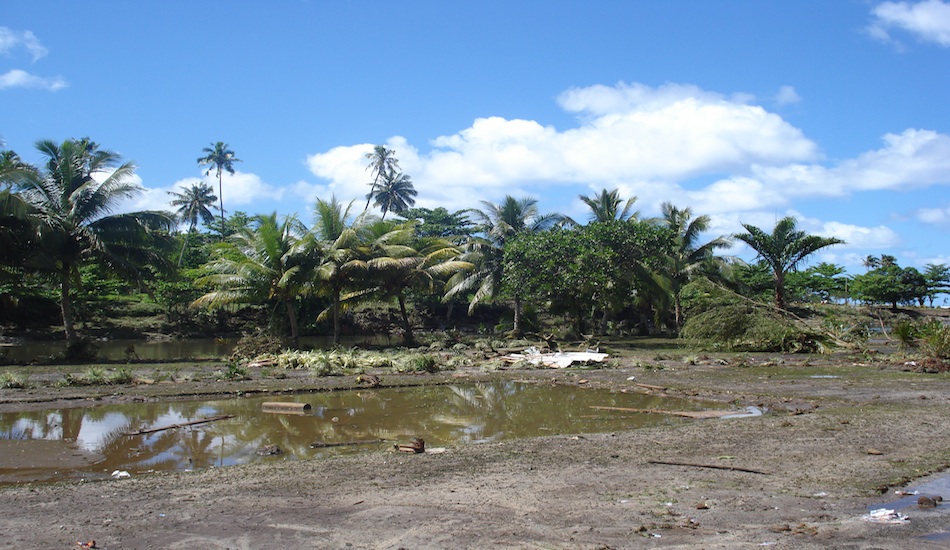 A wide angle shot of the property, nothing remains. 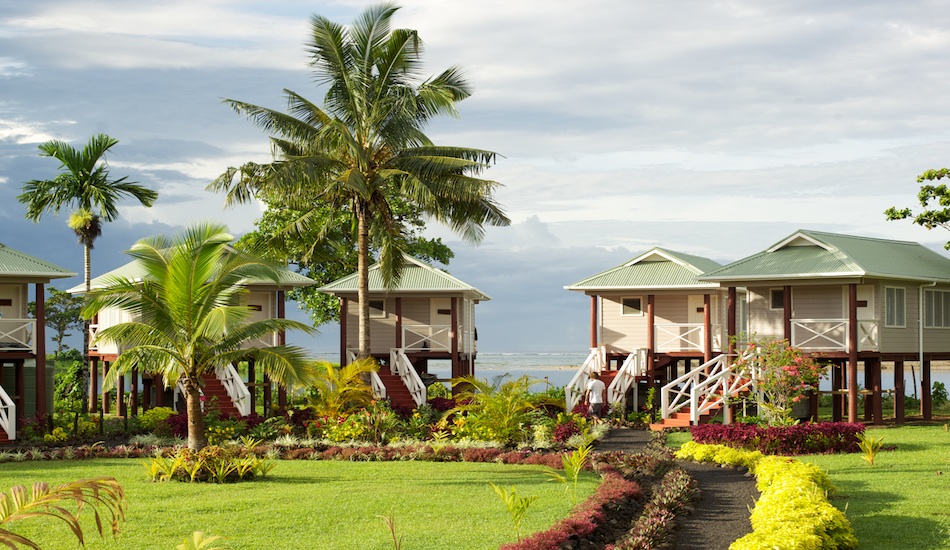 The new, improved bungalows. You will notice the similarities with the old layout and design, just better in so many ways. 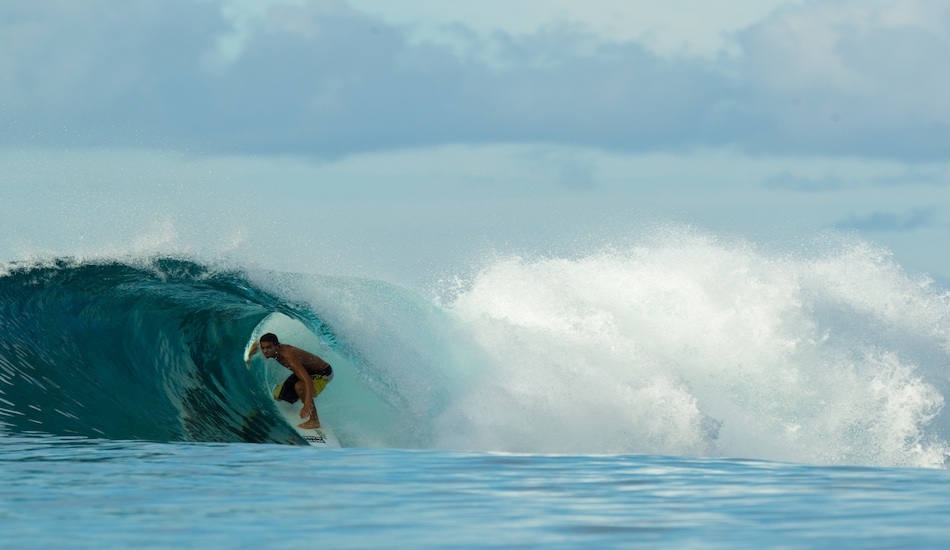 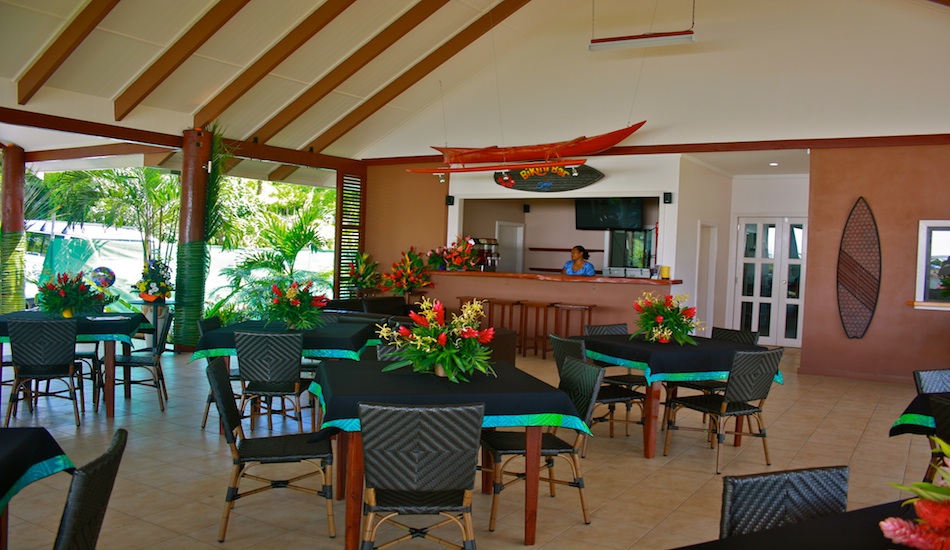 The new main fale, dining area and bar. The upgrades include proper roof construction so you no longer have gecko’s or bits of old matt falling from the ceiling onto your table while dining. 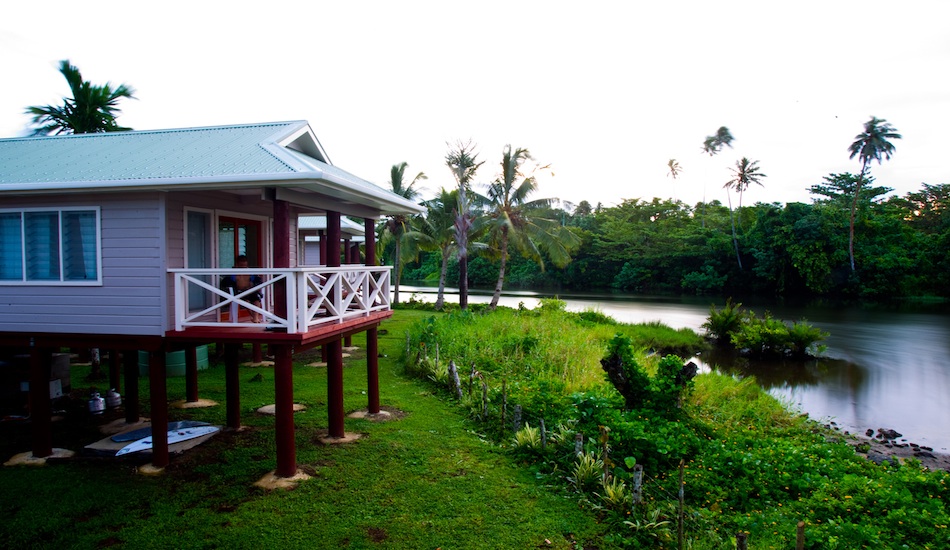 Deck side of the new bungalows facing out onto the river. So tranquil! 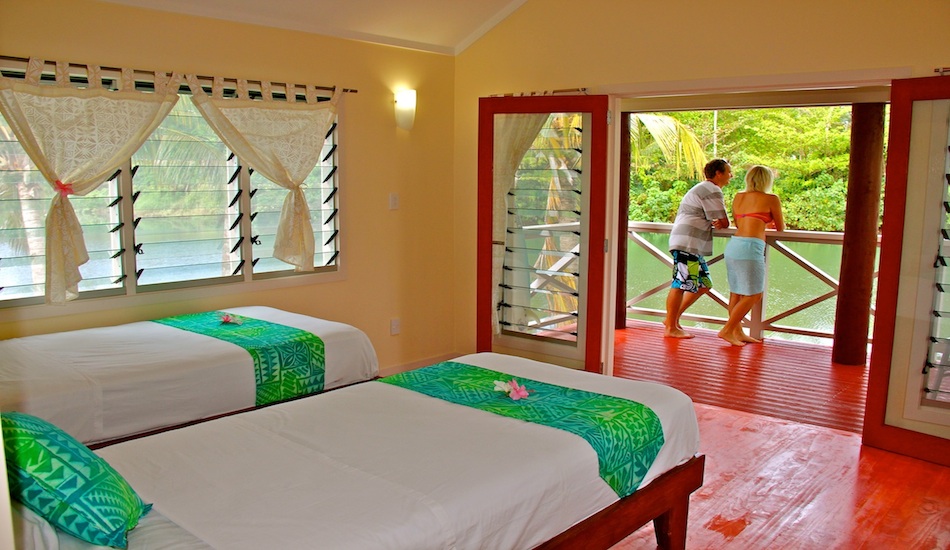 Interior of new bungalows – still basic, but very clean and comfortable. No more walking to the bathroom block in the middle of the night, or pissing off the deck – that’s right, we know you did. 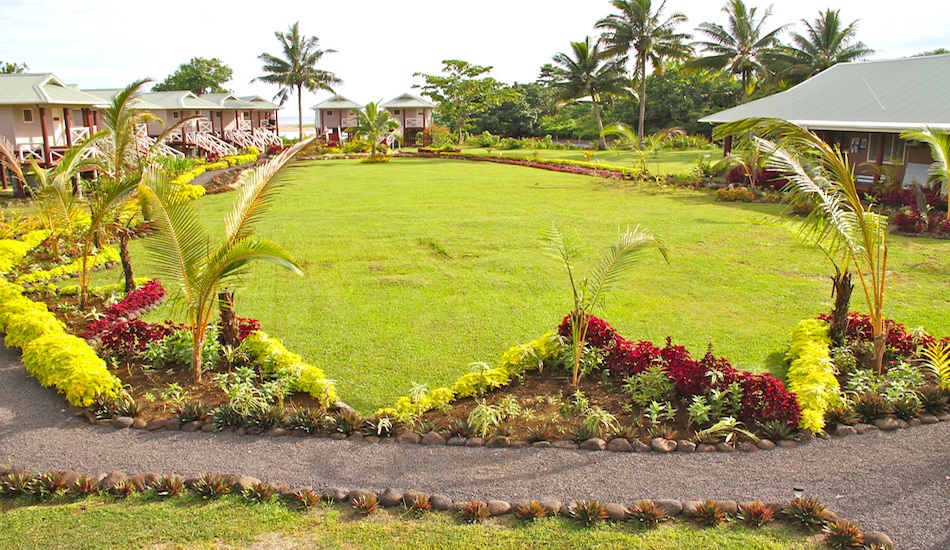 A wide angle shot of the resort; bungalows along the river edge, no more volleyball court but hopefully a pool someday soon, and the main fale on the right. 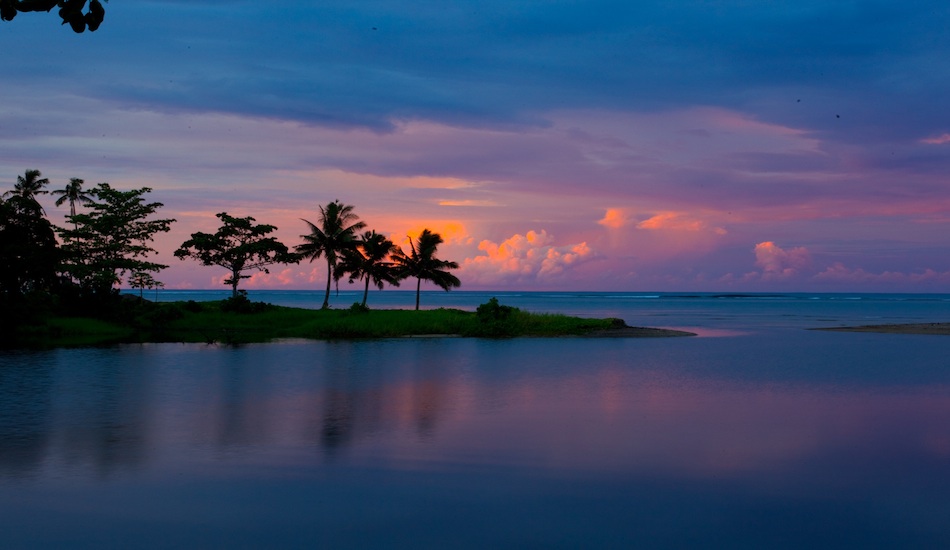 The view from the deck on your fale. Noting like it. Enjoying the evening, pondering the days events and what tomorrow may hold – laughing and singing coming from nearby Salani Village.

In September 2009, Samoa was struck by a powerful Tsunami killing dozens of people and destroying much of the small developments and villages along the South East portion of the island of Upolu, including Salani Surf Resort.

We first built Salani Surf Resort in 1998, and we quickly learned that this sort of project in such a remote and underdeveloped portion of the world was not simple. After years of perseverance with a variety of challenges, Salani Surf Resort managed to become a sanctuary for people looking to enjoy rich Polynesian culture and surf from its simple, comfortable surroundings.

Around 2007 ownership changed hands and the mission of running and enjoying Salani was transferred over to Chis Donato and shortly thereafter his beautiful Samoan wife Shannon. Chris and Shannon along the Australian/Irish managers Nick and Triona held strong to the mission of having guests enjoy Samoan hospitality and culture. Salani was and never will be a resort with big walls creating a divider to the outside environment.

Unfortunately, in September of 2009 an earthquake in the Tongan Trench generated a massive tsunami which slammed the SE corner of Upolu, Samoa. Salani Surf Resort was completely destroyed, nothing remained. Thanks to the quick actions of Nick and Triona, both the resort and local village were evacuated with only minutes to spare – Salani village was the only village along this area of coast that had no loss of life; Nick and Triona Shannon are true heroes.

After much deliberation and number crunching, Chis and Shannon decided they wanted to rebuild Salani; as much for them as the staff and local village that had become family over the past 11 years. Over a two year period Salani was rebuilt with the same bone structure but with a much nicer body. The new bungalows are nicer, larger – each with private bathrooms (biggest upgrade) and the main Fale (bungalow) is also larger and stronger with a westernized infrastructure including professional kitchen, bar and housekeeping facilities.

So the labor of love continues. Love for Samoa, the people, the families, the culture, the surf; but most of all the enjoyment of sitting on the deck with an ice cold beer looking at the reflection on the river and listening to the sounds as the sun sets.