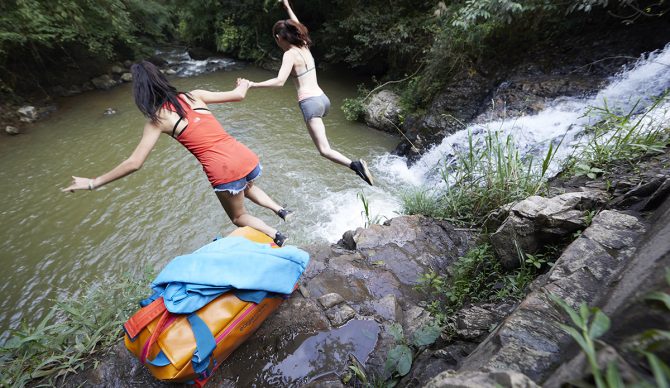 Editor’s Note: This feature was made possible by our friends at Eagle Creek.

If you could quit your job tomorrow and travel anywhere in the world, where would you go? There’s a lot of actual data that suggests a lot of people wouldn’t know how to answer that question honestly.

Somehow, more than 700 million vacation days go unused by American workers each year. This is in spite of the fact that traveling — probably the top itinerary item of extended vacations and sabbaticals — is statistically proven to make us more productive workers, make us more creative and cognitively flexible, boosts our immune system, and we’re even twice as likely to get a raise when we actually use those vacation days. So it’s fair to assume Americans don’t seriously ponder the question of where they’d go because well, not enough of us actually go anywhere.

For everybody preparing their list of excuses and reasons why quitting their job entirely or just getting away for a real vacation isn’t possible, Eagle Creek, an outdoor brand that specializes in high-quality travel gear, is doing their best to make some cave into the urge. On March 28, they’re launching the “Quit Your Job” campaign, making eight stops over the next four months to find five people they’ll give a dream trip to. Whether or not you actually quit your job in the process is up to you.

What’s more, they’ve even created a legitimate “Quit Your Job” kit for people that are still on the fence and need some of the other leg work done for them. You know, like the part where you tell your boss, au revoir. Or adios. Or ciao. You get the picture. According to their data, 43 percent of millennials today plan to quit their job within the next two years. So they created a resignation letter for anybody ready to burn the ship and not look back and out of office email replies for the people who are just looking for a breather. But the real kicker is their power point presentation designed to convince bosses to not only let an employee quit their job gracefully, but also plant the seed for taking that job right back once their extended trip is wrapped up. Always leave the door open.

If you can pull off that last one, you absolutely should. Here’s the four-step process of making it happen:

1. Go to one of the eight Eagle Creek “Quit Your Job” tour locations and dates listed below.
2. Be prepared to answer that burning existential question on camera: If you could quit your job tomorrow and travel anywhere in the world, where would you go and why?
3. Win! If you’re picked, Eagle Creek will organize the entire trip and supply the gear to get there (and to keep). A panel of experts will choose the winners.
4. Figure out whether you’re going to sign that resignation letter, prepare a clever out of office reply, or execute a legendary power point presentation that ends with you being granted freedom to travel the world and come back to that comfy paycheck when you’re ready.

Note: Trips depart six to eight weeks after winners are announced. The first winner will be announced by mid-April, with rolling winners through August. Learn more about the Quit Your Job campaign online here.