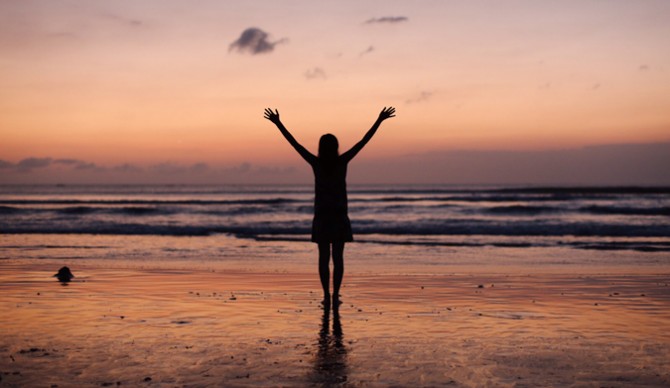 This is what life is all about.

“I don’t surf,” I told a group of other backpackers I had met at the airport in Doha, during my layover on the way to Bali, Indonesia. Our flight to Denpasar had just been delayed so we made the most of our time chatting and sharing our travel plans.

They stared at me in disbelief. “You don’t? Then, why are you going to Bali?”

That was a good question, and I was unsure how to answer. The thing is, I hardly need a reason to travel. I do have my preferences when it comes to destinations but hey, everybody wants to go to Bali, right? So I thought I’d go too.

I knew from friends who had been there before that Bali is a surfers’ paradise. They keep going back, and to say it in their own words, “Surfing in Bali is as good as it gets. With the best, most consistent waves anybody could wish for.” That was the extent of my knowledge about this small (and gorgeous, as I was about to find out) island went.

I had not even read Eat, Pray, Love (or watched the movie, for that matter). I will say that I wanted to have as little expectations as possible, but the reality is that this was perhaps the most spontaneous and unorganized trip I have done in a long time. I had been toying with the idea of traveling to Indonesia one weekend, I got a ticket on Monday, and I left on Thursday. Bali had seemed like a good option. Rumors had it that it was one of the best places to visit in Indonesia and that it was fairly cheap there. Just what I was looking for. But I hadn’t done any reading at all. My plan was to just have a good time. I would not spend my time surfing in Bali and I had a very basic idea on what to see and do there.

So I simply and honestly said “I don’t know yet, I guess I will figure it out soon enough.”

I was going to let Bali surprise me. And it surely did, in many ways (positive, as well as negative). As soon as I stepped out of Denpasar airport and sat on the bus that would take me to my hotel in Kuta, I stared in total disbelief at the chaos that spread in front of my eyes. A proper traffic jam, Asia style. Buses unable to proceed, scooters zipping through traffic, drivers pressing their horns in the hope this would get things moving. It was amusing in a way. I just didn’t expect Bali to be completely congested. I knew there and then that I wouldn’t fall in love with Bali so easily — not because of Bali, but because of the way I am.

Next on, I realized that Bali (at least the part of Bali where I stayed during my first few days on the island) looked like a gigantic shopping mall. Street after street packed with chain stores, western style restaurants and coffee shops: I had no idea what to expect from Bali before getting there, but surely this didn’t match my non-expectations. Where had all the Balinese traditions gone? Where were the lovely markets, the haggling, the crafts, the traditional fabrics? Besides, wasn’t Bali supposed to be all peaceful and silent?

Just when I thought I would simply have to get used to the traffic and the noise, to the commercial streets packed with stores and restaurants, and I worried that Bali had lost its traditions and identity for the sake of western (mass) tourism, I ended up in Ulu Watu. I must admit it was a nightmare to get there from Kuta Beach. So painful it was to get through that traffic that several times I cursed myself for deciding to go. It was not a good introduction.

However, Ulu Watu was worth every effort, every traffic jam, every driver cursing at the others to hurry up. The temple was fantastic, the naughty monkeys that live there entertaining (although they tried to steal my sunglasses); but what I enjoyed the most was the breathtaking view of the coast and the ocean. I was lucky enough to get there just in time for sunset, and I spent a good hour in silence, completely captured by the many fishing boats that, as the sun was setting, made their way back sailing across the ocean. 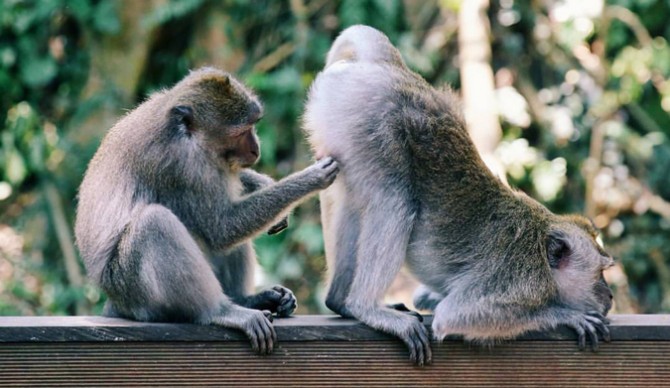 And just because Bali loves contradicting itself and decided to feed our rollercoaster relationship, I had a good fix of Balinese culture and traditions during the Kecak show at the open air theatre in Ulu Watu. During the Ramayana Monkey Chant (a show that depicts a battle from the Ramayana Hindu poem) a group of 150 men wearing a checked cloth around their waists, percussively chant “cak” and move their hands and arms. The rhythmic chanting, the slow motion of the dance, the atmosphere almost sent me in a state of trance.

As I returned to Kuta and headed to Jimbaran for dinner. I wanted to see what was so special about having dinner at the beach. I guess the rest of the tourists that day had my very same idea, as Jimbaran was packed. Restaurant after restaurant had placed tables on the sand and large groups of people – locals as well as travelers – waited for their meal, chatting the night away, drinking, and laughing. Once again, I was in crowded Bali. But then, as the light breeze swept my face and the waves crushed loudly on the shore, I couldn’t hear the noise and chatter anymore. It was just me and the ocean. Me and Bali. 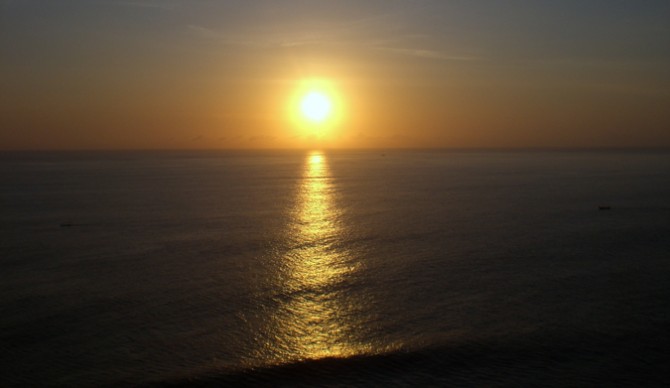 Yet, having dinner by the ocean had not completely fixed my relationship with Bali. One minute I would hate it, and thought I had made a huge mistake in going. The next I thought there was no better place on earth.

I thought having a try at the activities Kuta is famous for may do me some good. Fair enough, Kuta is a paradise for surfers but since I have yet to learn how to surf (forgive me for that) I opted for other water sports. I had a try at paragliding and at banana boat, and got my adrenaline fix. It was a lot of fun.

I hung out at the beach long enough to see one more side of Kuta. The side that meant I had to have my face towards the sun setting on the horizon. The side that made Kuta Beach glow under a special light. It was gorgeous, I admit it. It was romantic. Perhaps I had been too rushed in my judgements.

Joining another group of tourists, that night I headed to the Potato Beach Club. I partied the night away, I enjoyed a drink too many and walked along the beach. And I decided it was time to leave Kuta.

Because, for as much as I tried loving it, Kuta frustrated me. It was crowded, it was dirty, it was too commercial and too much in my face. I needed to get somewhere quiet, where the pleasures of comfortable tourism were not so obvious and where I could relax in a different way. And where I could finally fall in love with Bali.

Would Ubud, the cultural centre of Bali, fix this rollercoaster relationship once and for all? Would the love for Bali finally creep in my confused heart? I was not so optimistic, but I was willing to try.

As the taxi pulled over in front of my hotel in Bedulu (a village not far from Ubud) I started to relax. A gorgeous, lush garden and a small infinity pool were all promises of a good time. I felt I had finally found what I was looking for. Enjoying a cup of Java coffee in the solitude of my beautiful room, facing a forest and listening to the sound of the creek below and the cicadas serenading, I resolved to make the most of the rest of my time in the island, to relax and to visit as many places as I could in the next few days.

The first stop on my road to relaxation was at one of the many massage shops in Ubud. For a splurge, I spoiled myself with a complete body massage and downed a few freshly squeezed juices, just to feel less guilty about indulging in alcohol in Kuta.

Feeling as if a heavy weight had been lifted off my shoulders, I then walked through the Monkey Forest, admiring the cute and cheeky animals as they played and put up a show for the visitors and determined not to let any monkey steal anything from me.

I then rented a bike to go explore the rice paddies on my own and get to the most rural areas. There they stood. Bright green patches where only a few farmers worked and silence was deafening. And more than that, I discovered that if only I looked a little bit closer, rice paddies were all around – backyards, restaurants and hotels all had a rice field instead of a garden, and it was just so unique… so, so Bali!

I gorged on food. I tried all the local specialties. I experimented the incredible food scene of Ubud – traditional Balinese cuisine, raw vegan restaurants, western style restaurants, street food, local fruits. I stuffed myself with flavors. And still insatiable, I went a step further and participated in a cooking class. Picking the ingredients at the local market, under the instruction of a local family, I prepared a Balinese meal from scratch. And I happily ate it.

Speaking of markets, it was also time to test my haggling skills. Leaving the high street shops and beautiful boutiques behind me, I headed straight for Ubud market, which proved to be a good testing ground. I successfully haggled my way through some fantastic, colorful fabrics and the unmissable (sigh!) souvenirs. Just because I knew I could.

I visited the Elephant Cave, a sanctuary accessed through a door that looks like the huge mouth of a demon, carved in stone. It was beautiful, it was peaceful.

I finally got it. That was the Bali I had been looking forward to all along, even if I had not known it. That’s the Bali I fell in love with. That’s the Bali I would want to return to. And if anybody asks me again what would I do in Bali if I didn’t surf (although, watch this space: I am going to learn very soon), I would have plenty to say in response.

Bali captivated me and frustrated me, all at the same time. The minute I thought I got it, I understood it, Bali changed the cards on the table, contradicted itself and surprised me all over again. I found an array of things to do in Bali that didn’t know was possible in such a small island. I reluctantly fell in love with it. It left its mark on me and I won’t ever be able to forget it.