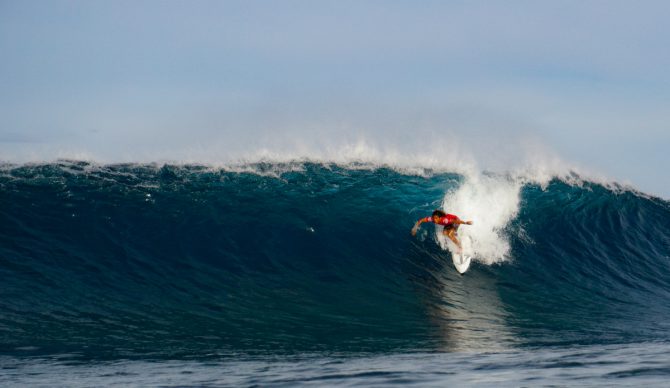 Marama Tokong ready to get barreled during the finals. Photo by Tim Hain.

The 20th Siargao National Surfing Cup kicked off with barrels upon barrels and several broken boards, setting the tone for four days of action that culminated with two hometown heroes meeting in Cloud 9 perfection. Conditions were nearly perfect through most of the competition as solid head high surf gave almost 100 competitors from over 10 different regions a chance to nab a piece of the ₱323,000 total prize purse. And in an effort to boost the Philippines to the forefront of surfing excellence, an 18-and-under Juniors Category has been added to this year’s Philippine Surfing Championship Tour (PSCT).

Day one started off with 16 heats and plenty of stand-up barrels. Siargao’s Alvin Coldura showed off his local knowledge by scoring the highest single wave score of 8.50 and a total heat score of 15.50 to move into the next round.

Up-and-coming competitors from the Juniors Category were just as comfortable, paddling out into the fast, powerful waves that Cloud 9 is known for. At just 13-years old, Jaynard Alciso wowed the crowd and received the highest total heat score of 9.25 in Round one for the Juniors. Reigning shortboard champion, Philmar Alipayo faced other top-ranked surfers later that day and again earned his right to advance to the next round.

In the end, it was the Philippines’ top-ranking surfers who made it through to finals day with Open champion Philmar Alipayo, Siargao’s Piso Alcala, Baler’s Neil Sanchez, Siargao’s John Mark Tokong, and La Union’s Jay-R Esquivel looking to claim the top prize in the first leg of the tour. 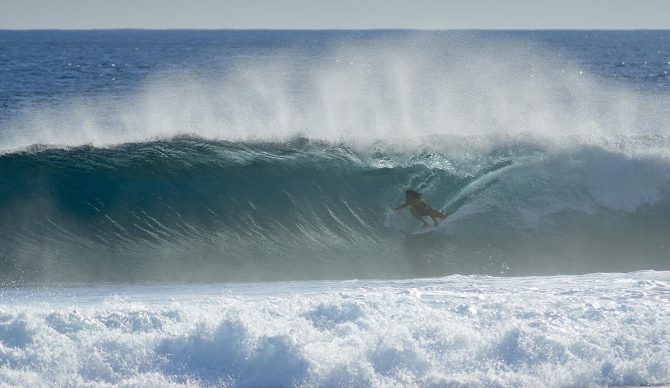 However, local knowledge and experience proved to be the edge again as Tokong and Alcala, both from Siargao, would move on to face each other for the final heat to claim the 20th Siargao National Surfing Cup Men’s Shortboard Open Champion. Tokong, who stayed consistent as the scoring leader throughout the entire competition finished off strong with a total heat score of  19.20, including a 9.75 on one wave, the highest wave score in the whole competition earning himself the win.

“I’ve really been training hard, especially if I know there’s a competition. I want to get better and better,” Tokong said. “I also want to be a good role model for the kids here. They’re the future—the future of surfing and the future of Siargao” The Juniors Division final heat comprised of Gabriel Lerog, Benjomar Canon, Noah Arkfield, and Marino Figuron with Canon claiming the first ever Siargao National Surfing Cup Juniors Division Champion with a total heat score of 11.75.

As Cloud 9 continues to gain popularity and a noticeable increase of surfers and tourists from all over the world visit, it’s critical for its wildlife and natural resources to be preserved as much as possible. For the first time, single-use plastic was banned throughout the whole competition in an effort to help bring more awareness to the issues of plastic pollution. PSCT Contest Director Joseph Olin said, “We’re honored to be supported by the local government of General Luna and the Philippine National Police in enforcing this policy, not just to the organizers and participants but to the general public as well. We hope that other surfing destinations in the country follow our example  to preserve and protect our natural resources.”

You can find more highlights of the 20th Siargao National Surfing Cup on their Facebook page, here.