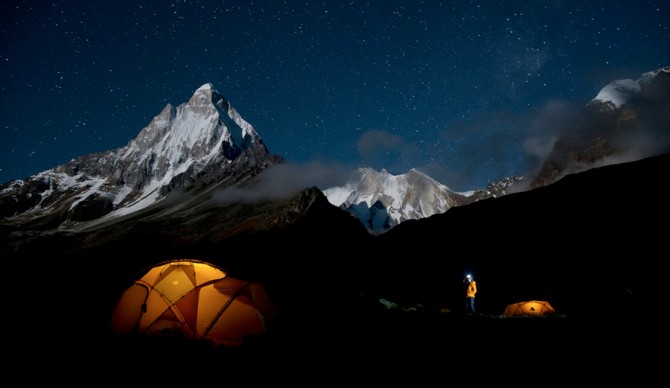 There should be strict criteria one has to meet to be able to review a documentary film such as Meru. I don’t meet it. However, neither do any other of the countless critics that have weighed in and given their critique on the film. In fact, there may only be a handful of people in the world who have the mountaineering know-how and the film crafting savvy to be able to pass judgment on a film like Meru. (Cedar Wright, who I recently interviewed, is probably one of these select few.) That said, I’m going to go ahead and do just that and review the most talked about mountaineering film since Everest premiered on IMAX in 1998.

The film has received largely favorable reviews: 92% Rotten and a 7.9 out of 10 IMDB. But there seems to be an overwhelming misreading of the film’s overall purpose. Certain mainstream reviews complain about the “underwhelming” final summit approach; others voice their discontent with the lack of conversation around the philosophical quandaries behind the attempt at a first ascent of the 20,000-foot Himalayan peak.

The thing is, plenty of films in this adventure sports genre have played up the drama and risk. It’s an industry/Hollywood staple, particularly for the execs and suits on the outside looking in. And while Meru comes close to this type of over-the-top flair, it avoids falling into the pitfall of its flashier contemporaries.

To begin, filmmakers did not use extravagant camera setups to heighten the stakes when capturing relatively mundane footage. Instead, they show the action through more reasonable means, doing their best to portray the action as it was experienced — climbing doesn’t have the speed of flying down a mountain on a board or zipped into a wingsuit, and Himalayan big wall climbing is particularly slow. As a result, Meru is intended for those of us who can relate to the moments when one move makes the difference between soaring successfully into the unknown or sustaining serious, potentially fatal, injury — and for those who are familiar with the pace of the climb, the film is all the more cringeworthy and exhilarating.

Meru, crafted by Jimmy Chin and his wife Elizabeth Chai Vasarhelyi with additional filming by the film’s underdog hero Renan Ozturk, is more about what doesn’t happen than the incredible things that do. At no point does the value of what the climbers are doing come into question, and this alone separates Meru from the litany of other adventure documentaries that lament over the trepidations and personal conflicts that the subjects have to face as they undertake their quest to do the unknown in front of the camera. Meru is representative of the increasingly widespread appreciation of the simple fact that climbers will climb: they will sleep in cars, caves, and bivouacked to the side of 5,000-foot cliffs if that is what it takes.

The story is not about so much about morality and practicality — though questions relating to these will always arise as they do throughout the film — as it is about the journey. 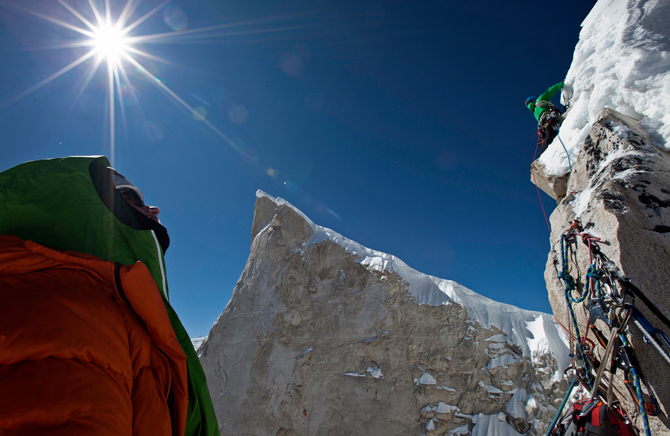 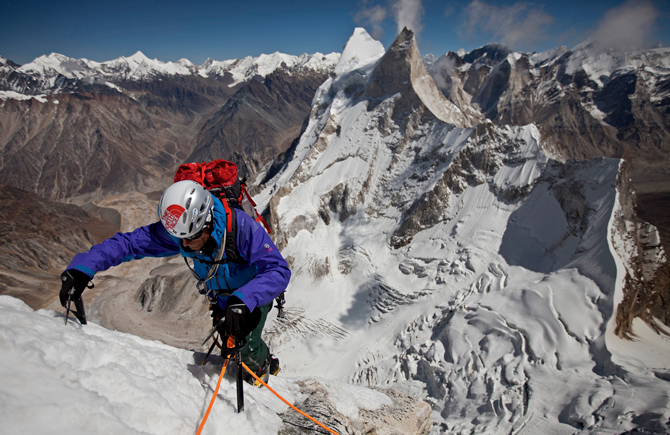 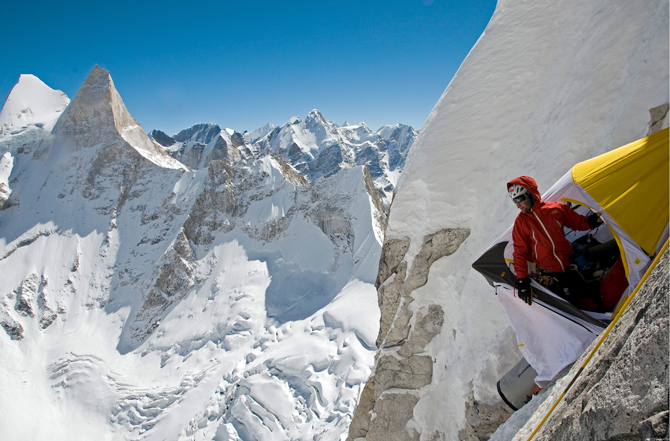 Despite not participating in the conquering of Meru, famed climber and scribe John Krakauer appears as an omnipotent interpreter and voice of reason, playing a pivotal role in the film coming to life. It is Krakauer’s commentary that creates a sense of urgency and purpose in the climb; at the same time, he acknowledges the unreasonable task at hand and agrees with the majority of audience members that this, along with many ventures of a similar nature, lacks any logical explanation, but if successful, the experience will trump logic every time.

The story of the mountain climb has always served as the perfect metaphor for the trials and tribulations of life. Meru is all about getting to the forefront of the human experience, the hang-ups along the way are really just introspective moments of questioning as to whether this current path is truly the right way to get there. With plenty ups and downs (in the most literal sense) and failures and accomplishments, Meru does not relish in this reality but goes on as the climbers do, forward through the setbacks. 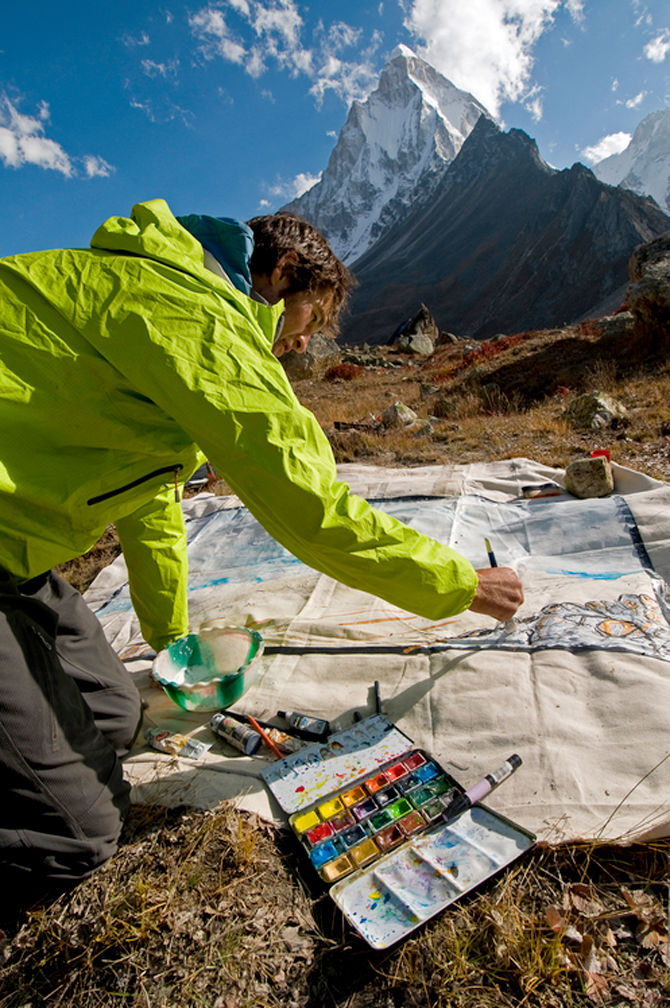 Most importantly, the film does not make a puff-piece of the subjects in their personal lives. Two thirds of the films’ cast drops off the map for months during production of the film. One due to injury. another caught up with the aforementioned introspection. The filmmakers acknowledge Anker’s made-for-Hollywood life with his marriage to Jennifer Lowe-Anker, who was first married to prolific climber (and Anker’s mentor and climbing partner)Alex Lowe. It doesn’t attempt to cover up Jimmy Chin’s abandonment of his work commitments following a stint of near fatal mishaps while filming in Jackson Hole. And it even has Ozturk’s girlfriend on the record telling the world that the severely wounded climber absconded to India for the next attempted ascent without so much as a goodbye text.

It’s a tried-and-true documentary: everyone on the screen is as they appear, flawed but determined, smart yet ignorant in all the right ways. In the end, Meru will make you question how you spend your days. In spite of the suffering the triumvirate endures throughout the film it is clear that they are living on the preferred edge of life. It is not a film on how to climb nor is it a film on how to persevere through controversy. It is a film on how to live. The answer? Comfortably, right next to death. 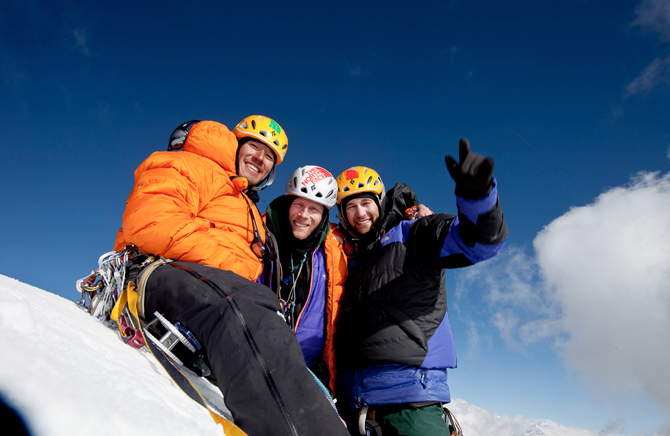 For more on Meru, head on over to the website.