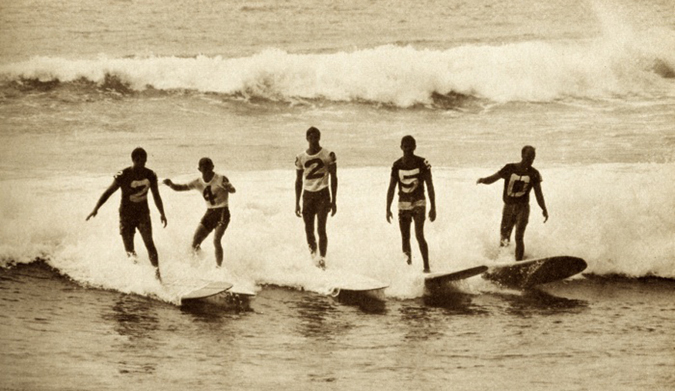 “While the camaraderie and spirit were rich, there was very little in the way of monetary compensation from endorsements, and certainly no prize money. The rewards were personal achievement, and in line with all amateur sport of the era, time at the top was limited.” -Association of Surfing Professionals

At first, professional surfing was a crazy concept. Depending on who you ask, it still is. The idea of getting paid to surf competitions was an afterthought. It was a time of true amateurism, and those who were in it were in it purely because they loved it. Before the idea of being paid to play manifested, the Makaha Invitational catalyzed organized, competitive surfing as we know it.

Originally, The Makaha Invitaitonal, then known as the unofficial world championships, ran from 1954 to 1971 and the format was much different from what we’re used to today. Whereas heats these days field two or four surfers, this event saw as many as 24 surfers in the water at one time. More arcane than that, there was no such thing as interference and it wasn’t uncommon for a handful of surfers to ride the same wave, all packed in like sardines at the take-off spot. Additionally, judges scored waves on a 30-point scale rather than the modern day ten-point scale. To say competitive surfing has changed is to understate the drastic transformation.

Starting in 1964, the International Surfing Federation’s World Surfing Championships ran every two years, and the first official world champions were Australians Midget Farrelly and Phyllis O’Donnell, winning competitions held at Manly Beach. The ISF’s World Surfing Championships ran through 1972 when the International Professional Surfers (IPS) came into effect, the very first governing body of the sport, and made it possible for surfers to be paid to compete. Events such as the Smirnoff Pro, The Duke Kahanamoku Classic and the Pipeline Masters began offering around $10,000 in prize money — cold, hard cash. Finally, surfers started to realize the potential surfing held as a financially viable career.

As the IPS ground to a progressive halt, Ian Cairns saw a need and launched the Association of Surfing Professionals, the ASP, in 1982. Professional surfers who previously competed on the IPS jumped ship to the ASP’s tour.

As of the 2014 tour season, the men compete for $500,000 prize purses at each of the 11 tour stops. The women divvy up a purse of $250,000 per stop. Add that to sponsorship dollars and you’ve got yourself a financially viable career. Though it’s rarely as easy as that. With the hoops surfers jump through to get to that point, competing for that kind of prize may as well be icing on the cake.