This Film Is About Women Who Surf, No Matter How Dangerous or Culturally Taboo It May Be

For German documentary filmmaker Dörthe Eickelberg, surfing is like a magic carpet ride. “Surfing is like an ode to life and freedom, but not for everyone,” she says. “In many cultures, women on surfboards are considered a provocation.”

Why is this? Her film, Chicks on Boards is about rebels claiming freedom against all odds.

Sabah, for example, will ride her last wave in Gaza. She is going to get married. Then her husband will make decisions for her. Meanwhile, Aneesha was expelled from her family in India because she wants to become a professional surfer. Suthu is the only black female surfer in the water and in love with another woman – a dangerous mix in South Africa. For perceived safety reasons, women were once not permitted at big wave contests in Hawaii. In England, Gwyn is making big waves without realizing it. She was the first in the water and still is at 72. Where there’s a will there’s a wave. Dörthe takes us to meet courageous people in places dominated by the clash between nature and culture.

Tell us a little about what you do and how you got into surfing.

I caught my first wave on camera, in the name of science. For 10 years, I have been hosting a TV show for the European culture channel ARTE and one day I found myself in Southern France with the topic, “waves”: In front of me was a giant soft board, a camera team and an instructor who was supposed to give me a crash course in surfing. So my first wave was aired on television and so was my crash a few seconds later. But I didn’t care. That moment, I was already hooked.

So what is Chicks on Boards?

Chicks on Boards is a documentary about women surfers who claim freedom against all odds. The project consists of different versions: A five-part series for  ARTE, a feature doc for festivals, and a two-piece for German and international television. The story is about five women and their struggle to live a self-determined life, and I meet these women in their preferred habitat: the water.

How did you get the idea of making a documentary about surfing and particularly of shining a light on the situation of many women in surfing?

Since I discovered surfing, I used every free minute between shoots to explore the waves of the nearest coastline. My choice of spots was rather linked to my work than the recommendations of surf guides. Often, I ended up in remote areas where surfers were a rare sight. It didn’t take me long to notice the further I travel, the fewer women I see in the water. That’s when I decided to search for these female pioneers who surf nevertheless.

How did you find your subjects for the documentary?

I mostly found them in the lineup or I was introduced to them by other locals. Then I spent some time with each of them. We went surfing, we had a tea or a beer together, we got to know each other. That allowed me to meet the potential protagonists on eye level and establish a trusted relationship. The surf performance was the least important quality I was looking for. I chose my heroines by their personality and their ability to reflect about their life and society. And I found really extraordinary individuals.

The only protagonist that I found through classic online research was Gwyn Haslock. My keywords in the search engine: “Oldest female surfer of Europe”. There she was. And what a catch.

Which girl or girls’ stories had the most impact on you not only as a filmmaker but as a person/woman?

I love all my protagonists and keep in touch with them even today. I guess what I understood in the making of this film is that most of these women — apart from the silver surfer in the UK — live in societies characterized by collectivism, where the individual must sacrifice his values and goals for the group’s greater good. So in these societies, you can absolutely count on your family members if you get sick or old. But if you have no family, you are lost. I guess that’s why these women are so much under pressure: They need to get married and have a family because no insurance and no pension would help them out if they waste too much time on self-fulfillment.

What are your plans with CoB? Tell us a little about the “movement”.

The impact of a wave can be a life-changing experience. The waiting for the swell can be a form of meditation, and the act of surfing can take on political dimensions. That’s the case with these women who break the stereotypes and role expectations within a world mostly dominated by (white) men. Even the surf industry used to make us believe that the typical surfer is young, white, and male. But the sea knows no borders, no skin color, no gender, no sexual orientation. And dogmas are not waterproof. That’s the beauty. During my research, I came across a lot of inspiring women who have a stunning story to tell. My dream is that these chicks on boards all connect and push each other into waves that they wouldn’t dare to take on their own. And that one day we don’t need a film like Chicks on Boards anymore because we see an equal amount of female and male surfers everywhere in the world, and it’s nothing special that the heroes of a story are women and the story is being told by a woman. 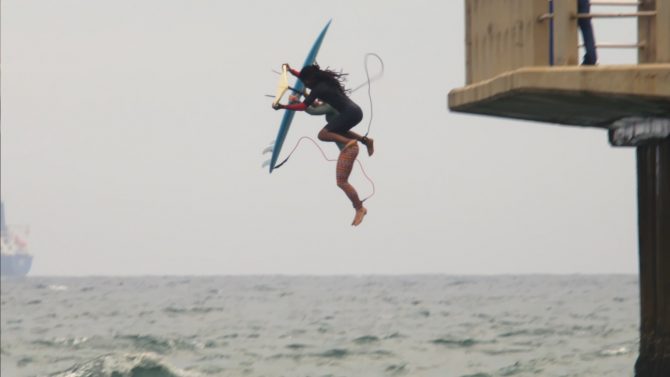 When and where will we be able to watch it?

The film is currently touring the festivals worldwide and will be aired most likely by the end of November, 2018. You can find info and the upcoming screening dates on Facebook and Instagram if you follow #chicksonboards.