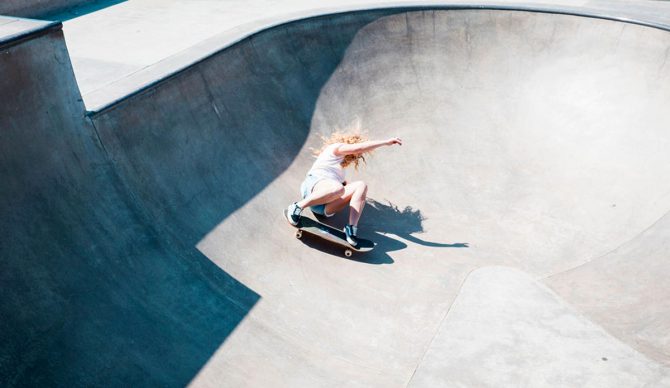 Female empowerment is a recurring theme across all aspects of social culture these days. Our feminist fore-mothers’ tremendous fight against injustice in the 1960s has evolved into a multitude of expressions today, from the rewriting of gender norms to intersectionality awareness to eco-feminism and the return to a collective nurturing from a toxic, industrialized, patriarchy.

So, what does this movement look like in the board sports space?

In the public’s and media’s eyes, the WSL has been applauded for leading the charge in offering equal pay for both male and female athletes. But on a grassroots level, it’s the community-based events that bring women together to celebrate their place in our sports. In Venice, California recently,  Untamed Daughters fit that definition to a tee.

The first-ever collaborative lovechild of the Changing Tides Foundation and GRL SWIRL took place this summer on the Venice boardwalk with an invite list of fifty women from Southern California and beyond. With both organizations’ strong foundation in community, creativity, and female empowerment, it was a collective of like-minded women on a mission to surf, skate, and communicate about ocean conservation and our part in a bigger, global consciousness shift.

As a social introvert and someone who’s never had more than a handful of close friends at a time, I was definitely a bit timid about attending. I couldn’t remember ever being in a room with more than 15 women at once, much less a packed lineup surfing or skating near a crowded boardwalk on a Saturday. I had no idea how powerful this experience would be, surrounded by women of all ages and backgrounds, who embodied strength, intuitive flow, and grace.

After a beach cleanup kicked things off, it wasn’t long before an unspoken consensus was reached as to why we were all there: we are living in a broken system. The ways of the past are failing us, the status quo is unacceptable, and it’s up to us to carve a new path for a future of collaboration, not competition, conservation, not exploitation.

From there, the hoots and hollers began. A wall of foam surfboards exploded into the lineup along with endless laughter, squeals, and cheers all around. Athletic experience ranged from Olympic athletes to lifelong surfers to complete newbies, but the excitement level was universal.

Next, we skated. Some girls wanted to skate the bowl, others wanted to cruise, and some were stepping on a board for the first time and just wanted some helpful hints. All levels were encouraged equally, with no question too stupid or attempt unsupported.

Everyone knows that when you step on a skateboard, you’re bound to fall. It’s just a fact. But everyone also knows that when you fall at the world-famous Venice skate park, everybody’s watching. It’s embarrassing, it sucks, and most of all, it fucking hurts. There can be a tendency to jump up, brush it off, and keep going when everything, actually, isn’t fine. But on one gnarly wipeout, I witnessed what seemed like a sacred protocol. One of GRL SWIRL’s co-founders approached the girl who’d fallen with a sense of calm. She casually walked across the park and came in close. “You sure you’re ok?” she whispered, subtly offering her arm as a brace to recenter and catch her breath. The girl allowed herself a moment to pause and really check-in. “I’m good,” she nodded. They made eye contact to affirm. My heart melted watching the understated but radical exchange of strength, vulnerability, and sisterhood.

Eventually, the skaters on the flats worked their way over to the park. Before we knew it, we had a massive congregation on the coping, hooting for our sisters ripping the bowl. Music was blasting, a dance party ensued. This was what we came for.

As the sun began to make its late afternoon descent, surf legend Rochelle Ballard gathered us all for a closing yoga flow and centering meditation on the beach. It was the perfect opportunity to breathe and decompress, massage sore muscles, thank our bodies for a hard day’s work, and truly appreciate how impactful the experience had been.

Later that night, we headed to the after-party and it was almost strange to see male faces. Nonetheless, we skated the mini ramp and danced our brains out late into the night. The crew cheered as someone read the giant graffiti tagged across the wall: “Can’t Steal Our Vibe…”

We couldn’t have put it better ourselves. 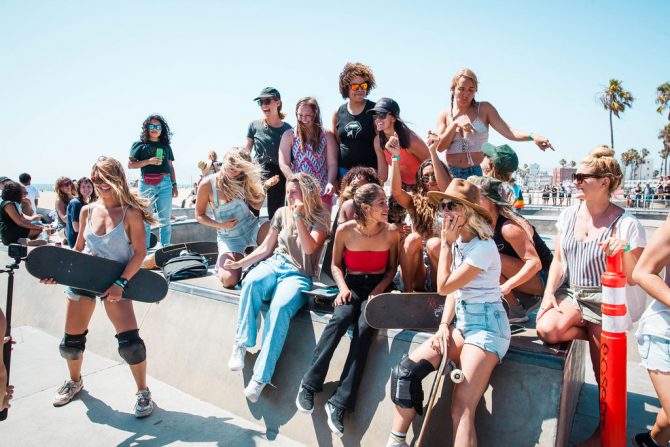 These are Untamed Daughters Photo: @jessicawhitehead