Lena Stoffel was born and raised in Leutkirch im Allgäu, which is a small city in the alpine upland of Germany. After graduating from school in 2003, she spent half a year in Lisbon, Portugal working as an au pair while surfing as much as she could. In 2004, she started her studies in physical education at Innsbruck, where she still lives today. She graduated as a bachelor of science in health and competitive sports in the summer of 2008. She started skiing very early as both her parents are qualified ski instructors. Soon thereafter, she got into alpine ski racing. She continued ski racing until the age of 17, winning the German Junior Championships in slalom in 2003. From 17 on, she decided to leave the gates behind and do what she loves best: freeride. She has competed in the X Games and Nine Queens, and has enjoyed several parts in big European Freeski movies, such as Aestivation. Two big knee injuries forced her to give up her Olympic dream but allowed her to focus on riding powder and exploring the mountains. When she is not skiing, she loves to surf. She spends as much time as possible on the sea and find that it is a great compliment to being in the mountains. 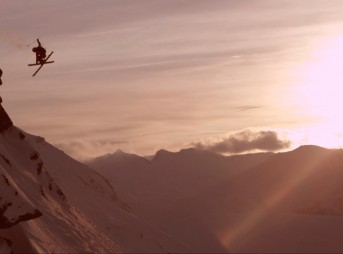 At Home in the Alps, On a Journey of “Wonderlust”