Adidas and Parley Up the Ante With Recycled Ocean Waste Shoes in 2019; Vow to Make 11 Million Pairs 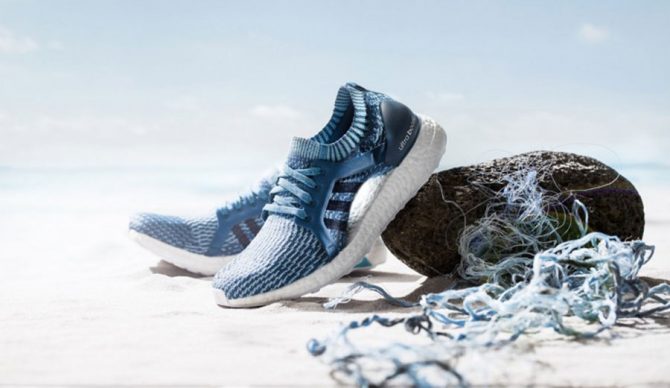 Adidas. Making shoes out of garbage. We like. Photo: Adidas

Since 2015, the Adidas–Parley for the Oceans partnership has produced millions of pairs of sneakers, jerseys, and everyday clothes using yarns and filaments recycled from trash found in the sea and illegal deep-sea gill nets. There hasn’t been such a visibly large scale effort by a name brand manufacturer to cut down its footprint and impact on the ocean.

From a conservation standpoint, the campaign’s impacted the company culture so drastically a spokesperson for the German sportswear manufacturer says they saved more than 40 tons of plastic waste in their offices, retail stores, warehouses, and distribution centers in 2018, making conscious efforts to get rid of plastic bags in retail stores and using what they say are more sustainable materials in the production process.

“With Adidas products made from recycled plastic, we offer our consumers real added value beyond the look, functionality, and quality of the product, because every shoe is a small contribution to the preservation of our oceans,” said Eric Liedtke, Adidas Executive Board Member.

Maybe what’s most surprising is how successful the Adidas-Parley partnership has been, financially. At $160 to more than $200 a pair, they’re in a high price point for sneakers, which would lead you to assume they’d stay in some kind of special edition or limited run category. That might have been true when they released 7,000 pairs in their first line, a relative drop in the ocean for an industry that produced 23 billion pairs of shoes in 2015 when they first introduced the concept. That same year, Esquire magazine estimated Adidas’ competitor, Nike, was selling shoes at a rate of 25 pairs per second. The trajectory since then has been pretty aggressive, though.

In 2017, Adidas and Parley produced one million pairs of shoes. By the end of 2018, the company said they were up to five million pairs annually, which Forbes projected would net them over $1 billion. This week, Liedtke announced that in 2019 the company plans to produce 11 million pairs of shoes containing recycled ocean plastic. Those are massive numbers, considering the original estimate was that each pair contained the equivalent of 12 plastic bottles worth of waste. That equates to 132 million bottles worth of plastic waste going into one shoe line alone.