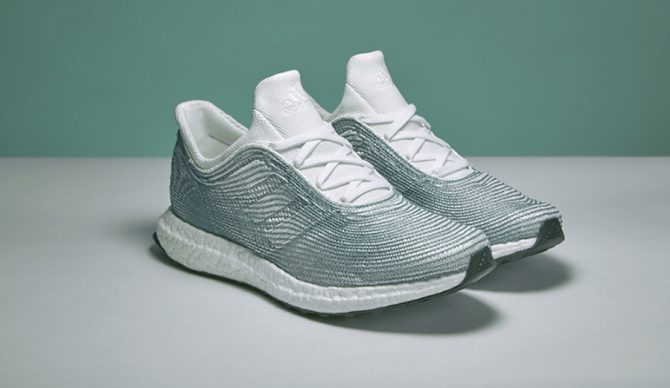 A few years ago, Adidas teamed up with Parley for the Oceans to design and distribute a pair of shoes made of ocean waste.  The shoe consisted of an upper made entirely of yarns and filaments recycled from trash found in the sea and illegal deep-sea gill nets. The nets were retrieved by another of Parley’s partners, Sea Shepherd,  an organization that once spent 110 days tracking and chasing an illegal poaching vessel off the coast of West Africa.

The strategy was a hit. They launched a first edition limited run of just 7,000 shoes made with the equivalent of 12 plastic bottles worth of waste, which sold out with ease. According to an article published by Forbes, the campaign has grown to the point that it will earn the German sportswear brand $1 Billion with its release of another five million shoes at around $220 a pair.

That covers just one literal drop in the company’s ocean of products, though. Their partnership with Parley has actually been expanding throughout their line since they began working together in April of 2015.

In 2016, Parley and Adidas teamed up with European soccer clubs Real Madrid and Bayern Munich to launch the “For The Oceans” line, a special edition run of kits made from recyclable ocean waste.

“This represents another step on the journey of Adidas and Parley for the Oceans. But we won’t stop there. We will make one million pairs of shoes using Parley Ocean Plastic in 2017 – and our ultimate ambition is to eliminate virgin plastic from our supply chain,” Eric Liedtke, Adidas Group Executive Board member responsible for Global Brands, said at the time.

Sure enough, in 2017 Adidas went on to sell one million pairs of its ocean waste shoes. Adidas brought its “For the Oceans” kits back for the 2018 World Cup. And now, browsing the company’s website, there’s an entire Parley line of apparel, from tee-shirts to shorts, windbreaker jackets, and more. Right now, the Parley line has a little more than 80 different products for men, women, and children combined.

“We have already taken the first steps to reduce and ultimately eliminate virgin and single-use plastic from our products. In doing so, we have shown that it is possible and that people care – but now we must accelerate and scale,” Eric Liedtke an executive board member, for Adidas told Forbes.

All this adds up to Adidas’ announcement this year that they now plan to use repurposed plastic in all of the products it sells by 2024. In shoes alone, the brand manufactures and sells 450 million pairs annually.