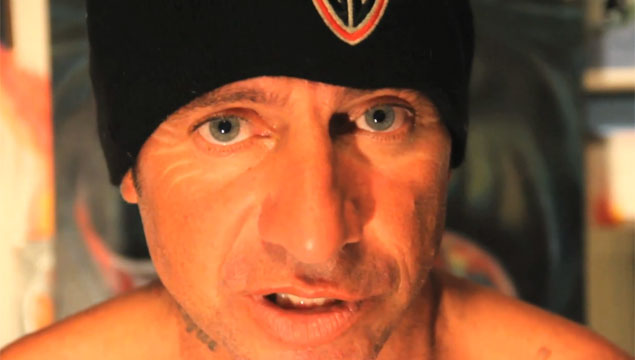 I was surprised last fall when I opened my copy of The New York Times and saw a photo of Santa Cruz surfer Anthony Ruffo lying serenely on a beach. Ruffo? In the Times? Weird. The story was heartbreaking – former pro surfer busted for dealing meth, awaiting trial, making progress in rehab – but I didn’t know what to think of it. Surfers getting involved with meth isn’t exactly new, and Santa Cruz has long been associated with a nasty underground drug scene. I felt a little sad, put the paper down and promptly forgot about it.

A few weeks ago, I was in Santa Cruz trying to catch a the tail end of a dying west swell, when I heard the news that Ruffo was sentenced to a two-year jail term (because of overcrowding in California’s state penal system, he will serve half that sentence, at most). Coincidentally, earlier that day, I had read an article in the Santa Cruz Sentinel describing former pro and Santa Cruz resident Matt Rockhold’s successful life after a career in surfing. Ruffo and Rockhold, it seemed, had evolved along different paths. Ruffo’s road had been darkened by drug abuse, while Rockhold owned his own business (a hair salon with his wife), and was well-positioned to transition into regular, workaday life.

For the first time, after reading the piece on Rockhold, and thinking about how shitty Ruffo’s next year was about to be, the ASP’s new drug testing policy (effective for the first time this past week at Snapper Rocks) suddenly made a little more sense. When I had first heard about the ASP’s plan, I thought it was ridiculous – an unnecessary and unwelcome intrusion in the personal lives of its athletes. Another step in surf marketing’s march to sterilize what was once an outsider’s pursuit.

But I couldn’t help but wonder what might have happened had Ruffo failed a drug test during his competition years. Maybe nothing. Maybe he would have continued to struggle with addiction and found another, untested substance to abuse. Or, it may have been an early wake-up call, and prompted Ruffo to embrace the kind of rehabilitation program that has seen him sober for nearly a year, and has kept him, presumably, from dealing meth–the crime for which he’ll spend a year in jail. It quite possibly could have saved the beautiful life of Andy Irons. But that’s conjecture.

The ASP, of course, is nobody’s daddy, and ultimately shouldn’t be responsible for regulating the private lives of pro surfers. Yet pro surfers live in an artificially constructed fantasyland, one made partially possible by the ASP-sanctioned World Tour, and one that requires little personal responsibility on the part of competitors, short of showing up for their heats. The freewheeling Tour environment practically begs for poor decision-making. “Going to Brazil and getting $9 grams of coke was part of the fun,” Ruffo told the Times when discussing life as a traveling contest surfer. “Guys were coming out of their rooms loaded for their heats, it was part of the norm.”

P.R. move by the ASP? Absolutely possible. Hardcore drug use may be outlier behavior among elite-level surfers. The new anti-doping policy may ultimately do nothing but bust guys for smoking flat-spell joints in the middle of Fiji, or for doing a few lines in a Biarritz night club. But if the problem users, if the guys like Ruffo and Irons are made to at least acknowledge their substance abuse issues, and are forced to confront how their addictions may affect the only professional livelihood they know, then maybe the ASP as a tattle-tale isn’t such a bad thing at all.

A documentary about Anthony Ruffo is currently in the works. The trailer can be viewed below.