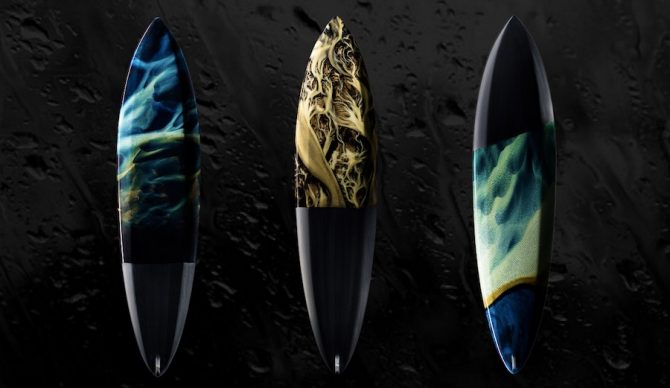 In theory these things are rideable. But at $4500 a pop, they may best be left hanging on the wall. Also, they’re just so pretty. Photo: Album

Surfboards, naturally, straddle a fine line between sculpture and vessel. Form and function are equal considerations when shaping. Color work, gloss, matte, and polish are all jobs of professional glassing teams around the globe. The final product is a work of art, really. One that, it just so happens, can also be used in the ocean.

The leap from lineup to fine art gallery is not so dramatic when it comes down to it. How often, for instance, is a board, “almost too beautiful,” to wax up and ride?

That’s certainly the case when it comes to Album Surfboards. Recently the crew at Album teamed up with Chris Burkard to create some of the most beautiful surfboards ever.

“I’ve always been a fan of Chris’ photography,” said Matt Parker, the man behind Album. “I heard he had always wanted to do something with his photography on surfboards… Basically my good friend’s sister lives by him. And there were all these little things, and it just made sense.” 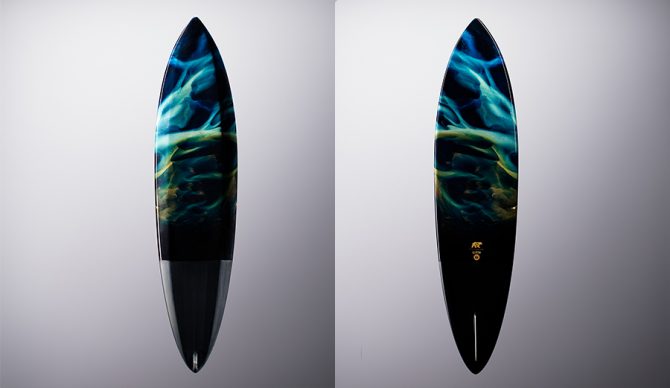 Thjorsa. Flowing out through the narrow gorges of Iceland’s highlands, the Þjórsá (Thjorsa) is Iceland’s longest river. The milky and vibrant texture captured by Chris comes from the Hofsjökull glacier as it mixes with colorful sediment along the way. Photo/Words: Album

When it came down to figuring out what photos to put on the boards, Chris and Matt decided to go with more abstract pieces. “They’re all photos of glacial river flows in Iceland shot from above, like from 5,000 ft. up,” said Matt. “It’s crazy because the photos have all these wild colors. It sort of looks like resin art.”

Instead of being printed onto a fabric or rice paper as in traditional resin inlays, the hi-res photos used to create the boards were printed onto fiberglass cloth. The result is the images wrap around the board, and the images themselves have a three-dimensional quality to them that can really only be appreciated in person. 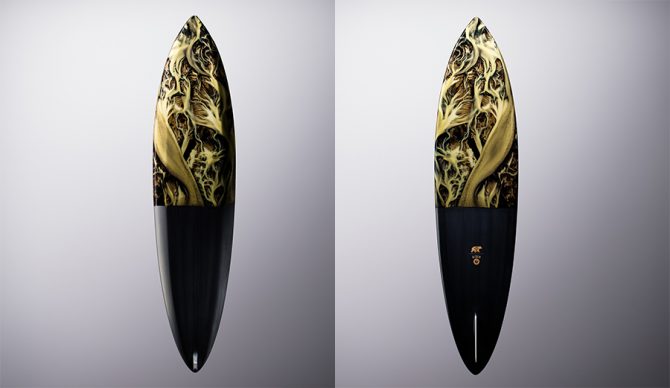 Tungnaá. With sandy hues of brown and beige, the Tungnaá glacial river flows through the southern highlands of Iceland. In this photograph taken from roughly 5000 feet, Chris perfectly captures its other-worldly braided pattern. Photo/Words: Album

While Chris has made a name for himself for pushing the limits of surf photography, Matt Parker has similarly been pushing board design in new directions – experimenting with asymmetrical shapes, for example – for some time. “I just think in surfing everybody’s so worried about expression,” he said. “But for me, I push for color, you know. Why not?” 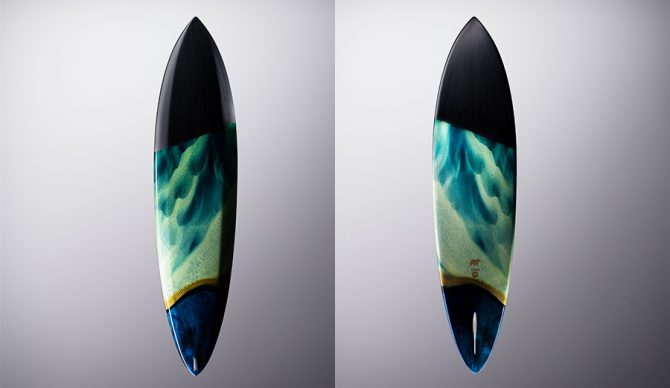 Hólmsá. Drawing its source from the Mýr­dalsjökull glacier, the Hólmsá river is an infusion of glacial runoff and sediment from the Katla volcano’s eruptions. The diagonal composition of matte black on this board accentuates the free-flowing lines and texture. Photo/Words: Album

And check out the video below for a behind the scenes look at how these boards were made, and be sure to check out both Album and Chris’ websites.