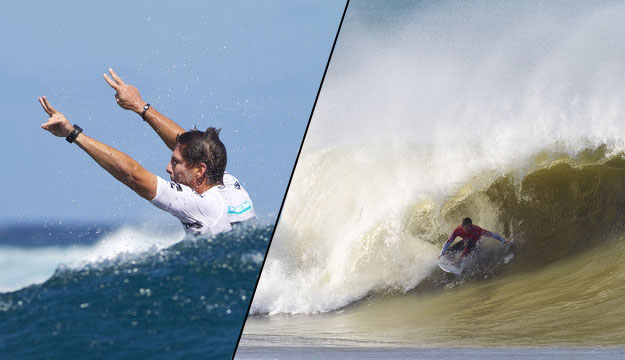 Christian Fletcher believes that Billabong was looking out for Irons. “Would you put a bunch of money into something without putting a good security system on it, then keeping an eye on it?” he asks, rhetorically. Irons after his last career victory in Tahiti (L) and competing in his final full ASP contest in Portugal (R). Photos: ASP/Kirstin

Like many of the current crop of famous surfers, Irons was, in part, raised by the surf industry. His professional career began with his win at the HIC Pipleline Pro in 1996, when he was still a senior in high school. In 2001, he became one of the wealthiest surfers in the world after signing with Billabong for a reported $650,000 a year. While the generous compensation was a novelty at the time, one thing remained the same:

“Temptation,” says agent and former pro surfer, Johnn Shimooka, whose company, Consolidated Sports, represents elite pro surfers like Jordy Smith, Laura Enever, and Michel Bourez. “Everyone wants a piece of you. Whether you are fifty in the world and have a huge domestic following or you’re a world champ. These days there is so much on the line, so much money and prestige.”

Does it go to surfers’ heads?  “Sure,” he says, not referring specifically to Irons, but to the young surfers he has dealt with both as an agent and through managing Quiksilver’s Young Guns program. “All young surfers are prima donnas. I know I was. There is a lot of pressure on these kids, and they run the very real danger of burning out from being exposed to too much, too soon. It’s up to the individual athlete to have a support group around them that is honest and open and will bring them back down to earth when they get too big for their britches.”

“If I had a son or a daughter who was in that whole [sponsorship] program…” Brewer begins, then falters. “…It’s virtually unchaperoned. Maybe they need team managers to watch over the kids or participate in their lives a little more. It’s got to be someone they respect.”

In different interviews, industry workers described team managers as everything from “glorified babysitters,” to “frustrated, ex-pro surfers,” to “some of the toughest, most underpaid and most underrated people in pro surfing.”

That last one came from Shimooka, though he agrees that babysitting is part of the job. “You end up being the first line of emotional support for a lot of these kids, and if you commit to looking out for them, well, you had better look out for them.”

I ask him how far that statement extends – these are, after all, other people’s children. “I like to say: ‘You’re never bigger than the game,’” says Shimooka. “What I mean is, unless you’re Kelly Slater, to me you have to wipe your own ass. I will help you to the best of my ability, but you have to draw the line somewhere or surfers will and can take advantage of a team manager to the point where it becomes a joke.”

Shimooka declined to comment directly on Irons, but my overarching question was: if sponsors play such a large role in a surfer’s support network, did Billabong have a responsibility to help Irons, effectively just an employee of their company, albeit an important one, get clean?

Fletcher believes that Billabong was looking out for Irons. “Would you put a bunch of money into something without putting a good security system on it, then keeping an eye on it?” he asks, rhetorically. But Fletcher was simultaneously dismissive of managers’ ability to influence surfers’ habits – especially as related to his own troubled career. “Wow, like that’s going to make an impact. A lot of people told me I was fucking up, but they were full blown drug addicts themselves.”

Fletcher was a pro surfer in a very different era, and he isn’t implying that the surfing industry is overflowing with drug addicts. It is not, however, by his or anyone else interviewed for this article’s estimations, an easy place to get clean.

Another industry insider I met at the Rip Curl Pro Search in Puerto Rico mentioned a surfer who was particularly distraught about Irons’ death because they had helped each other “stay on the wagon” in the past: “I hope this makes some of the other guys on tour wake up and re-evaluate their lives a bit,” he said.

Many people I’ve spoken with on and off the record show flashes of survivors’ guilt, perhaps best explained by Brewer’s age-old surfing cliché “none of us are saints.”  Fletcher, on the other hand, rejects the idea of recriminations. “Kids in the surf industry need to be looked out for. They are young and dumb and have no coping skills, and they are surrounded by Yes Men giving them massive egos. But at some point you need to take responsibility for yourself. I’m forty years old, and I’ve had a lot of friends die recently. People try to place blame everywhere when people overdose. The way I look at it is: how old is the guy?  And when is he going to become responsible for his own actions?”

But even Fletcher softens slightly and takes on a semi-philosophical tone when asked about the difficulties of being a pro surfer. “From the outside looking in, it’s the best job in the world. But making money can take the passion out of it. Not for everyone, but for me it did. If you are expecting to be paid, there are obligations you have to fulfill. Whether that is a wave pool in Arizona or talking to a guy in a bar who is drunk and bugging the shit out of you. Sometimes it takes a lot of fucking work.”

Shimooka agrees. “Pro surfers spend a lot of time away from the comforts of home – their friends, their girlfriends, even little things like their own pillows. The road gets lonely. You are out there on your own, against the world, and the world is a very big place. Sure, if you are on a roll, everyone wants to know you, but when you can’t get results it’s easy to fall off track. I encourage you to try and be a pro athlete. It ain’t easy. Even the best surfers in the world get lonely, even multiple [time] world champions.”

“Andy was too important to the industry,” says Brewer. “He was a hero, and that’s how they wanted him to go out. Dengue fever? Yea, right. One in a fucking million die of Dengue.”

I ask him if official revelations of drug use will diminish his legacy. “No, not at all. He’s like Jimi Hendrix. He was already great, and now that he’s gone it just carries on that mystique. It’s almost like a marketing tool.”