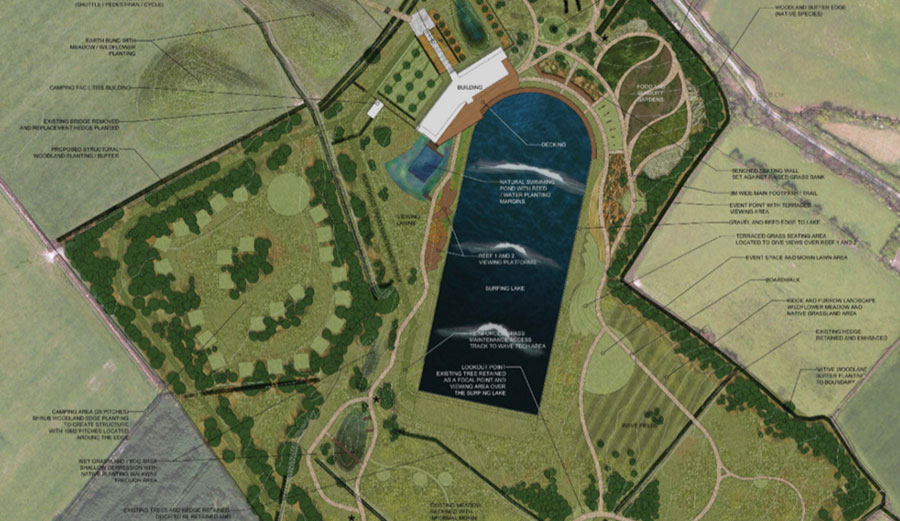 For a few years, there was an interesting race in wave pool technology. WaveGarden set up shop and released a few clips that spun the surf world into a frenzy. Investors snapped up their tech and made plans for wave pools all over the place. Surf Snowdonia landed in the pole position, opened for a few days to mixed reviews, ran a few events, and broke down a few times. Then, of course, Kelly Slater came from behind at full sprint and left everyone in the dust with his freak of mechanical engineering, but there are still a few companies out there that are toying with the idea of creating a surfable wave, and one that doesn’t use Kelly’s pool technology. The Wave Bristol is one of those places, and a few days ago, it finally got the go-ahead to break ground.

This week in South Gloucestershire, England, the city council gave permission to start digging up 40-acres of land for a manmade surfing lake. It’s been a long time coming–the first plans were actually approved around three years ago, but because of changes in technology, they decided to wait a while.

“I lost many months sleep over this one,” wrote Nick Hounsfield, founder of The Wave, about the switch to a technology called SurfLoch. “However, the more and more we worked with SurfLoch and met their team, interrogated the engineering and watched the incredible waves being made…. the easier it became, until eventually I was in no doubt that Tom Lochtefeld, his team, and his 25 years of experience made him the ultimate wave maker. Making waves is actually very straight forward. Making commercially viable, ocean-like waves with ultimate controllability is the key. SurfLoch are, no doubt, the masters of this!”

When all is said and done, the lake will end up costing somewhere around $8 million. As well as the wave, it will have a swimming pool, a camping area, an amphitheater, and an education center. Plans call for three surf zones: Head high waves for advanced surfers, waist to chest high secondary waves for intermediate and knee to waist high beginner waves.

“The project has surfing at its heart but there will be so much more,” it says on the website. “We want this space to help educate and inspire people on a whole range of topics, from marine conservation to science and technology. We want it to inspire healthier lifestyles and to make a positive social impact on the lives of those who visit or interact with us. We want to use The Wave as a place to showcase the use of renewable energy and sustainable building techniques. Most importantly, we want to do all of this whilst having a tonne of fun in the process.”