Ferguson Affects Everyone: An Opinion from the Privileged, White Surfer 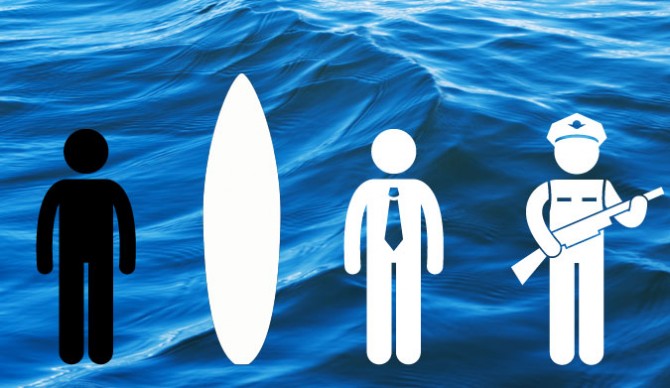 “We have the time to play in the ocean, the money to spend on overpriced accessories. We don’t really have it so bad. But the people of Ferguson, I think they do.”

It wasn’t until I was in my thirties that I realized how easy my life has been.

Because, I mean, life is hard. For everyone. You spend so much time worrying, feeling like shit, dreading whatever may come. It’s all just one long empty pointless struggle.

But, c’mon…  I grew up in Southern California, in the shadow of some of the wealthiest people in our country.  I thought I was poor, that I had it rough, because the spoiled little brat down the street got a new Mustang for his first car and I had to make do with a hand me down ’67 VW bus.  Poor little me.  Life’s so tough.

You realize though, or, at least, I did, that shit wasn’t ever so bad.  Yeah, your head’s a swirling ball of insanity and self-loathing, but you were fed, you surfed, you lived in the lap of luxury- compared to what large portions of our country deal with on a daily basis.

Watching the Ferguson kerfuffle develop reminded me of how hard I thought I had it.  Not because of anything the protesters, or rioters, or any other group of people said or did on the scene, but because of the reactions of people I know, people like me.  White people with money.  Maybe not millionaires, but people with enough.  More than enough.

I’ll admit, I don’t like police.  I don’t like what they do, I don’t like what they represent.  I’ve never had a cop make me feel safer, never had one to come my rescue in a moment of need.  My entire life they’ve been blue-shirted assholes dedicated to writing me skateboarding tickets, telling me I can’t walk a bicycle onto the Hermosa Beach pier, or parking in the shade for hours while meth addicts run rampant on the streets of Oahu.

Lucky for me, I’m a rich white kid.  I can tell, and have told, a rude cop to go fuck himself.  Even though I don’t like them, I feel safe in the knowledge that they don’t have the balls to abuse me.  They can’t shoot me and frame me for a crime. They can’t tase me and charge me with resisting arrest.  They can’t beat the shit out of me and get off scot-free.  I have a spotless record, always been able to talk my way out of a jam.  Never did time.  I can afford an attorney.

It’s hard to consider racism when you’ve never encountered it. But you can imagine. Living in Hawaii, being called a haole, rubs a lot of transplants wrong.  Being identified based on race, treated as an outsider, man, that’s gotta hurt.  Only the reality of haole-ness out here doesn’t mean that you can’t find a job or pay your bills.  At least, no more so than any other poor fucker stuck on a rock in the middle of the Pacific.

I’ve heard and read people saying that racism is long dead, the playing field level.  To be honest, I don’t really know any black people.  I grew up in a beach community where, outside of encountering Shaq at Shakey’s Pizza, I never saw anyone darker than myself.  I do know that Manhattan Beach is home to a park that sits on the site of a former black beach resort.  The land was rezoned and eminent domain was used to force African Americans out.

Like everyone alive I feel rage and frustration on a daily basis.  Life is unfair and sometimes, no matter how hard you try, the cards are stacked against you.  And I have it so easy.  But I can imagine it burning and boiling until I lost my mind, until I wanted nothing more than to lash out and watch everything around me burn.  Especially if I had no stake in my environment.  If I lived in a rental my entire life, if I shopped at stores owned by people who lived outside my community, sucking money out and only paying back in in the form of low paid no-future jobs.  If I felt like the people who gave lip service to protecting me were really there to keep me contained.  If I thought they could beat or rob or kill me without being held accountable for their actions I would lose my fucking mind.

But that’s not my reality.  No one owned my ancestors, no one ever turned a fire hose on my grandmother.

We’re tempted to feel our trials are always the greater, that no one’s experience could be any more unfair or onerous or outright impossible to live with.  But that’s just not true.  We have the time to play in the ocean, the money to spend on overpriced accessories.  We don’t really have it so bad.

But the people of Ferguson, I think they do.  I have no other proof than their word, but that’s enough for me.  When a group of people are crying for help, whether in word or deed, we should give it.  If a community claims their police force is out of control, I’d say they’re qualified to judge.

I stand with the people of Ferguson.  I empathize with their fear and anger.  I know that’s not worth a hell of a lot, living thousands of miles away in a tropical paradise most of them will never see.  But I’m on their side.  If for no other reason than the fact that if a cop shot me you could bet your ass he’d be fucking indicted.