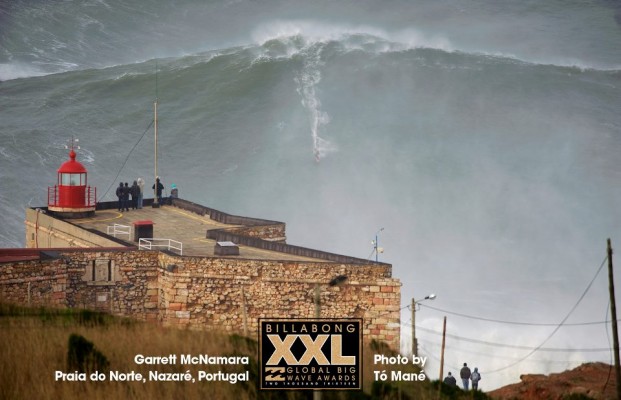 I’m getting sick of the way surf media treats Garrett McNamara. And I never thought I’d say that. Especially given that my first exposure to GMac was through a seemingly indomitable engine of self-promotion – one that lead to calving glacier surfing and other awesomely outrageous feats born of the same, made-for-TV scripting. But last week, my friends, Garrett McNamara and his crew surfed some terrifyingly gigantic waves in Portugal, and whatever praise that’s coming their way – claims of 100-foot and beyond, they deserve.

And I’d like to clarify, that as far as I know, those claims were not self-announced. Because that’s super important to us arbiters of surf etiquette. No claims, brah! Rather, they were bestowed upon him by eager headline-makers. As they should be. It’s big news. Literally.

But you’d be forgiven for missing the event altogether if you get your news exclusively from surf media outlets. (Do not allow that to happen. Seriously.) Nowhere in our precious little surf publishing world was McNamara heralded as a frontiersman or innovator for pushing the limits of what’s humanly possible on a surfboard. Rather, we mostly saw questions and incredulity. “Is this really 100-feet? Biggest wave ever surfed? Garrett McNamara is at it again…!?!?!? Decide for yourself…”

I realize that upon closer scrutiny, the wave itself has been described as mush(ier) than other big wave destinations, but, man, those images, those things, are worth discussing, sharing, #gramming, re-gramming, whatever. Indisputably, they are. And what percentage of the surfing population is really qualified to critique a wave of that size with any degree of authority? Seriously. .000000001%? Not even. Maybe if we round up.

I’m all for skepticism in reporting (it’s among my favorite things), but it’s as if surf media views Garrett McNamara as some mischievous ne’er–do–well, instead of one of the most fearless motherf*ckers on this planet – whose determination to push human limits has thrust surfing into mainstream relevance and public consciousness time and again.

It’s a funny thing about surf culture. The anti-claiming phenomenon. The fact that we need USA Today or Gawker to announce mankind’s conquest of the 100-foot wave rather than make that distinction for ourselves is absurd. You’d think we’d be all over that, right? But by the time the scientists in lab coats at Billabong XXL arrive at an unequivocal measurement of that wave’s exact height (good luck with that), the world already moved on. It’s big enough to matter to people living in Minnetonka, Minnesota. So claim it.

I’m all for humility. It’s possibly the most attractive quality in a truly self-confident person, but certain scenarios call for bravado: The touchdown dance. The swagger dunk. The post-win backflip. We landed on the moon! Hell yeah! This is touchdown dance time. And I don’t really give a sh*t if that wave was definitively 100-feet or not. I bet Garrett doesn’t either. However, I do believe that Garrett McNamara and the surfers who tracked that swell and rode it deserve nothing but praise (especially from within the surf world). Loud, obnoxious praise from Anderson Cooper and Oprah and Jimmy Kimmel, too. Keep it coming. And next time, maybe we can claim it before AC360 does – instead of the other way around.