When [Gerard Butler] explains it, he gets pretty close to doing so and even with all the water safety and everything there. But he handled it, so my hat’s off to him. For someone who had only started surfing maybe five months prior to that day, not that many people could have handled it as well as he did and I think a huge part of it, I’d attribute to the fact that he really did involve himself in the character that was Frosty and what he was teaching Jay. As I’m sure you saw in the movie, everything he speaks of, he actually took to heart and applied to this real life scenario. Anyways, it’s one of those “all’s well that ends well,” scenarios. It was a learning lesson for all involved, and if anything it adds the story of making this movie come to life.

In my younger years I really only knew Jay as the surfer, from the magazines and the stories I had heard. I knew kind of the community that was Santa Cruz at the time and how he was just a positive character, but the actual background of his life and upbringing and challenges with his home life, I didn’t find out until later on down the road when I became close friends with some of his closer friends in Northern California. So before coming into this movie, I had a deeper insight into his life, but when I was young, he was this hero of mine that I looked up to so much, but I had no idea into that back story.

Knowing that surfers can be pretty harsh critics of Hollywood surf films, do you think surfers will enjoy Chasing Mavericks?

I do. I think the imagery that was captured out there was incredible. Big waves have never been seen or documented on that type of camera equipment before or those angles and other than a couple of documentaries, it rare to really present the story of the mental preparation and challenges and the physical preparation and challenges that big wave surfers are forced to endure. That said, I think it’s going to shed a lot of light on the sport of big wave surfing and surfing in general.

Besides Chasing Mavericks (since you’re in it), what’s your favorite Hollywood surf film?

I would say Big Wednesday was pretty damn good. Obviously, for the time it came out especially. That would be my first pick.

So when’s your next onscreen appearance?

No. No. This was an opportunity that came about as a product of my life’s passion and dedication to big wave surfing not as a break-in to the Hollywood acting world. If something else were to come along that was able to involve the two together I wouldn’t necessarily be against it, but I’m not out there actively pursuing an acting career. And I can say that with the most sincerity and confidence. 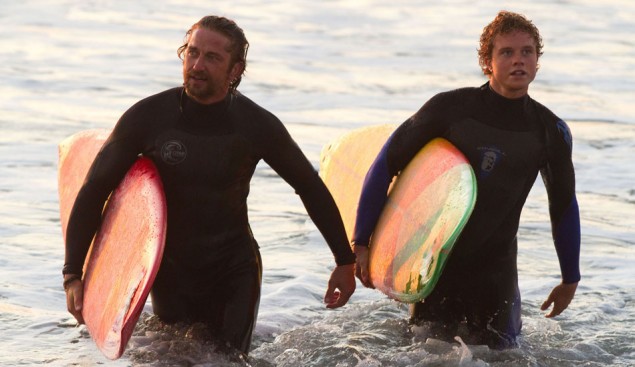 Gerard Butler and Jonny Weston making their way out of the water during a scene in Chasing Mavericks. Photo: 20th Century Fox