Is This $33,000 Mobile Office the Workspace of the Future?

Few people really love going to the same office every day. Personally, I’m horrible at it. I hate it. I drove 40 minutes this morning to leave my wifi enabled home by the beach so I could open up my laptop in another wifi enabled building by the beach in a city six miles down the road. I should also mention there’s nobody else here at the moment, which has sparked the urge to pack up that laptop and go sit at another wifi enabled establishment on the beach.

Sure, I’m digging heavy into some hardcore millennial first world problems here but I know I’m not alone. In today’s business world more and more “work” can be done mobile. As a surfer this is an awesome reality. Many of us already want to be out and about to begin with, but at some point we have to hunker down in front of a computer to answer emails, read any news or reports that are relevant to our daily job functions, be creative, build spreadsheets, or whatever the hell else you might have to do while wishing you were out surfing.

Tim Stempel and Ryan Woldt know the struggle also. As entrepreneurs with no established office they would regularly meet at a single beach side bench to talk business. “Our first meeting he showed up with some work on spreadsheets,” Ryan says. “I had some sketches on napkins I had done in a coffee shop. So what were they talking about in their meetings? They were talking about the places they wanted to be before and after work: outside. Looking at the same walls in a coffee shop or home office wasn’t very inspiring, so they came up with the idea to build what’s called the Adventure Lab. It’s part mobile surf and adventure wagon, part office space. It’s equipped with Wifi, desks, printing capabilities (who prints stuff?), a space for conferences and presentations, coffee (because it’s a must) and USB and solar powered outlets. And that just covers some of the work necessities. One Wild Life’s mobile office also comes equipped with bicycle racks, surfboard racks, a rooftop deck and storage, gear lockers, and an outdoor shower. Essentially they’ve built a road trip machine that won’t force you to unplug from the daily grind. I prefer the glass half full approach; it’s an office that won’t keep you tethered to the office so you can get out and do what you love most, then come back to that screen refreshed and inspired.

Their motivation is simply to get more people working outside, where they probably already want to be anyways, while building stronger communities. Let’s face it, your office isn’t the most enthralling social filter (bad for business) and you’re probably not that productive on the clock anyway (also bad for business). Most of all I think it promotes a healthier balance between work and play, finding ways to mix the two.

Editor’s Note: You can learn more about the One Wild Life Adventure Lab here and you find stories about One Wild Life’s crowd funding campaign here. 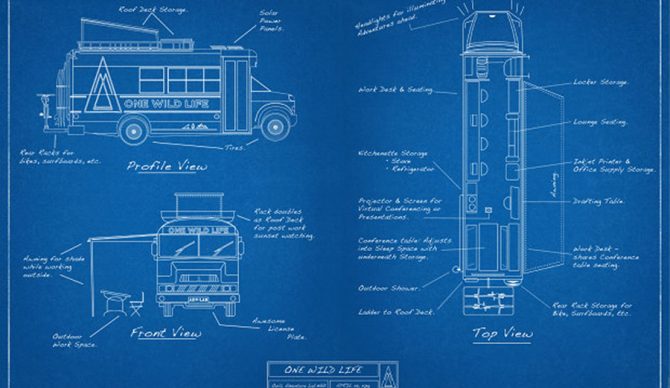